Rocky Horror is Back at The Boom and We’re So Glad! 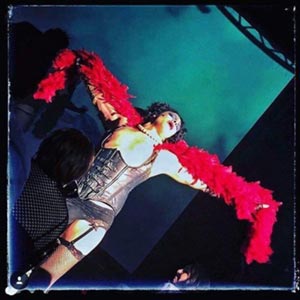 By Jillian Ball and Adrienne Proctor

Oh, Brad! The Rocky Horror Picture Show at The Boom is an interactive crazy train that’s an absolute blast from start to finish.

Joshua McGowen is amazing as the twisted “sweet transvestite” Dr. Frank N. Furter. McGowen embodies the role with heat and attitude, making his own tweaks while staying true to the original. His makeup is gorgeous and his attitude is sharp. He has the audience enthralled from the second he appears onstage. However frantic this night may be, one thing is for certain. This is McGowen’s world, and we’re all just playing in it.

Paul Stafford as Riff Raff and Jessica Carabajal as Magenta are hilarious, heinous and hellish fun. Stafford’s quips and vulgar hatred are better than the smug movie version of Riff Raff. Kara Chapman as poor, helpless Janet and Brett Young as her even more helpless fiancé Brad are perfect. It all culminates into a night of well organized chaos.

There’s no such thing as a fourth wall in this show, and the audience is made to be a part of the performance, however reluctant they may be at first. Eventually everyone catches on, and audience participation is the name of the game. Simply embracing it is the only option to guarantee a good time.

Unsuspecting first-timers find themselves dragged (literally) onto the stage by Riff-Raff and Magenta before the show even begins. The rarely seen on-stage appearance of two Oklahoma Art Scene and Hurd reviewers occurs this night, and we are still reliving it! Jillian says “Being on stage was funny and I actually enjoyed being picked, even with a huge red V on my forehead! Also made me really glad I tried with my outfit.” Adrienne agrees “I loved every second of it and tried to banter back and forth with the actors. They’re so quick witted! I tried to be a good sport about it and it really was fun.” 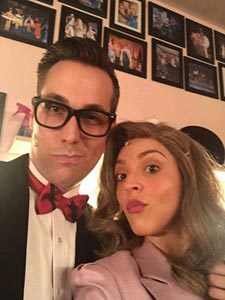 The Boom is one of the best places for Rocky Horror, despite any tight squeezes. The closeness actually enhances the immediacy of the show and reminds the audience that you’re more than just a spectator.

Give yourself over to absolute pleasure! There’s no need to overanalyze or even think it through. You may not even know what’s going on at times, but that just adds to the fun. Don’t try to find a plot, although there is one. The movie plays in the background and the cast acts as mimics, singing the lyrics and speaking the infamous dialogue over their silver screen counterparts. The audience is encouraged to yell along and insult the characters right back, even referring to Janet as “slut!” every time her name is said. Chapman responds back innocently, “I’m not, I swear!” McGowen prowls through the tables of guests, even offering “haircuts” with his meat carver prop and working people over with his glittered eyes. Stafford trudges through as well, bringing his insults and disgust along with him. Chapman and Young spend the duration of the show running aimlessly through the crowd, trying to escape their inevitable fate.

Serious kudos to the wait staff must be given during Rocky Horror. Tight tables and crazy hip thrusts can make for spills all over, and they maneuver perfectly during the mayhem.

The Rocky Horror Picture Show is a cinematic novelty that defined the genre of campy midnight movies, toast throwing and fandom. Decades before Harry Potter and the social media sparkle of the teen movie experience, there was Dr. Frank N. Furter and his troupe of Transylvanian freaks. The Boom brings it back to life in all its glory. To miss it is simply to miss the most fun night of your life.

The Rocky Horror Picture Show presented by The Boom is sold out for the remainder of the run this year. But do not fear, it will return next year and you must mark your calendars! Frank and his lab await. Don’t dream it, be it! 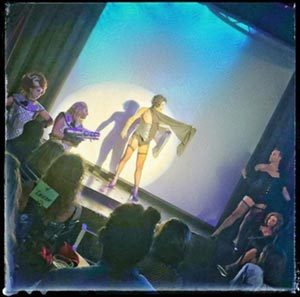 2 Responses to Rocky Horror is Back at The Boom and We’re So Glad!