Ridiculous Holiday Fun with The Boom’s Scrooge in Rouge 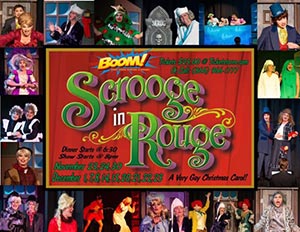 The absurdity that is Scrooge in Rouge. Photo courtesy The Boom.

Scrooge in Rouge is a raucous parody of the beloved Charles Dickens tale “A Christmas Carol”. All seriousness aside, no really, don’t expect a single moment of genuinely serious dialogue, it pokes fun of the most famous Christmas story ever told in the best way possible. Already a disaster before it’s begun, the cast enters the stage with bad news. Everyone in the show, the cast that would exist if it were actually “A Christmas Carol”, has gotten food poisoning. The remaining players promise to pull off the full story by playing all the characters amongst the three of them. It’s the perfect setup for two hours of ridiculousness, and off we go.

Cory King is Scrooge and she shares the stage with Paul Stafford and Kitty Bob Aimes, both of whom play multiple roles. The trio is a sight, entering and exiting with different costumes on in every scene, each one over the top and absurd. King executes her lines with hilarity and manages to hold onto the thinnest shred of dignity still left in the role. Possibly the only time you’ll ever see a female Scrooge, her miserly grimaces and grumpy disposition make her a true Ebenezer Scrooge. Stafford is Jacob Marley’s Ghost, or Ghottthhht as he lisps out in spooky incantations, the Ghost of Christmas Past, poor dumb nephew Fred, and even dumber employee Bob Cratchit, whose name they can’t seem to entirely recall. Stafford shares a cute grin and a wink with the audience, keeping them in on his little secrets.

Aimes is everyone else, including Mrs. Cratchit and the creepy Mr. Fezziwig, and she’s consistently a fourth wall breaker. A sassy flirt, Aimes throws her dress over unsuspecting audience members’ heads, forgets lines, and is generally incapable of staying on task. She’s disastrous and riotous. At one point, Aimes calls out the critics in the audience and directs a wave at the OK Art Scene and Hurd reviewers in the crowd. The nod is funny and unexpected, but a previous conversation would’ve been better. Hey Kitty Bob, call us! We’d really like to continue reviewing your shows. Reviewers much prefer a formal setup so everyone knows we’re coming, and some prior acknowledgement would’ve been ideal.

There exists a rare moment with Scrooge in Rouge that is not often found in theatre. This show is nearly impossible to review. Everyone knows their lines, probably, and the performances are hilarious. But where there are any mistakes or missteps, nobody can tell. And nobody cares. It’s pure fun, at times exasperating, and the actors laugh as much as the audience. Wig mishaps, missed cues, and all out character breaking might be on purpose, but might not be. The real ruse of Rouge is not giving away what’s an accident and what’s scripted, and in the end everyone leaves happy.

Scrooge in Rouge is everything you hope for in a night out on the town. It offers a break from the traditional, in every sense of the word, and the talent is there, in abundance, to provide a high quality caliber of entertainment. It feels very much like a game of dress up that’s taken a turn into the ludicrous. They might need a director, or maybe they have one, who knows. It’s a great time, and that’s nothing to Scrooge about.

Aimes, King and Stafford are accompanied and kept on beat by the lovely musical stylings of pianist Michael Stafford. The wait staff and bar staff of The Boom are excellent talents in their own right and deserve highest honors.

Scrooge in Rouge at The Boom runs aptly until December 23rd. Tickets are available at ticketstorm.com.