Jewel Box Theatre is presenting Patrick Hamilton’s “Gaslight” under the expert direction of Richard Lemin and a cast of five talented performers.  “Gaslight” is a play of suspense and intrigue with complicated characters and is often known as “Angel Street”  in USA theatrical circles. “Gaslight” is best known as the 1944 American film starring Ingrid Bergman, Joseph Cotton and Charles Boyer and earning an Oscar nomination for Angela Lansbury in her first film role.

The play is set on Angel Street in London of the 1880’s with typical mid-Victorian attitudes.  A couple have recently moved into a home that was once the scene of a horrific murder.  Jack Manningham brings his young wife, Bella to London hoping that she will soon be able to cope better with her ‘nervous’ condition.  Jack behaves with that superficial kindness that is a favorite veneer to cruelty as he appears to encourage Bella.  He is also firm in his assistance that she be assertive when dealing with the servants. He rewards her rare displays of confidence with disdain disguised as constructive criticism.  This familiar pattern of abusive bullying and controlling manipulation has historically been familiar to many.

Bella has become quite insecure dependent upon her husband for everything.  Jack’s manipulation is subtle, but an underlying desperation seems to be present.  He leaves the home every evening and it is often during his absence that Bella has an episode.  The gaslights in use during the era seem to suddenly dim as if more lamps had been lit but she is informed it is only her imagination. She is not completely alone, there are two maids, one is Nancy, a flirtatious and pretty young thing who cannot completely disguise her contempt for her mistress.  The other is Elizabeth, a kindly middle-aged creature who sympathizes with Bella and is suspicious that the master is behind all the mysterious missing things Bella is blamed for hiding and forgetting. 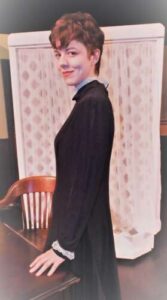 A police detective remembering the house and the previous crime that took place within the walls believes he recognizes Jack Manningham.  He comes to call upon Bella after her husband has left for the evening and he is able to show her that she is quite sane, and her husband has a nefarious purpose behind this behavior.  His name is Detective Rough. While the villain of this piece is clearly the evil master manipulator Jack Manningham, the hero is Detective Rough, and he also uses a bit of manipulation to achieve his ends.  But his ends are justice, and many of us understand a certain ability to manipulate can be a positive.  Because that is what is takes to get a middle-aged man to the doctor!

Katy Hayes stars as Bella Manningham imbuing her with the nervous characteristic of abuse victims.  While she displays complete defeat and degradation, one can see the strength within.  Jack Manningham is a successful villain able to isolate his victim.  Derek Kenney stars as the deceptively debonair gentleman, with sophistication and an evil glint in his eye.

Doug Monson is Detective Rough, dedicated to legal integrity and appalled by the position of the lovely lady of the house.  Detective Rough is truly a hero in the piece and Monson’s command of the role is excellent.  Over the years Monson has grown as an actor in each and every role and this one is no exception.

Julia Seely is Nancy, a maid but also a young lady with high aspirations; confident in her charms.  Seely gives us a competent worker who is quite capable of avoiding onerous duties but delighting in baiting her mistress when no one is looking.  Seely shows us a real minx!

Chris Harris is one of Oklahoma City’s most respected character actors.  She is Elizabeth, and her support of her mistress is likely the only lifeline Bella has until Detective Rough comes along.  Harris is always a joy to include in any cast.

With such a great cast to work with Lemin directs “Gaslight” with all the nuance that makes this play so interesting and timely.  The modern term ‘gaslighting’ has come into usage from this play and is exceedingly relevant in the modern era. 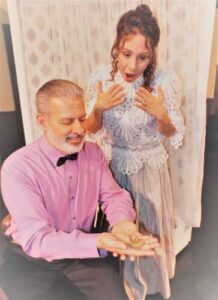 Technically the show is well-done in every aspect with an excellent crew at Lemin’s disposal.  David Patterson stage manages with Carol McDonald as assistant.  Shawn Hancock is set designer and construction is Cadence Cloud.  The lighting is courtesy of Isaiah Williams and Robbin Davis is responsible for costumes.  It all works smoothly, but one of the best aids from this cast comes from some relaxation of Covid 19 rules.  Yes, social distancing remains, yes, the audience is required to wear a mask, and all of this is very important to maintain until it is determined absolutely safe.  With the entire cast vaccinated and working together during rehearsal with the same familiarity as any family, the face shields have been retired while the cast is on stage performing.  It is much easier for audience members to lose themselves within the story without the constant reminder of the pandemic.  The actors should be commended for taking this step as we slowly return to some semblance of normalcy.  The distance between the stage and the audience is so vast that there is no possible contact between actor and audience. It is delightful to sit back, completely immersed in the highly suspenseful story that is “Gaslight”

The play is presented from April 29, 2021 to May 16, 2021.  The play has two intermissions, but the evening goes by quickly.  The new location is directly behind the former location at 36th and Walker in the building that housed the First Christian Church and Jewel Box Theatre for a lifetime.  This new location is accessed by following the drive edging the parking lot of the old building to the new location, at 321 NW 36th Street.  Jewel Box Theatre is an outreach ministry of Disciples First Christian Church located at the same address.  For information and tickets, contact Jewel Box Theatre at JewelBoxOKC.com or on Facebook: Facebook.com/JBTheatre.  The phone number is familiar, 405-521-1786. 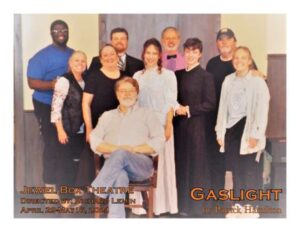