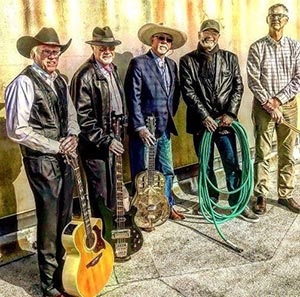 The Pollard Theatre in Guthrie is planning an exciting event! Billy Bob Bovine and the Embryo Transfer is a legendary local band and they’re bringing their tunes to the Pollard stage for one night only. Saturday, July 20th is the night, and all proceeds go towards the Pollard Theatre’s annual fundraiser. This concert event is a great opportunity to head out on the town, enjoy some great music, and support the arts. The Pollard Theatre has been bringing beautiful, inspiring theatre to Oklahoma audiences for over thirty years. Curtain goes up on season 33 on August 23rd with Driving Miss Daisy, starring the legendary artists Brenda Williams, Albert Bostick, and James Hughes. Following that is the hit musical Evil Dead, returning to the Pollard after a sold-out run in 2014. Evil Dead promises to be a blood-bath for all, with campy music and a front row splash zone! Up next in the lineup is the Pollard favorite It’s a Wonderful Life: A Live Radio Play. The radio voices on stage bring the classic Christmas movie to life.

After the Christmas season, and just in time for Valentine’s Day, is Love Letters, starting February 14th. Cozy up to your Valentine and see this delightful play that is itself a love letter to friendship and companionship. Closing out the season are two family friendly shows, You’re a Good Man, Charlie Brown and the off-Broadway smash PUFFS (Or, Seven Increasingly Eventful Years at a Certain School of Magic, and Magic). Wands up! Puffs is an Oklahoma premiere and it’s a must see for all wizardly wand-wielders and chocolate frog eaters alike. Touted as the play for “anyone who has never been destined to save the world”, Puffs promises to be a magical night of theatre, with a wink and a nod to Potter-heads everywhere. Season 33 is poised to bring some new favorites in the ever-increasing line up of excellent productions from The Pollard.

It all starts with the benefit concert, and The Bovine Band will bring the house down! Set to play rock ‘n roll, country and western, and even some jazz, Jay Hannah (aka Billy Bob) and his band can do it all. They’ve been performing in and around Guthrie for 36 years and have become a staple in the local music scene. The band also includes Jerry Ball, Brian Pierson, Charles “Skins” Bartrug, and Danny Hargis, entertainers all. They’re known locally as teachers, bankers, and even have a Veteran in their ranks, and they’ve played with the likes of Willie Nelson and Hank Thompson. Their music has been featured in movies, and they’ve played all over Oklahoma for the past 3 decades. The eclectic, energetic and exciting music of Billy Bob Bovine and the Embryo Transfer will be an unforgettable night at the gorgeous Pollard Theatre! With a mix of covers, an impressive compilation of original tunes, and the good-time stories of Billy Bob and the boys sprinkled throughout, this benefit concert will have you dancing in the aisles and laughing the night away. Come party with The Pollard as we appreciate all the ties that bind us; the magic of music and theatre, and a good time out on the town. The benefit concert celebrates and uplifts our wonderful arts community, whose heart is in historic Guthrie.

Billy Bob Bovine and the Embryo Transfer Band performs on July 20th at 8:00 p.m. at the Pollard Theatre, located at 120 W. Harrison in downtown Guthrie. A cash bar will be provided. The history of Oklahoma is all around you at the Pollard. Though ample parking is available right in front of the theatre, it’s recommended that you park far away so you can walk amongst the charming brick buildings on W. Harrison. Tickets for the concert are available at thepollard.org. Season 33 subscriptions are also available for all 6 upcoming productions. To purchase or renew, visit thepollard.org or call their box office at 405-282-2800.

Posted in Features, 2019, This Season | Tagged The Pollard
Search
Categories