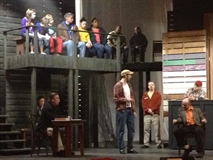 It is disturbing and also unfortunately real — striking a discordant chord within current societal attitudes. The action takes place in a fifth-grade classroom. Corryn Fell has an appointment with her son’s teacher, Miss Clark. Her son, Gidion, has been suspended from school for a number of days; the action which instigates the appointment. END_OF_DOCUMENT_TOKEN_TO_BE_REPLACED

The play centers on the return of the prodigal son Avery after a long absence touring Europe. He arrives with his lady love, Gillian, and he is hard-pressed to explain the vagaries of his dysfunctional family to her. In fact, he has a hard time understanding their eccentricities himself. The Suttons, bearing an old and established New England name, enjoy a significant fortune and an apparent carefree approach to life. As in all comedies, the humor is based on tragedy, and the tragedy is only endurable through escape and laughter. END_OF_DOCUMENT_TOKEN_TO_BE_REPLACED

“The Sound of Music” is an absolute perfect classic and one cannot help but expect to attend comparing the wonderful movie with Julie Andrews to any live performance. Jenny Rottmayer in the role of Maria Rainer is quite capable of enchanting the audience into forgetting to make that comparison from the very first scene. Her voice is crisp and pure and her interpretation of the young woman meant for motherhood, song and joy rather than reflection within the confines of a nunnery is genuine and convincing.

The music of Rodgers and Hammerstein tells the story from the book by Howard Lindsay & Russel Crouse suggested by the true story of “The Trapp Family Singers.” It is the story of a young postulant nearly ready to take her final vows at Nonnberg Abbey. She is sent as a governess to the home of Captain von Trapp, a strict widower with seven children to care for. END_OF_DOCUMENT_TOKEN_TO_BE_REPLACED

“Avenue Q,” which played recently at Oklahoma City Repertory Theatre, is a multiple award-winning show of Broadway puppet/human mashup fame. With Best Score, Best Book, and Best Musical under its belt, there is no question of the caliber Robert Lopez and Jeff Marx (Music and Lyrics) along with Jeff Whitty (Book) bring to the stage.

Much of the allure in “Avenue Q” came from the use of puppets alongside actors. While this might have taken a moment to get used to, the convention of puppets and humans coexisting quickly became accepted and added to the lovely intricacies of the show.

The story was about a young man grappling with real life as he faced the obstacles a recent college graduate confronts in today’s society. END_OF_DOCUMENT_TOKEN_TO_BE_REPLACED

When the dark side of the soul is revealed in classic drama it can be incredibly frightening.

In a modern comedy featuring average folks who, in extremis, expose the evil that lies within, the dark side can be frightfully amusing. The Pollard Theatre is currently showing “God of Carnage,” an example of this kind of humor, created by Yasmina Reza as only the French can.

Christopher Hampton’s translation retains the ambience, and “God of Carnage” becomes a universally appreciated light comedy. The production is unlikely to offend; however it should be noted that strong language occasionally erupts. END_OF_DOCUMENT_TOKEN_TO_BE_REPLACED

Fantastic fantasies are the bridge adults use to recapture the dreams of childhood lost. Lewis Carroll’s “Alice in Wonderland” is the book that showed us that our adult interpretations of childhood dreams and impressions are quite universal. The adaptation by Eva Le Gallienne and Florida Friebus translate Carroll’s wonderful book into a fine stage production. Director Shawna Linck has the daunting task of bringing the play to life for Poteet Theatre audiences.

The play is a difficult project to mount with a large cast of unique characters. Of course the first order of business is to find the perfect youngster to bring Alice to life. Anna Hall is exactly the right young lady for this part. A fifth grade student, Hall brings a great deal to the interpretation of Alice and only a bit more experience is needed to fine tune some of her recitation skills in important pieces such as ‘Jabberwocky’. END_OF_DOCUMENT_TOKEN_TO_BE_REPLACED

“Money Matters” the final Jewel Box Theatre production for the season gives the audience a sense of delightful farce and British style comedy. Carole Brendlinger submitted “Money Matters” to the Jewel Box Original Playwriting Competition in 2002 and earned a well-deserved first place for the script. Don Taylor directs this production which has been brought back by audience demand. Taylor does a marvelous job of directing; actors have the opportunity to deliver some truly great one-liners and the audience has the opportunity to appreciate those moments. The action takes place in 1894, the basic story concerns a young questionably principled gentleman who decides to rescue his family status by marrying money, but he is unable to open his heart to his enthusiastic bride due to his mis-understanding of propriety. END_OF_DOCUMENT_TOKEN_TO_BE_REPLACED

The Pollard Theatre continues Seasons of Laughter with “Dirty Rotten Scoundrels” a surprising musical. “Dirty Rotten Scoundrels” is a musical based on a successful movie about two con artists creatively bilking unsuspecting wealthy women of their assets. The screenplay by Dale Laudner, Stanley Shapiro and Paul Henning is full of wit and twists. The book by Jeffrey Lane should be a good read. However, the musical does not translate fully. Music and Lyrics by David Yazbeck create an average musical for a great cast. Unfortunately, good directing and solid casting do not counter the fact that reducing witty repartee and complicated set ups to a series of song and dance numbers eliminates much of the nuance and challenge created in the original movie.

END_OF_DOCUMENT_TOKEN_TO_BE_REPLACED

OKC Improv a Must!!

OKC Improv twists the audience into apoplectic seizures once again with their line-ups. “The Ones Your Mother Warned You About” are, as always, outstanding as they seize a zany idea delivered by some hapless member of the audience and create improvisational humor around the idea with brilliant one-liners made up on the spot. Cristela Carrizales, Buck Vrazel, Clint Vrazel and Raychel Winstead deliver a series of six different ‘couple’ dialogues that reveal a complete understanding of common misunderstandings. Humor is very revealing, reminding us of the universality of miscommunication, and misdirection. That is, if we can stop laughing long enough to catch our breath!

END_OF_DOCUMENT_TOKEN_TO_BE_REPLACED 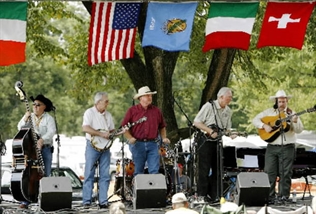 Back in the days of the Great Rebellion, many of us didn’t know much about bluegrass. Hearing the term made us think of Kentucky, but not Bill Monroe. Everything was about Rock & Roll. New and original, Rock & Roll is the music of a generation. Eventually we ran across The Flying Burrito Brothers and one of the best Rock & Roll experiences ever – “The Last of the Red Hot Burritos”. We discovered Byron Berline on the fiddle and we finally discovered bluegrass. We began to trace back Byron’s history in music and fell in love with bluegrass, and every album of every group Berline has been affiliated with. What a fiddle! END_OF_DOCUMENT_TOKEN_TO_BE_REPLACED