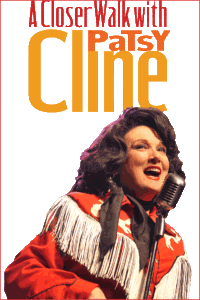 Patsy Cline, (Virginia Patterson Hensley) was born September 8, 1932 and in the short 30 years she had upon this earth she made an important mark, through a significant sound.  A sound that tears at your heart as Patsy sings of grief and mourning and a beautiful tone as she sings of hope and morning.  It’s quite a legacy to leave with her rich contralto voice occasionally moderating into a sweet soprano and a twang that made her a country singing star. The twang is not just country; it is the universal sound of… END_OF_DOCUMENT_TOKEN_TO_BE_REPLACED 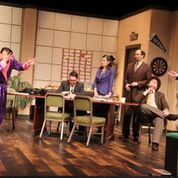 Neil Simon’s “Laughter on the 23rd Floor” was born in “Your Show of Shows” — 90 minutes of exceptional television history.  Some may remember sneaking out of bed to sit on the hard hall floor peeking around the door to watch the 9:00 o’clock extravaganza and falling in love with Imogene Coca.  While the love scene between Deborah Kerr and Burt Lancaster on the beach in From Here to Eternity is a favorite romantic movie classic it is still the face of Imogene Coca in… END_OF_DOCUMENT_TOKEN_TO_BE_REPLACED

“To Kill A Mockingbird” Reveals Little Gems and Big Baubles 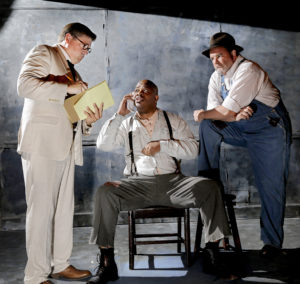 Jewel Box Theatre, an Oklahoma City tradition, kicks off the 2017-2018 season with “To Kill A Mockingbird” a powerful story by Harper Lee.  Harper Lee’s book came out in 1960 and earned the Pulitzer Prize in 1961. By 1970 the book was expertly adapted to the stage by Christopher Sergel.  A film, also a classic starring Gregory Peck, was adapted for the screen by Horton Foote. The movie garnered numerous Academy Award nominations with Peck winning… END_OF_DOCUMENT_TOKEN_TO_BE_REPLACED

“Laughter on the 23rd Floor” Laughter Backstage at the Pollard Theatre 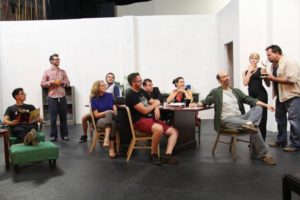 Cast of Pollard’s
“Laughter on the 23rd Floor”

“Laughter on the 23rd Floor” is a story based on what it was like working on “Your Show of Shows”, with Sid Caesar, Mel Brooks, Carl Reiner, and many others who became influential television/stage comedic writers/performers, while also portraying the reality of “show business”.  Now, personally, this cast has touched my heart.  August marks 20 years for me to be collaborating with artists such as Timothy Stewart (Max), and James Hughes (Val).  Both are current Company members, having collaborated 20+ years at… END_OF_DOCUMENT_TOKEN_TO_BE_REPLACED 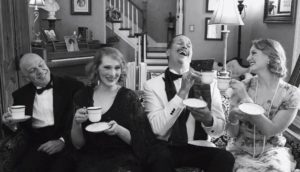 “Private Lives” is only one of the great Noel Coward’s masterpieces and it is full of vim and vigor.  The play from 1930 is sophisticated and elegant, a hallmark of that glorious period of witty repartee and snappy comebacks.  “Private Lives” reveals the essence of the period, when the world was transitioning from the excesses of the 1920’s to the stark survival mode brought about by the depression.  Audiences were enabled to escape privation and recall worry-free, free-wheeling times. The comedy was then, as it is now, a… END_OF_DOCUMENT_TOKEN_TO_BE_REPLACED 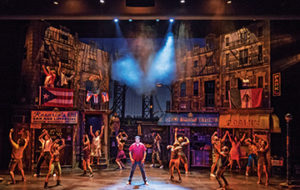 Cast of “In The Heights” Photo courtesy of Kirk Tuck

The music and lyrics of “In The Heights” fill the Thelma Gaylord Performing Arts Theatre at the Civic Center Music Hall.  Lin Manuel-Miranda is an extremely successful talent and “In The Heights” is only one of the many exciting shows he has developed.  Miranda originally wrote “In The Heights” in 1999 and began revising the script in 2002.  In 2004 Quiara Alegria Hudes joined the team and wrote the book for the award winning musical.  Premiering on Broadway in 2008, “In The Heights” earned four Tony… END_OF_DOCUMENT_TOKEN_TO_BE_REPLACED 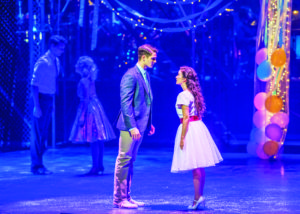 MaryJoanna Grisso as Maria and Austin Colby as they fall in love at the dance. Photo courtesy of KO Rinearson

Any time the lyrics of Stephen Sondheim and the music of Leonard Bernstein are together love happens and in “West Side Story” there is love, heartache, joy and song.  The book is by Arthur Laurents and the story is based on a concept by Jerome Robbins.  The idea isn’t exactly original; after all “West Side Story” is the American “Romeo and Juliet” from the 50’s and that is no secret!  Jerome Robbins originally directed and choreographed the… END_OF_DOCUMENT_TOKEN_TO_BE_REPLACED

“Or” A Masterful Production from Shakespeare in the Park on Paseo 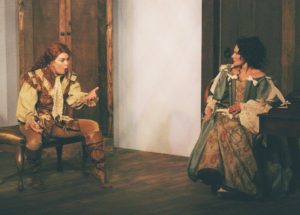 Liz Duffy Adams is a fascinating playwright, but playwright Aphra Behn has nearly been forgotten and Adams brings her to life in the comic story of a transformative night in Behn’s life.  Before becoming a playwright, Behn was a spy working for Charles II, a life she wished to leave behind.  She has a chance to have her play produced, almost a miracle in England in the 1660’s for a woman.  This is her opportunity to leave behind her… END_OF_DOCUMENT_TOKEN_TO_BE_REPLACED

The Stars Come Out- “When You Wish” on One A Galaxy Glows! 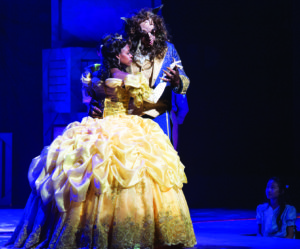 Ashley Arnold dancing with Mateja Govich from Beauty and the Beast as little girl, Serena Feng looks on. Costumes by Jeffrey Meek.

“When You Wish” is Lyric’s own, a production created from the imagination of director, Michael Baron featuring favorite songs and fantasies from Disney dreams.  The plot is loose, a young girl dreams her way through beloved songs with wonderful music, dancing and delight.  Baron and choreographer, Ashley Wells, highlight Disney’s most fantastic musical creations with incredible vocals and dance numbers perfectly aligned with Andrew Bryan’s musical direction.  Classic delights from Snow White, Cinderella and Mary… END_OF_DOCUMENT_TOKEN_TO_BE_REPLACED 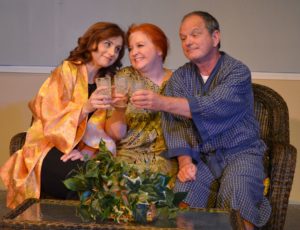 1) Sibling rivalry reaches comic heights in a scene from “Vanya and Sonia and Masha and Spike,” which plays at Carpenter Square Theatre June 23-July 15. Pictured from left to right are J. Christine Lanning, Terry Veal, and Laurie Blankenship.

Carpenter Square Theatre, in its 33rd season, presents “Vanya and Sonia and Masha and Spike,” written by Christopher Durang.  The Tony Award winning play is a modern American homage to the character of Chekhov and the dramedy of Russian life, much like American life but set in rural Bucks County.  Siblings Vanya and… END_OF_DOCUMENT_TOKEN_TO_BE_REPLACED