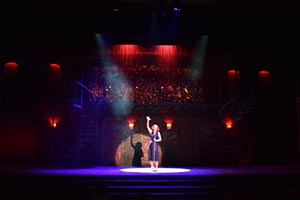 Cabaret opened on Broadway in 1966, but it remains shockingly relevant in 2019.  Based in Berlin in the early days of the Nazi party, Cabaret is alluring and tempting, dark and horrific, and it still speaks to cultural and political topics that we’re debating to this very day. Cabaret features two worlds: The drab boarding house where American writer Cliff Bradshaw spends his days working on his latest novel, and the exciting and seedy Kit Kat Klub, every bit the opposite, where he spends his nights.

Taylor Ratliff is the Master of Ceremonies (Emcee) at the Kit Kat Klub, and he invites us in with the opening number “Willkommen”. Welcome, indeed. Ratliff encourages the audience to “forget your troubles” as the women of The Kit Kat swarm around him in silken lingerie. Ratliff is playful with the audience, an emcee through and through. But when the spotlight goes out, he becomes something much more sinister. He slinks and stalks through nearly every scene of the show, silent and ever present as a reminder of something lurking just ahead, tantalizing and terrifying. In a way, he represents the truth that the growing political divide in 1930s Germany was planting the seeds of hatred that grew into the horror of World War II. Like that growing mindset, Ratliff is constantly in some dark corner, always lingering but never quite noticed. Ratliff in these moments is nearly frightening. He also represents the victims, fully embodying both conflicting representations: the Nazi regime and those targeted by it. This is a powerful, haunting performance by Ratliff, an incredible talent. He shines during “I Don’t Care Much”, bringing the house down with his vocal performance. 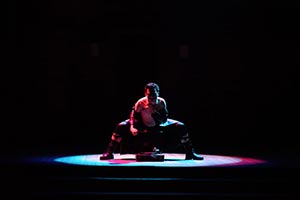 Joseph Campbell is Cliff Bradshaw, the American novelist who’s setting up shop at the boarding house. Campbell starts off reserved and proper, even a little stiff. He’s a no-nonsense American in the compelling world of Berlin. He has secrets, however, and he’s perhaps the most socially conscious and self-aware of any of the characters. Campbell has difficult choices to make, and he makes them well. His chemistry with Kirsten Myers as Sally Bowles is at times palpable, other times cold and standoffish. This is an important dynamic that conveys his mixed feelings for her. They love and understand each other more than anyone else can.

Myers is glorious as the infamous Sally Bowles. Sally is the Kit Kat Klub’s main event, a nightclub singer from England who’s the life of the party everywhere she goes. Myers possesses an emotional range equal only to her vocal range. She’s nearly manic as Sally, constantly trying to keep the party going, living in denial and doubt of the realities surrounding her. The breakdown she experiences is so subtle, when she pulls the rug out from the audience, it’s a visceral gut-punch. She’s sexy and flirty when she’s performing in the nightclub, a charm she can’t turn off in regular life. Myers makes it clear; this isn’t just Sally’s performance style. It’s survival.

Myers performing “Maybe This Time” is heartbreaking, while the power she belts out during “Cabaret” is breathtaking. She’s undeniably strong, hurling herself into her portrayal of this iconic character. Yet, there’s a minor detail that simply must be mentioned. Myers creates a tonic for herself in front of Cliff, a so-called “hangover cure” called a Prairie Oyster that’s just a raw egg with Worcestershire sauce. Myers actually cracks an egg into a mug, shakes a few dashes of unhelpful Worcestershire sauce into it, and downs it onstage with a smile on her face, exclaiming, “Mmm! Delicious!” and not flinching for a second. Talk about a trooper.

Tessa Giordano is stern and sharp as Fraulein Schneider, the owner of the boarding house. She has a resigned disposition, just getting by as best she can. Her unlikely romance with Garrett Morris as the Jewish fruit vendor Herr Schultz proves to be the catalyst on which the tides turn. Loyalties are tested, and Fraulein Schneider must choose between career and love. Giordano remains diligent, while Morris stays hopeful. The sad truth is, they’re both on the wrong side of history. Their love and loss is proof that there are no winners in War.

Kate Kemmet is smart and intuitive as Fraulein Kost. A tennent of Fraulein Schneider’s, she plays hostess to a litany of sailors, much to Fraulein Schneider’s dismay. The two spar heartily, and Kemmet holds her own. Kemmet carries the scene during an engagement party, and singlehandedly turns the play from teetering on the edge of that impending darkness to jumping into the deep end.

Tanner Berry is Ernst Ludwig, a pupil of Cliff’s who shows his true colors. Keith Gruber is Bobby, someone who Cliff thought would stay in the past. And Gonzalo Aburto de la Fuente is Kit Kat Klub owner Max, Sally’s on-again off-again boyfriend. Berry is chilling in his portrayal of a burgeoning Nazi leader. Gruber has depth and bravery as Bobby, and he holds secrets too. Aburto de la Fuente is menacing as Max. He could be considered a “bad guy”, but even he pales in comparison to the evil that waits ahead. 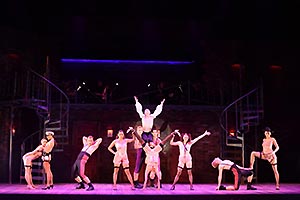 The boys of the Kit Kat Klub are sultry and more than merely decorative. They dance beautifully, with agonizing emotion. They are Aburto de la Fuenta as Hermann, Brick Ban as Victor, and Aidan DeWitt as Hans. Likewise, the girls of the Klub dance on the Kit Kat stage with smiles that don’t reach their eyes. They slip into trances, staring blankly while they perform with perfection. They hold onto that empty look, stirring up the most painful emotions. They’re Anna McGuire as Helga, Mia Munn as Fritzie, Evie Lawson as Texas, Hannah McEvilly as Rosie, Natalie Rae Goodin as Lulu, and Bianca Bulgarelli as Frenchie. Rounding out the cast is Cameron Saims as Rudy/Officer and Evan Lennon in a striking number with the Emcee, as a character titled simply “Chimpanzee”.

The period costumes and makeup design by Benjamin Burton are superb and spot-on. Scenic Design by Cliona Smith and lighting design by Renée Brode create a warm, glowing night club and a homely, humble boarding house. Photography is by Richard Sprecker and this production is as always excellently directed and choreographed by Lyn Cramer.

As the Emcee closes the show, he asks us, “Where are your troubles now?” and that’s the most disturbing moment yet. Why does this show still feel so relevant? It’s from the 60s, and it’s about the 30s, but it speaks loudly to today. It begs the question: how long will we continue to deny what’s unfolding around us as a society, just for one more night believing that life is indeed a cabaret, old chum. Well done to the cast and crew of Cabaret. As the audience exits out into the October evening, one thing is certain: we’re leaving it, but this show won’t be leaving us any time soon.

OU University Theatre and Weitzenhoffer School of Musical Theatre’s Cabaret runs until October 13th at the Elsie Brackett Theatre, 563 Elm Ave in Norman on OU’s campus. For tickets visit theatre.ou.edu or call the box office at 405-325-4101.