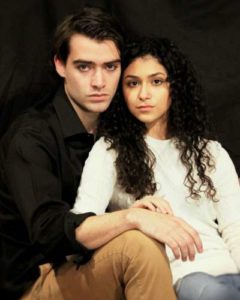 Opening the 2020 season, Executive and Artistic Director, Kathryn McGill, and Tyler Woods, Managing Director of Oklahoma Shakespeare in the Park welcome Kris Kuss to direct Shakespeare’s classic “Romeo and Juliet.”  Kuss has extensive experience with Shakespeare including combat instruction. As Fight Choreographer his staging of each altercation lends verisimilitude as well as elegance along with his generally excellent direction of this classic tragedy.

“Romeo and Juliet” is one of the most familiar of Shakespeare’s beloved plays to all audiences.  The conflict of elders destroying the simple love of innocent youth is classic and heart-wrenching, but the depth of impression is often lost over the years.  Revisiting the play brings the story back in focus again, but more importantly awards the viewer a greater understanding and a broader application of the story in life.  It’s perhaps the experiences of the mature, or just the difference in perspective, but this story of two young lovers caught up in circumstances beyond their control is even more profound.

The Prince of Verona is dismayed at the feud between the Capulets and Montagues that erupts into fisticuffs in the streets.  Nevertheless the altercations continue and tempers flare.  Romeo Montague and Juliet Capulet meet and fall in love instantaneously.  They agree to marry with the help of Friar Laurence.  The fighting progresses and friends of each family cannot restrain their emotions resulting in unavoidable confrontations.  Romeo defends himself, and unfortunately, is responsible for the death of Juliet’s cousin, Tybalt.  In the end nobody wins, young lovers must die, and ultimately the Capulets and Montagues pay a great price for their intractability. 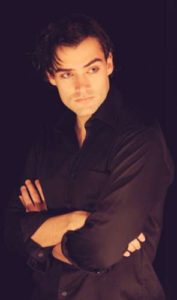 Bryan Lewis as Romeo in OSP’s Shakespeare in the Park. Photo Courtesy of OSP

The role of Romeo is played beautifully by Bryan Lewis.  Lewis is handsome and talented and he has the expressive eyebrows that are so necessary for success on stage and in film.  Juliet is played by Nikki Mar, a lovely girl with a delightfully expressive countenance that conveys a considerable depth of feeling.  The actions of these two star-crossed lovers are rather unwise but we often forget how young these characters are.  Lewis and Mar have that quality of youth and innocence that makes Romeo and Juliet seem quite reasonable given their ages.  Yet Lewis and Mar both have the benefit of acting experience and talent that allows their performance to be wonderful.

Prince Escalus, the Prince of Verona, is portrayed by Heath Jones Jr. with nobility and perception.  From the beginning Jones reveals in Escalus a commanding presence that suggests a controlled leniency in the activities of the populace.  Escalus functions as the narrator and Jones defines the separate moments with dignity and verve.

The parents are played by Michael Page, Mariah Warren and Josiah Brooks.  Page and Warren are Lord and Lady Capulet with charm, wit and particularly effective self-absorbed desires.  Brooks is Lord Montague, the very proud father of Romeo who doesn’t seem to listen either.  All the parents recognize their children are too young to decide about marriage, but neither family recognizes that may mean they are also too young to marry.  Besides, it is clear they follow the custom of the day: marry for familiar prestige and wealth. So that is what Juliet and Romeo must do. 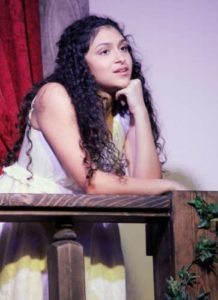 Renee Krapff is Nurse.  She is a nurse of intelligence and great wit.  She is loving and brave as well as loyal and true.  Most of all she is exceedingly funny.  Shakespeare was a genius with comic relief and that provided by Krapff is more than relief it is a welcome respite delivered by an extremely accomplished and talented actress.

Hal Kohlman is Friar Laurence.  Kohlman plays the Friar with expansiveness in understanding that is a pleasure to watch.  Kohlman is an accomplished actor of note and an excellent mentor, actor and director at Oklahoma City University where he produces quality Stage Two productions.  He is the perfect Friar Laurence.

The role of Mercutio is played superbly by Allie Alexander.  She is extremely talented and versatile but unfortunately Mercutio is somewhat overplayed in some areas.  Mercutio is a friend to Romeo Montague and kinsman to the Capulets, theoretically welcome in both households. However such a common and brutishly oversexed Lothario would likely be unwelcome in either home.  Nevertheless Alexander handles the masculinity very well. The frequent displays of heavy-handed aggression and raunchy wanking is offensive to some especially as it provides an unnecessary distraction from the story.  Once is enough, even for a man. 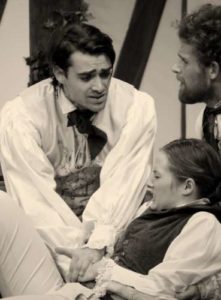 Kevin Cook is Benvolio, nephew to Lord Montague and friend of Romeo.  Cook handles the role with responsibility as well as qualified responsiveness and courage.  Tybalt, a nephew to Lady Capulet, is played by Marcus Popoff.  Popoff gives Tybalt that sensation of impulsive recklessness that ultimately leads to disaster.

Paris is the young nobleman and kinsman of Prince Escalus.  He is the desired husband for Juliet, a very suitable match for the Capulet family and supported by the Prince.  He is also genuinely in love with Juliet.  Paxton Kliewer takes on the role of Paris with great sensitivity.  In this story it is impossible not to be sympathetic to Romeo, but with Kliewer in the role of Paris, it is clear he will make Juliet a doting and kind husband.  This makes “Romeo and Juliet” even more interesting to watch.

Aaron Bates and Madison Carey are the Understudy Cast.  Having rehearsed and developed excellent characters in every male and female role is a tall order and they should be applauded for their work.

“Romeo and Juliet” has an excellent, production team to back up the thoughtful direction of Kris Kuss.  Lloyd Cracknell creates accurate and lovely costumes under Rebekah Garrett’s comfortable lights.  Mariah Warren turns her maternalism as Lady Capulet to further heights as Dance Choreographer.  Caprice Sorg, Dramaturg and her assistant Heath Kuykendall provide indispensable assistance to Kuss.  Emily Bond, Assistant Director, is also invaluable as is Tyler Woods as Company Stage Manager.  Not everyone can be mentioned, but everyone should be congratulated on the smooth flow of this fine production. 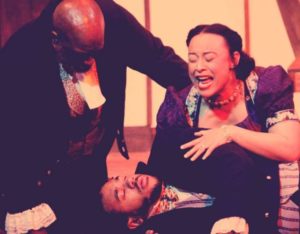 “Romeo and Juliet” plays at Oklahoma Shakespeare in the Park or in the Paseo district February 13 through March 1, 2020.  Curtain is 8:00 pm with a Sunday matinee at 2:00 pm.  For tickets and information visit www.okshakes.org or call the box office 405-235-3700.  The theatre is located indoors at 2920 Paseo in the exciting and quaint Paseo district of Oklahoma City.  ‘Prepare thee for a lark’ a very romantic one with this grand production of “Romeo and Juliet” from this exciting theatre company.