“Noises Off” A Must See Production from Theatre Oklahoma City University 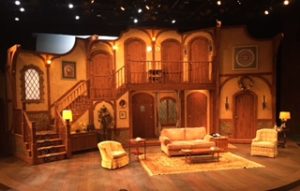 It’s hard to go wrong with Michael Frayn.  His success as an author is significant and is equaled by his prowess as a playwright.  One of the funniest plays of the 20th century is “Noises Off” written in 1982.  He was inspired in 1970 while watching one of his very funny farces from the wings.  Written for Lynn Redgrave “The Two of Us” was even funnier from backstage and he decided then that he must write a play ‘from behind’ and “Noises Off” was conceived.  The final play, “Noises Off” was born and the slapstick physical humor, the witticisms and asides are hysterical.  The play requires one thing—perfect timing and with that the show is sure to be a winner.  When the actors also have skill, intelligence and the ability to take advantage of each brilliant moment, then the show is not only a winner, it becomes a major hit.  Oklahoma City University has such a hit with their production of “Noises Off” playing at the Burg Theatre through December 10, 2017.

As a play within a play “Noises Off” tells the story of a group of actors in their final rehearsal for a play called ‘Nothing On’ which opens the following day.  They are not quite ready to go on and there are interruptions allowing the audience to get to know the actors as well as their characters.  The first Act takes place in January.  The location is the living room of the Brent country home.  The second Act takes place in February and is seen from the backstage perspective.  The third Act is in April and the ‘Nothing On’ set is from the front again.

‘Nothing On’ stars Dotty Otley, a grande dame of the theatre as Mrs. Clackett, the Brent’s maid.  In the absence of Mr. and Mrs. Brent, one of the house agents brings a lady friend.  Garry Lejeune plays Roger Tramplemain and the sweet young thing is Brooke Ashton playing Vicki.  The homeowners unexpectedly return.  Frederick Fellowes is the actor who portrays Philip Brent and Belinda Blair portrays Flavia Brent. Another unexpected visitor is a burglar, played by veteran actor Selsdon Mowbray. The director is Lloyd Dallas. Stage Manager is Tim Allgood and the assistant is Poppy Norton-Taylor.

“Noises Off” is directed by Dan Fishbach and he brings to OCU Theatre Department a wealth of experience from Los Angeles.  One of the advantages he has at OCU is the expertise of Jason Foreman, Scenic Designer.  The set is beautiful and brilliant with a great attention to the detail that enables a complicated story line with numerous props to be clear and simple to follow.  LukE Hadsall is a technical director who also keeps things easy, and Natalie Jacobson designs the costumes.  Kristen Cerelli is an indispensable coaching dialect and Luke Thomas Eddy directs the fights, realistically and amusingly.  Sound Designer Nathan Schilz also is responsible for the original music, a nice touch.  Chase Stryhal designs and keeps track of those numerous and unusual props. Zach Polasek designs the lights and MacKenzie Blair is Stage Manager, a long-suffering job as Tim Allgood and Poppy Norton-Taylor can attest to!

Fishbach has another asset at Oklahoma City University.  A theatre department filled with talented young folk who are able to take on characters with age as well as with beauty.  Reilly Preston is superb as Dotty Otley, a true trouper, and her transition to Mrs. Clackett, the maid is perfectly delightful.  Blake Sauceda is Garry Lejeune, sensitive lover, who plays Roger Tramplemain, seducer of young women and his performance and expressions are brilliant.  Mia McGlinn is the lovely and vacant Brooke Ashton, who is a natural at being the sweet young thing, Vicki.  Preston Chapman is the director Lloyd Dallas who attempts with only limited success to guide these actors in their roles.  It must be interesting to watch the interplay of director Fishbach as he leads Chapman into his role as a director with his mind on two too many things.  Chapman’s character is indicative of his success as an actor, and Fishbach’s success as a director!

The Brent household is disrupted when the travelers return from Spain without notice.  Blayne Childers is wonderfully dim as Frederick Fellowes (by his own admission) yet conveys a certain degree of common sense in his character of Philip Brent.  Patricia Irwin is a delightful busybody as Belinda Blair the experienced actress playing Flavia Brent.  Matthew Tuley has the role of Selsdon Mowbray, once an actor of note, but who now finds more applause in his reminisces with a lovely bottle of scotch.  Jonathan May is Tim Allgood, the dedicated stage manager, set builder, gopher and understudy to all male roles.  His ability to fix everything is certainly stretched, and May shows his building frustration with finesse.  Samantha Smith is the delightful actress who has the role of the assistant stage manager, general understudy for all female roles and apparently responsible for all organizational duties.  She fails beautifully, and her performance adds a lovely touch to the “Noises Off” but with ‘Nothing On’ not so much.

In fact “Noises Off” is an example of absolutely and completely organized chaos, and is hysterical at every turn.  This young cast has what it takes, and the most important thing they have is perfect timing.  It shows in “Noises Off” and it will show as they continue in theatrical careers.

“Noises Off” is an Oklahoma City University Production ending the run on December 10, 2017.  Curtain is at 8:00 pm Saturday night, and there are a few tickets available.  The Burg Theatre is located at 2501 N. Blackwelder, between Classen and Pennsylvania on the OKCU campus. Contact the OCU Theatre Box Office 405-208-5227 for the performance tonight.  This show certainly warrants the phrase ‘must see production.’