No Trouble: “The Music Man in Concert” is a Jewel-and that Rhymes with Pool! 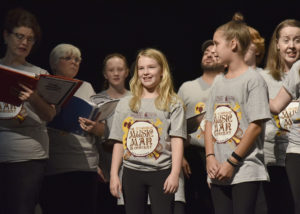 Tonight a musical extravaganza opens with the collaboration of Oklahoma City Repertory Theatre and Oklahoma City Community College presenting “The Music Man in Concert” honoring 60 years of joy from the original musical by Meredith Willson. Joining CityRep and OCCC are a number of partners such as the Ambassadors’ Concert Choir, Classen School of Advanced Studies, and Junior and Teen Race Dance Company.  The University of Central Oklahoma (UCO), The University of Oklahoma (OU) and Painted Sky Opera, Dance Unlimited/Spotlight Acting Academy and Oklahoma Educational Television Authority are only some of the contributors to this Public Works project.  Public Works is the opportunity for a theatre company to involve several other entities in a theatrical project to produce a piece that allows performers of many levels to work together.

The concert adaptation is by Evan Haile. “The Music Man in Concert” presents the show without some of the ‘frills’ in a full scale production.  The advantage is more community involvement in a friendly environment.  The stars of the show shine brightly with Jonathan Beck Reed as Harold Hill, con artist/musician, and Teri Bibb, Marian, librarian, lead a cast of equity performers alongside amateur and even novice performers.  Reed and Bibb are absolutely astounding, as are the supporting cast of Barbara Fox DeMaio, Ben Hall, Justin Larmon, Marcellus Hankins, Molly Cason Johnson and Bill Perry.  Nevertheless, it is hard to decide whether the children or the ‘Pick-a-Little’ Ladies steal the show!

One advantage of a concert format as opposed to a full-scale production is the ability to utilize a large number of cast members and they cannot all be mentioned.  But the children are, in the end as well as the beginning, the biggest advantage.  Leading the children’s cast are EmmaLynn (Ember) Reed as Amaryllis and Anthony Neumann as Winthrop. These two youngsters are both exceptionally talented.  They exhibit an understanding of the stage as well as personal stage presence.  Camden Bailey adds her great personality to the ensemble along with Bella Bosin who comes from the seventh grade classes of the Classen School of Advanced Studies.  Another young man with a great deal of talent is Eli Fortney, who is establishing a presence in the theatrical community and is also a seventh grader!  Colten Jose Hernandez has a flair that assures he will continue to perform beyond his current age (11) in many productions to come.  Christian de Coune is another artist whose debut at CityRep in “The Music Man in Concert” is excellent.

Madison Parrish is not only a vital member of the ensemble, she is the understudy for Amaryllis and her talent is evident. Krayson Rayce Reed is thrilled to be working alongside his equally talented sister, Ember Reed, and their Dad, Jonathan Beck Reed.  This is certainly a talented family, and Krayson has a great future. Lexy Sweet is an independent seventh grader with a talent as tasty as her name.  This list does not include all of the talented teens, and there may be others that have been missed, as it certainly seems that River City is chock full of talented young people, and the teenagers and children from Oklahoma City are clearly a talented crew.  “The Music Man in Concert” is a wonderful opportunity for them to work with professional equity actors and each and every one of them has risen to the challenge with infinite grace and voice.

Some of the advantages of the concert approach are also disadvantages.  The lack of intricate sets and period costumes allows performer’s greater freedom to concentrate on the music, certainly advantageous.  The disadvantage is sets and costumes are often a beautiful way to create the mood as well as the period.  In this production the beautifully painted backdrops are all that is needed for the setting and the ladies hats are perfect.  One expects that actors will wear their ‘blacks’ standard attire for performers, black slacks or skirts paired with either a white or black shirt or blouse can easily create a period look especially with the addition of the lovely hats. Lloyd Cracknell, Costume Designer, displayed his brilliance from the waist down of all the performers; however everyone (except the leads) wore a 21st Century quality T-shirt promoting the show with the “The Music Man in Concert” logo boldly displayed.  The effect is a little jarring, but give it a minute, the performance triumphs and soon it is seen that everyone moves like the early 20th century period as they should.   The feet dance timelessly and from the mouths of each is song that lures and sooths remarkably.

Teri Bibb looks exactly like the romantic lady of the early 20th century, gaining self-assurance and wisdom.  Her melodious voice conveys emotion and quality as well as strength.  Jonathan Beck Reed is always a treat, his command of the stage is complete and certain and on occasions such as this, when he can be a bit of a rogue, he is sublime.

Cast Photo with approximately half the cast!!!! The Music Man in Concert!!! Photo courtesy of Wendy Mutz Photography

This comes about because of the hard work of Donald Jordan, Artistic Director of CityRep, a visionary of profound strength.  After the vision, comes the work and the hard work of Director, Harry Parker pays off beautifully in “The Music Man in Concert” as he weaves over 120 performers in and out masterfully guiding with clarity.  Abbie Ruff is Assistant Director invaluable to the production and beloved as a Dance Captain for the children.  Working alongside Daniel Leeman Smith, Youth Director, the two of them corralled the kids so that they were unaware they were being corralled!  Hui Cha Poos is a master choreographer, dancers seem to leap a little higher, hang in the air a little longer and come back to earth softly and effortlessly.  “The Music Man in Concert” is not only a musical of great acclaim, it is a musical based on music, a band, and Sandra Thompson is a superior Music Director as well as conductor!  Her vital contribution to every aspect of this show is flawless.

There is one more evening show at the Performing Art Center at OCCC, and then the Sunday matinee, and then the train will leave River City, but most of the actors will still be in Oklahoma City.  Curtain is 7:30 on Friday evening and 1:30 on Sunday afternoon.  Visit www.cityrep.com for tickets or call 405-848-3761.  This is a show for the family, one that places over 120 people on the stage at one time is astounding, and that’s no trouble—that’s a miracle right here in Oklahoma City!