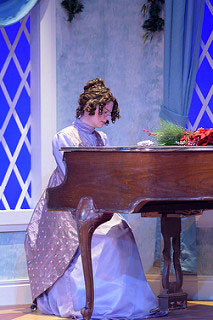 Jane Austen is one of the most popular novelists of her period, writing about the social constructs of the late 18th century.  ‘Sense and Sensibility’ and ‘Pride and Prejudice’ are favorites and have also been adapted into popular plays.  Continuing that delightful aura is Lauren Gunderson with “Miss Bennet: Christmas at Pemberley.”  This play is a sequel to ‘Pride and Prejudice’ two years after the novel ends.  Elizabeth and her love, Mr. Fitzwilliam Darcy as well as sister Jane, and her amour, Charles Bingley have gathered at Pemberley, the Darcy’s’ opulent estate.  Expected are the Bennet parents and two more of the Bennet sisters, Lydia and Mary.  Gunderson deals with Mary, the middle sister, still unmarried and bookish.

As they gather before Christmas, unexpected guests show up, one of them a young lord, uncertain about his status and future, preferring his studies to the social demands of his new title.  Arthur de Bourgh is the perfect gentleman for a young woman whose beauty pales in comparison to her sisters, until one discovers her mind.  Once her face lights up she is, possibly, the most beautiful of the Bennet girls.  Once Lord de Bourgh discovers her mind, his interest is palpable, but his shy demeanor is very much an obstacle.

Gunderson is a respected young playwright and she certainly does justice to Austen’s characters with her sequel.  “Miss Bennet: Christmas at Pemberley” is directed by Matthew Sipress, noted for his fine choreography and direction.  He does a masterful job of directing this young cast, doing justice to both author and playwright. 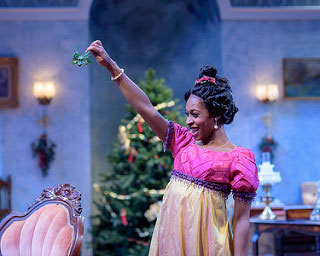 The show is beautifully cast with students able to create complicated characters easily and naturally.  Miss Bennet’s future is resolved before the arrival of her parents and youngest sister for the Christmas festivities so we only meet four of the Bennet sisters.  However, they are joined by the rather bluntly unscrupulous Miss Anne de Bourgh, who fancies herself engaged to the young Lord de Bourgh, her distant cousin.  These five young ladies have developed ideal characterizations under the guidance of Sipress and shall forever be remembered by many Austen fans as the faces seen when imagining Austen’s complex female characters.

Elizabeth Darcy is beautifully played by Alison Sloan.  She is very natural in the role.  Fitzwilliam Darcy is perfectly portrayed by Walter Northcutt.  These two make a truly lovely couple and the audience is immediately happy that things have turned out so well for beloved ‘Pride and Prejudice’ characters.  Jane Bingley is a lovely expectant mother captured realistically by Maddie Reese.  Her husband, Charles Bingley is an ideal complement found in Jeffery Laughrun.  The very giddy younger sister, Lydia Wickham, is excellently revealed by Ashley Arnold, her flightiness is hard to contain, and Arnold does a nice job of presenting Lydia amusingly contrasting to her more lady-like sisters.  The central sister in this story is the family librarian, Mary, whose spinsterhood is assured by family members.  She is wonderfully represented by Callie Dewees, an up and coming actress of note.  Dewees expertly masters the difficult challenge of the wallflower blossoming into her own beauty coming as a welcome surprise to her family and herself.

Arthur de Bourgh, is the perfect match and counterpart to Mary; bookish and naively shy, he recognizes the qualities of Mary Bennet but is unable to do anything about it.  De Bourgh is delightfully and nervously created by Brayson Williams.  Anne de Bourgh, also arrives at Pemberley, to inform her cousin that they are engaged.  Anne de Bourgh is played by accomplished actress Kaiden Lynn Maines with an uncertain and insecure core covered by determined harridan harshness.

There are two ‘swings’ in “Miss Bennet: Christmas at Pemberley” and they have the taxing job of understudying everyone, not just one single character, these two must learn multiple roles and characters line and movement and character perfectly.  The female swing is Gabrielle Browdy and the male swing is Dustin Dale Barlow.  Although unseen their contribution is considerable, and their dedication is inspirational.

This student cast has done a superb job and is a credit to the Oklahoma City University Theatre department.  Criticism is somewhat finicky, as the performances are nearly perfect.  The beautiful set is the contribution of the highly talented Carleigh Wagner and the lovely costumes are due to the equally talented Celia Kasberg.  Overall the show is technically smooth, a delight to eyes and ears.

“Miss Bennet: Christmas at Pemberley” can be seen this weekend only, with the final evening performance Saturday, December 8, 2018.  That is tonight, so make your reservations right away and bundle up for the 8:00 curtain.  The final performance is Sunday, December 9, 2018, and that is a 2:00 pm matinee for those who do not wish to brave the cold Oklahoma evening winter winds. Performances are held in the Burg Theatre on the Oklahoma City University campus at 2501 N. Blackwelder.  For tickets and information visit www.okcu.edu/tickets or call the box office at 405-208-5227. “Miss Bennet: Christmas at Pemberley” is fascinating and refined, a witty and wise evening of entertainment.