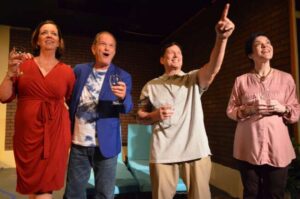 The final production of this ensemble play is written by a “wild and crazy guy,” Steve Martin. Martin is a television/film actor as well as a writer and Meteor Shower is about a true scientific event . I mention this mixed media performance because the story told by this energetic cast of 4 seemed like a tv show and at times a comedy play.

The story starts out with a nervous Corky, played with vigor by Mikio Gillmore. She is getting the last little detail ready to greet some potential new friends which could also lead to meeting more influential folk in their social strata. Her hubby, Ed Spinelli in the role of Norm, feels confident that all will go well tonight with their houseguests. Terry Veal is the cool guy who’s married to Lilli Bassett, the couple who our host two want to be in their arclight.

The meteors are based on a real life once in a lifetime event as are the reactions to two marriages that aren’t reigning down in the bedroom. The problem with material of this kind is that the players require more experience to be able to hit the cues at the appropriate time. In other words, there were many missed moments in the book which would have played out better for either the big or the little screen. This is the final set of performances of this dark comedy before it opens at its new venue and it deserves to have full houses at each of the remaining shows. Enjoy the “will she break the wedding vows, or won’t he?”.

Meteor Shower plays weekends through July 31, 2021. Call 405-232-6500 for reservations.  Carpenter Square is located at 800 West Main although they will soon be moving to their Reno location for the next season.