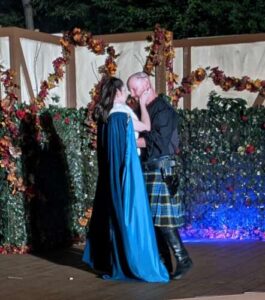 “Macbeth” often referred to as The Scottish Play by the superstitious, never fails to intrigue an audience and Oklahoma Shakespeare in the Park’s presentation is certainly no exception.  Oklahoma Shakespeare in the Park (OSP) is located in the fabulous and historical Paseo district and during the lull caused by the pandemic engaged in extensive remodeling. They created an amphitheater enabling outdoor performances at this location while still heeding equity rules.  The amphitheater, known as Shakespeare Gardens, is brand-new and  quite wonderful; however, October can be a little too cold for an outdoor performance.

Tyler Woods directs and his mastery of Shakespeare is evident in the production as he explores the nuances as well as the obvious motivations.  The play stars Michael Stewart Allen in the title role and Allen’s Macbeth displays the fascinating conflicts of the character with striking boldness.  Madelyn Sproat as Lady MacBeth has developed a characterization that reveals the undeniable power and intelligence of Shakespeare’s women.  The two of them risk everything and do so apparently with complete understanding of the possible consequences.  The shocking realization that they do not always know all the potential outcomes of their actions makes this production very interesting.

This cast contains a multitude of Michaels—along side Allen there is Michael LaGue as Duncan and Michael Paul Moreillon as Macduff.  These Michael’s have more in common than their Christian names, they have a deep understanding of their roles.  Nevertheless, LaGue’s Duncan seems slightly artificial at times although he shines in his other roles.  Moreillon’s Macduff is strong and his suspicions seem quite realistic. 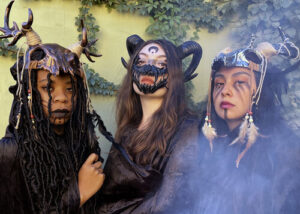 Lauren Harrison, Maya Ferrer and Andie Fuentes haunting as the three witches of “Macbeth” Photo courtesy of Oklahoma Shakespeare in the Park

Nicholas Hone is an excellent Malcolm, and Paxton Kliewer is also superb as Banquo and Seyton.  But of course, the most important characters in this story outside of Macbeth himself are the three wise women, witches of prescience.  Their predictions confound Macbeth, but they are logical predictions based on the inescapable results of flaunting conventional morality. Andie Fuentes, Maya Ferrer and Lauren Harrison portray these three hags with foreboding and just a touch of tongue in cheek humor indicating their delight in taunting Macbeth.  It is no wonder that Macbeth considers himself their victim rather than the victim of his own greed and brashness.  Although the three seem slightly rushed at times the overall delivery is ominous and portentous.

One of the nicest aspects of Shakespeare is the extraordinary depth and unique flavor of the minor characters in any Shakespeare production.  In modern productions it is important to keep casts small and as a result many of these minor characters are double cast and thus the opportunity for beginning actors to make a fabulous impression with a small role are reduced.  LaGue plays a doctor, the porter, Siward as well as Duncan, and the three witches also take on the characters of many other parts from Lady Macduff to murderers, a Gentlewomen, Donalbain, the young Siward, Fleance and many others.  The three ladies do a superb job in many of these other roles, losing their wicked witch personas and adopting accurate representations of the other characters. 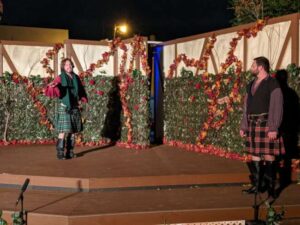 The role of Lennox is played by Timothy Daggs, an excellent portrayal.  Ross is revealed by Caleb Matthew Frank with expertise and Angus is also excellently done by Joseph Hoffman.  These portrayals are all enhanced by the fight direction from Kris Kuss as well as the overall directing expertise of Woods.  Often overlooked are the contributions of Understudies but their importance is vital to any production.  They are Jodianne Loyd, Tyler Malinauskas, Addison Pollard and Devin Ricklef.

In addition to Woods and Kuss the production team includes Emily Bond, Production Stage Manager and Brenna Crow, Assistant Stage Manager.  Costume Designer Chloe Mullin elected to garb the gentlemen in kilts to emphasize the Scottish setting although the modern kilt was not developed in the 11th century, the historical time period represented in the play.

In the small theatre one passes through to the amphitheater is a small display presumably put together by Emma Woodward, Dramaturg.  It is worth a read as it gives the origin of some of the most interesting ingredients used by the witches. 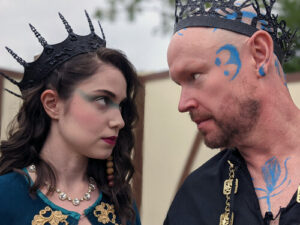 Two Dynamic Personalities, with Madelyn Sproat as Lady Macbeth and Michael Stewart Allen as Macbeth dare to risk it all. Photo courtesy of Shakespeare in the Park.

Although the weather is quite mild, comparatively, and even windy Oklahoma usually settles down after dark, the early cold snaps of the season are particularly hard on older bones.  Dress warmly.  It is important to grab a lawn chair as the ground is not so comfortable, but lawn chairs are notoriously inadequate in shielding the nether regions from the chill.  Winter coats may not be necessary for normal gadding about, but for sitting for an hour or two they are essential.  Boots and thick heavy socks (at least two pair) are recommended for an October production given outdoors.  There is no doubt that much of the chill is psychological, but it is best to come prepared…one can always wad up the extra blanket and use it as a cushion!

“Macbeth” runs through November 14, 2021 at Oklahoma Shakespeare in the Park.  The amphitheater is located in the back of the location at 2920 Paseo in Oklahoma City.  Curtain is 8:00 pm Thursday through Saturday.  For further information visit www.okshakes.org or call 405-235-3700.  After all, there are still a number of pleasant nights ahead.