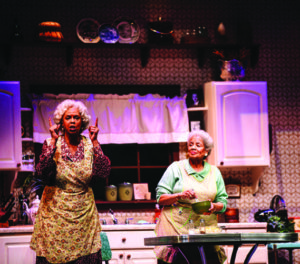 “Having Our Say” is Emily Mann’s thoughtful adaptation of the successful book written by Sarah L. Delany and her sister A. Elizabeth Delany with Amy Hill Hearth. The full title of the book is ‘Having Our Say: The Delany Sisters’ First 100 Years’. The memoir details the amazing and fascinating lives and careers of these two maiden lady sisters leading extremely fulfilling lives. As women of color the Delany sisters faced a changing world reluctant to accept them. Never allowing any obstacles to defeat them they show unfailing determination to succeed.  Listening to their life stories it is easy to see each sister was and is able to balance hurdles with brilliance—intelligence, wit, beauty and courage.  They also have the advantage of education. That is what Bessie says ‘makes the difference’ between achievement and stagnation.

Monique Midgette directs “Having Our Say” with great skill.  Midgette is making her directorial debut at Lyric.  Being true to the authors is imperative for creating an accurate picture of these wonderful sisters and Midgette skillfully makes the connection a direct one.  Amy Hill Hearth is the author of the book alongside, of course, Sadie and Bessie Delany. Emily Mann is the playwright who created the wonderful script allowing the actors to tell the story with realism and truth. 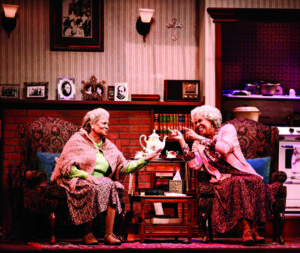 Two fabulous actors bring Bessie and Sadie to life again allowing us to appreciate and learn from Delany wisdom, Delany strength and courage as well as a very lasting beauty.  Terry Burrell is a marvelous Sadie, full of vigor, humor and delight.  Sadie is a teacher, the first African American allowed to teach High School Domestic Science in the New York City public school system.  Burrell brings Sadie’s common sense approach in life to the fore and makes one wish to be a student in her class.  Julia Lema is delightfully feisty as Bessie willing to take on the world with just a little attitude.  Bessie is a dentist, the second woman to be a licensed dentist in the state of New York.  Together the women are charming in their interplay lasting a century.  Neither seriously considered marriage although they both certainly had their share of young gentlemen calling, they were too busy with their careers and forging a life of grace. These two vibrant women have always been content with the companionship of each other.

In our youth we are often impatient with our elders, the stories they tell have no relevance to our lives.  Oh, but they do!  The significance of the past becomes more apparent as we grow in our own years, and somehow elders get smarter.  Sadie and Bessie Delaney have the wisdom of the ages and the style of independence that makes them modern throughout their entire lives and they live to be 109 and 104 respectively. 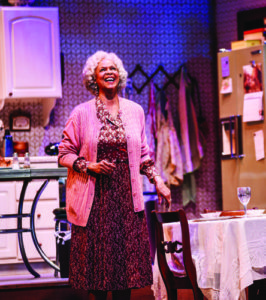 Terry Burrell as Bessie in “Having Our Say” at the Lyric Theatre. Photo courtesy of K. Talley Photography

The audience is welcomed into their home as if they just popped in for tea and a quick human interest piece from journalist Amy Hill Hearth.  It becomes more than that; as they reminisce in their lovely house filled with the memorabilia of their lives. Sadie and Bessie are the daughters of a man born in slavery, a man who was able to become a success in life in spite of the obstacles faced by people of color in the South following the Civil War. Their mother gave them grace and wisdom as well as beauty. Both parents provided a sense of empowerment to their children and their ability to succeed regardless of the barriers to overcome.  As the day wanes, the dinner hour approaches and Sadie and Bessie begin to prepare a feast to honor their father’s birthday on this day in 1858.  By the second act the two frisky ladies glide through the kitchen with the ease of long practice working together.  The odors of Chicken, macaroni and cheese as well as the cinnamon, citrus and coconut ambrosia delight our senses as the delicious smells waft throughout the theater.

Midgette is fortunate in a great crew for “Having Our Say” especially from Scenic Designer Kim Sivigny.  The set is beautiful, so much every grandmother’s home, full of memories, fascinating stories, wonderful books and love.  Lights by Fabian J. Garcia and sound by James Grigsby add wonderfully to the ambiance. Jeffrey Meek definitely raided Gram’s closet.  Laurena Sherrill holds it all together allowing Midgette and stars Burrell and Lema to shine. 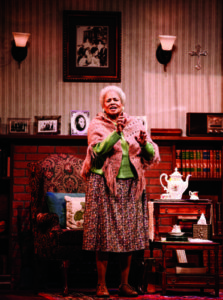 Julia Lema as Sadie in “Having Our Say”. Photo courtesy of K. Talley Photography

Plays don’t usually provide much aromatic stimulation, but “Having Our Say” does!  Burrell and Lema are cooking real food and it smells real good.  Lyric on the Plaza is surrounded by excellent restaurants, so consider planning to come early enough to dine before the show; many patrons leave the theatre ravenous.  Dinner before the show is recommended at Pritchard, Empire Slice House, Oak & Ore, Saints, The Mule, The Press, Mexican Radio, Goro Ramen, Cheever’s or Grand House are just a short walk to the theatre.  Dinner after the show is equally delicious. 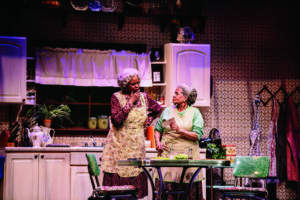 Mmmm Something is  Cooking at the Delany house-and it is more than food!   Bessie (Terry Burrell at left) and Sadie (Julia Lema at right) Photo courtesy of K. Talley Photography