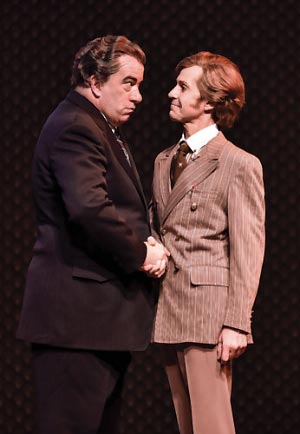 Peter Morgan’s Frost/Nixon is based on the 1977 televised interviews between British talk-show host David Frost and the resigned and disgraced President Richard Nixon. When the Watergate scandal happened, the country became divided. The president resigned and was immediately pardoned, leaving the American people with none of the answers or justice they deserved. Americans lost faith in the political system. They became hardened by the idea that the very office they held in highest regard was nothing but a corrupt business. The lives and trust of the American people were just the pawns to be bargained with, the voiceless casualties of the rich and powerful. Sound familiar? Lyric Theatre of Oklahoma presents this play at another critical time in U.S. history. Critical because it’s important to have these conversations, and critical because the feelings now are the same as they were then. The parallels are eye-opening.

D. Lance Marsh steps gracefully into the role of Nixon. His physical transformation into playing the president is striking. He looks just like the man, both in demeanor and in his onstage presence. It’s breathtaking before he even begins to speak. Marsh tackles the role of this complicated figure, one who is still synonymous with political scandal and large-scale failure. There’s no ranting and raving or archetypal proclamations. Marsh makes Nixon the one thing that most people can’t see him as: human. He has doubts, like we all do. He has insecurities, like we all do. And he’s deeply affected by the hurt he’s caused the American people. He’s also paranoid, a drunk, and an egomaniac. Marsh embodies it all, and yet he’s relatable. He’s understandable. He’s broken. He’s everything a president should and shouldn’t be- flawed, and real.

Matthew Alvin Brown is the interviewer David Frost. It all hinges on his bold idea to ask the ex-president for an interview. Nobody takes Frost seriously. His show in Australia has been canceled, he’s known around the media world for being a play-boy and a big spender. He’s a laughing stock. Give this character to Brown, however, and he’ll turn the tides on you. Take a desperate, disgraced public figure, and Brown makes him the underdog you root for. Brown’s Frost is smart. He’s in over his head, but he knows television. He knows viewers, and what the American people want to see. He’s an outsider, British to say the least, and not in the slightest bit a hard-hitting political journalist. But, he’s not to be written off so easily. Brown proves his character’s worth, and the depth of his intelligence. It’s a fascinating detail that the character (and real person) is named David. He does indeed slay giants. The subtle brilliance of Brown’s acting skills is apparent. His performance creates an empathetic character with deep humanity and honesty.

Each man has assembled his team of advisors in preparation for the interviews. In Frost’s corner is Jim Reston- Nixon biographer and author, portrayed by Gregory DeCandia. Also on Frost’s team is John Birt, played by David H. Dobson, and Bob Zelnick, played by Jonathan Beck Reed. DeCandia possesses a youthful anger that resonates with the current feelings of political upheaval. He carries his hatred and feelings of injustice as he narrates the story to the audience, a true voice of the people. Dobson and Reed prove to be trustworthy and hard-working, despite their doubts that Frost can become a worthwhile opponent of Nixon.

Perhaps the most pivotal member of Frost’s team is his girlfriend Caroline Cushing, portrayed coolly by Emily J. Pace. Pace is impressively strong and modern, with a head on her shoulders and a no-nonsense demeanor. She balances the panicky Frost in his moments of self-doubt.

In Nixon’s corner is Andi Dema as Jack Brennan, Rodney Brazil as Manolo Sanchez, and Ronn Burton as Swifty Lazar. Dema also alternates with DeCandia as narrator, this time speaking for those still in the Nixon camp. Devoted through and through, Jack Brennan is Nixon’s chief of staff and his most vocal advocate. A military man, Brennan believes in protocol and serves his president without falter. Dema makes an imposing loyalist, gruff but not without heart. Burton is sleazy and slimy as Swifty, a man after money and fame. He’s full-bodied and dead-on accurate with his portrayal. With the physical characteristics and voice that Burton employs, another striking resemblance is created on stage. 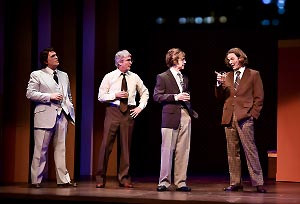 Kaylila Pasha is briefly seen as the demure Evonne Goolagong, an Australian tennis player who Frost interviewed before he struck a deal with Nixon. Pasha is also seen as a camerawoman during the onstage filming of the interviews. She’s apt and sharp. Let’s see more of her in future productions.

Nearly the entire show is filmed and projected on a large screen above the stage. This unique quality opens up a world of possibilities for the performers. They continue to act in scenes backstage, showing intimate moments and conversations. One scene even continues into the lobby and the bar of the Lyric’s plaza theatre. This is brilliant direction by Michael Baron, and it elevates this timely choice of a play. It serves as a constant reminder of the timeframe, when television ruled and the story shown over the air was only ever a fraction of the truth. Lighting design by Fabian J. Garcia creates a narrative all on its own, and Jeffrey Meek’s costumes are as always perfectly suited for the era.

Brown speaks for all of us when he stares, unblinkingly, into the face of the most corrupt U.S. administration the world had seen to that point, and demands answers. His gaze is reflected in the studio cameras and projected on the screen above. Marsh matches the intensity of that gaze, and he apologizes. It’s felt deeply, with a current of relief running through the audience and hitting in the heart. It could be, in this moment anyway, that we’ve finally received an apology. This apology, spoken from an ex-president in 1977 to an audience in 2019, stands as a reasonable facsimile for an entirely different apology. It’s one we may never get, but nonetheless deserve.

Sometimes the spectacle of theatre starts to become a bit blurry; a beautiful blur, but all the same. Sitting down to a serious piece that elevates the fine quality of acting we have in Oklahoma City brings me back- to earth after flying so high, and to the heart of why I love storytelling and theatre so much it hurts. This is a fine production with superb talent. And it couldn’t come at a better time.

Lyric’s Frost/Nixon runs until September 22nd at their Plaza district theatre. For tickets, visit lyrictheatreokc.com or call the box office at 405-524-9312.