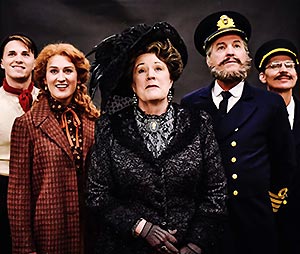 The final show in Lyric Theatre’s blast from the past summer series is the disaster tale Titanic. Though not the same plot as the Oscar-sweeping blockbuster movie, the stage version debuted the same year on Broadway, and enjoyed comparable success at the Tony’s in 1997. This story is a musical, and the Lyric is making sure to pack every inch of the Civic Center Thelma Gaylord stage with talent. In order to bring Titanic back from the depths, the cast of 41 is joined by a choir of 58 and a 22-piece orchestra led by OKC Philharmonic’s Alexander Mickelthwate. Phew. Got all that? Good, because there’s more. The Civic Center Lobby will also be adorned with real Titanic artifacts, thanks to a collaboration with the Titanic Museum Attraction out of Branson, MO.

Lyric Theatre Producing Artistic Director Michael Baron says “I recently visited the museum and was impressed by the way they tell the story of the R.M.S. Titanic and the emotional journey of the people on board. I would like to thank the museum for making this Lyric production a truly once-in-a-lifetime theatrical event by sharing artifacts that were held and owned by Titanic passengers.”

On display in the lobby will be items that belonged to infamous survivor “Unsinkable” Molly Brown and Bandleader Wallace Hartley, as well as a White Star Line (parent company of the RMS Titanic) cup and saucer.

Like the Lyric always does, this production promises to be epic and grand-scale, with no detail spared. Lyric’s creative team has delved into the real-life story of Titanic, researching eyewitness accounts, diaries, and photographs, to present a truthful and honest telling of the real people aboard the ship that famously sank on her maiden voyage. A mix of fictional and factual-based characters bring this 1912 tragedy to life this Summer at the Civic.

Ian Marcontell returns to the summer series after last season’s Mamma Mia and this spring’s Lyric Plaza production of Girlfriend. He enlightened us with an in-depth Q&A about the show and his role:

OKASH: Tell us about your character! What do you like about him? How do you relate to his story aboard the “ship of dreams?”

Marcontell: I play Frederick “Fred” Barrett, a lead stoker (or fireman) on the Titanic. Essentially my job, along with my fellow stokers, is to shovel coal into the boilers of the ship, powering the steam engines for hours at a time under 100 degree-plus temperatures. I have to say that my favorite trait of Barrett’s is his passion. Being far from a rich man, he still accepts his daunting position upon this modern miracle gladly, and even when he recognizes the mounting problems occurring, he still holds great admiration for the ship all the while. But above even his own amazement, he does nothing but count the days until he can return to his true love, who waits patiently back in England for what should be a short return. It’s this passion for the truly important things in life, as well as his own dreams, that I feel like I can relate to. 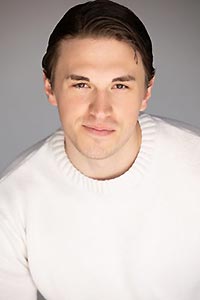 While I definitely don’t have a nearly as physically demanding or dangerous job as Barrett, for as long as I’ve been acting, I still find excitement with every new project I am able to be a part of, definitely including this wonderful production. And we can all, of course, relate to the pursuit of the universal dream and passion, love.

OKASH: Titanic features a mix of characters based on real people aboard, as well as those who are purely fictional. How has it been challenging, and how is it rewarding, to be in a show with this kind of dynamic?

Marcontell: Playing a character who is based off of someone who truly existed is always challenging because you want to honor the memory of that person, often without ever getting to actually meet that person. But what is ultimately so rewarding about a challenge like that is that while there are always characteristics and dramatizations added for the sake of invoking the being of a whole human in a two-ish hour timespan, we as actors get to introduce these people to a whole population of others who never got to experience them, and to continue the legacy of their life in hopefully the most honorable way possible.

OKASH: The sinking of the Titanic represented the dashed hopes and dreams of all her passengers. Do you think this musical tells that story of hope mingled with tragedy and how does it represent that lost potential?

Marcontell: I think it most definitely tells the story of hope mingled with tragedy. Throughout history, one stricken and categorized around tragedies, when a horrific event such as the sinking of the Titanic occurs, we as a human race have proven to have the capacity to come together and make change happen for the betterment of everyone. A nautical-based incident on the sheer scale of the Titanic, even as we have completely broken the limits at which we functioned in that time period, has never happened since that infamous accident. That being said, we don’t learn the most from a lesson by the “good things” that come from it, we learn from the mistakes and the consequences.

While the Titanic event was due in part to cataclysmically unfortunate circumstance, it was also due strongly in part to hubris, which is why we still tell the story of its lost potential today- as a prolific example of the truth that we, in life, are often not always playing for the same team. But if we could learn to come together without needing horrible strokes of fate to do so, we could be that much closer to making sure that incidents like the Titanic are few and very far between. 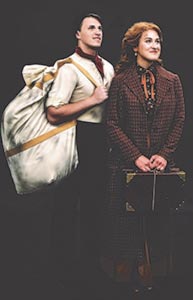 This last production of Lyric’s 2019 Summer at the Civic series opens July 23rd and runs until July 28th. Tickets are available at lyrictheatreokc.com or the box office, 405-524-9312.