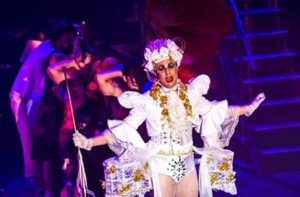 Since 1973, almost everyone that loves this spooky time of year has experienced the outrageous cult classic ‘The Rocky Horror Picture Show,’ whether from the original London production in 1973 or both the Broadway production and hit movie starring Tim Curry as Frank ‘N’ Furter in 1975.   In 2016, J. Robert Moore portrayed Frank ‘N’ Furter at Lyric Theatre to rave reviews; now Moore has returned to direct, ushering in Eric Ulloa’s turn in platforms to dazzle Oklahoma audiences!

Richard O’Brien not only wrote the book, music and lyrics for the musical stage version as well as the film, but he also portrayed the character of Riff Raff in both the stage productions and the movie.  Clearly once “The Rocky Horror Show” gets into your blood, it never gets diluted.  Cast, crew, and audience alike always come back for more and Lyric Theatre presents the show every three years, each time a little different but always ostentatiously delicious. 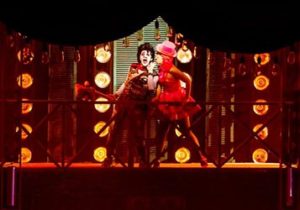 Moore’s direction is inspired and exciting.  Part of that comes from the incredible set design by Jon Young and creative lighting by Fabian Garcia.  Along with sound by J. Grover Hollway, they make a set fit for the glitzy glamour that is Rocky Horror.  Music Director Brian Hamilton is obviously having lots of fun and choreographer Hui Cha Poos combines energy, gyrational grace and skill to the actors.  By the final rehearsal the performers are now in full gloriously complicated and thrilling costumes from Armando Ortiz.  The actors shine through more layers of expertly applied makeup than Sephora could sell in a year.  It is magnificent, stupendous, explicit, hysterically funny, shocking, chilling and sensational.

The approach to the show varies from one production to another as each director puts his own stamp on the show.  Moore’s vision takes a slightly more sinister approach.  The entire cast performs with brilliance, superb timing and excellent expressiveness.  As the play begins the two usherettes, Magenta and Columbia, set the stage in incredible and very sexy costumes.  Kat Metcalfe and Janna Linae Schmid portray Dr. Frank ‘N’ Furter’s wayward assistants with distinction. 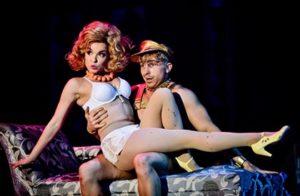 We meet two young lovers, newly engaged and freshly vowed to be forever faithful.  Antonio Rodriguez is Brad Majors, a typical preppie of the 50’s and 60’s era; he comes across delightful but a bit stiff.  Emily J. Pace is Janet Weiss, is like most young women of that era: more in love with the idea of being in love over love’s reality.  Virginal yes, but sensual? Oh yes!  Their car gets a flat and the only nearby help is at an ominous castle.  The two seek and receive more help than every expected. 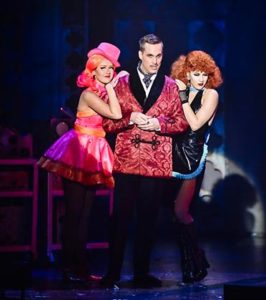 Brett Young is the Narrator, his flair and expressive eyebrows highlighting intense blue eyes as he warns us of the impending doom awaiting these two as Brad and Janet enter the forbidding edifice.  Young guides the actions and upcoming scenes with a seaming flow that does not interrupt or interfere, only adding more to the show.

Elvie Ellis is Riff Raff, the overseer of his master’s castle.  He is flamboyant with a mischievous glint that is just as foreboding as the Narrators glare.   Riff Raff seems slightly disgruntled, as if his master has found another minion to replace him.  Ellis is a master at the unsaid.

And now, enters the master, the puppeteer, the mad transvestite scientist, Dr. Frank ‘N’ Furter!  He is a little more menacing than often seen and that, combined with his height, gives the audience an enthusiastic shudder the moment Frank ‘N’ Furter appears.  Eric Ulloa commands the stage and has created a memorable and imposing doctor that shivers the senses.  He is sumptuously attired and fluent in the language of innuendo and libido.  Although he is quite imposing, he is tremendously amusing as he struts about intimidating the two young lovers with flair and fun.  Like Dr. Frankenstein, Dr. Frank ‘N’ Furter has created a perfect specimen-a perfect specimen of manhood and he is anxious to reveal the wondrous birth of Rocky. 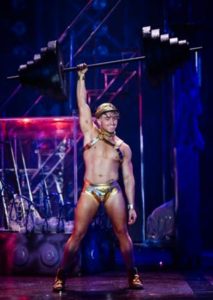 Haulston Mann plays Rocky, a perfect ideal of masculine form and function—compact, muscular and sensual from the moment of his birth.  What else could he be with such a creator?  Like Frankenstein’s monster he, too, must escape the confines of such close interaction with his imposing God-unlike creator.

Matthew Alvin Brown performs dual roles, Eddie and his uncle, Dr. Scott.  Eddie is the first but failed effort of the Frank ‘N’ Furter experiments. Dr. Scott happens to be a professor of Brad and Janet’s.  He arrives at the castle and Brown plays him with great humor and delight, an interesting contrast to Eddie.   He is in control, but possibly just as mad as Frank ‘N’ Furter.

The four Phantoms are Marcus Canada, Kylan Durant, Alexis Lanzo and Brooke Melton.  Each of them are costumed beautifully, choreographed magnificently and bring depth to the production that is imperative to the show.

Amidst all the splendor and humor the band plays on and the audience joins in motivated to participate as ‘heckling’ is acceptable.  The music is grand; the urge to move is undeniable; let’s do the ‘time warp’ again! “The Rocky Horror Show” combines science fiction and horror with rock and roll and cockeyed romance.  The result is comedy beyond comical–the show is full of chuckles, laughs, guffaws, snorting, stamping and general hilarity.  The plot contains all the elements of the most entertaining theatrical events and goes on and on.  J. Robert Moore obviously had a great deal of fun directing, and the actors most definitely have a wonderfully fun experience.  The audience can’t help but have a fantastic time, and they do, they will and so will you.  Besides, it is also just plain naughty! 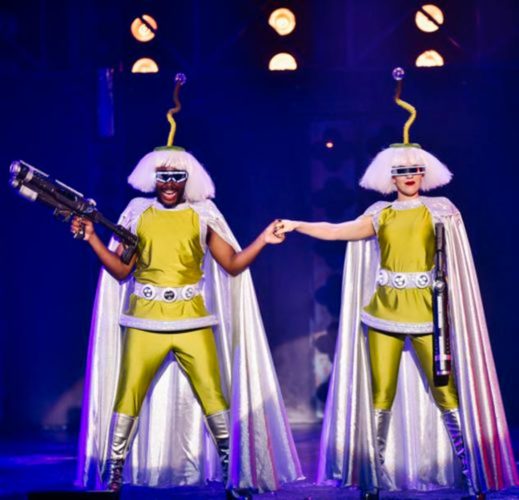