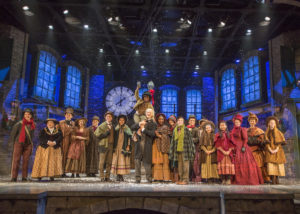 Charles Dickens wrote “A Christmas Carol” in 1843 during a time of change and the resulting chaos resulting from that change.  The industrial revolution was altering almost every aspect of society as masses of rural residents moved into crowded cities to take advantage of the jobs provided.  The resources needed to accommodate these hardworking industrious individuals did not exist and the wages were appallingly low.  There were no labor laws to protect employees and employers took advantage of the lack in critically damaging ways exploiting women and children at an incredible rate.  Queen Victoria and her Prince Consort particularly led the country in making some changes, but changes are difficult and the entrepreneurial individual was able to take advantage of the system in place.  Life was hard for    those trying to survive and plagued by ignorance and want.

This was also a time when the resurgence of Christmas Carols was in vogue and Queen Victoria had made newer traditions such as Christmas Trees popular.  Dickens was profoundly affected by his own childhood experiences in the mines and after a visit to the Cornish tin mines he wrote the novella: “A Christmas Carol in Prose, Being a Ghost Story of Christmas” commonly known as “A Christmas Carol” on the heels of this visit.

Since that time there have been numerous adaptations of the popular story including the wonderful adaptation by Michael Baron.  Baron is Artistic Director at Lyric and has made “A Christmas Carol” a Lyric tradition for the past seven years.  Since the first production Lyric’s “A Christmas Carol” has been sponsored by Devon Energy.  Baron directs Lyric’s show while simultaneously directing the show at Ford’s Theatre in Washington D.C.  The adaptation by Baron is quite musically sophisticated and Lyric puts on a shimmering show for Oklahoma audiences. 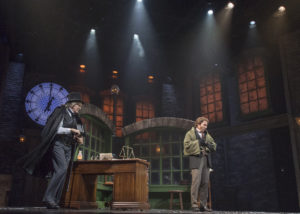 “A Christmas Carol” chronicles one lonely Christmas Eve in the life of Ebenezer Scrooge.  Scrooge is a wealthy man and is the sole proprietor of Scrooge & Marley since the death of Jacob Marley seven years previously.  Scrooge does not keep Christmas, and believes that he has no responsibility for the needs of others including his own clerk, Bob Cratchit.  On Christmas Eve, the specter of his old deceased partner, Marley visits and warns Scrooge that he can redeem himself if he listens to three spirits who will visit him.  They are the Spirits of Christmas Past, Present and Yet to Come.  After the visitations Scrooge can change his attitude and affect the lives of many others, especially the Cratchit family, and his own surviving nephew, not to mention him own life.

The role of Ebenezer Scrooge is done by Dirk Lumbard, a seasoned actor with a very interesting interpretation of Scrooge.  Initially his Bah! Humbugging is almost menacing as well as uncaring, but as he begins to understand what the spirits teach his transition subtly moves into slightly mischievous, and, becomes marvelously almost cute.  As a result, this Scrooge becomes remarkably endearing and delightful due to Lumbard’s excellent efforts. Bob Cratchit is played by Charlie Monnot brilliantly.  While Cratchit is definitely cowed by his master, one sees the little rebellions that make his workday tolerable.  The respect he gives to Scrooge becomes understandable.

It has been said that there are no small parts, only small actors and it is often the case that cameo roles can be exceedingly entertaining and Baron’s adaptation makes the most of the smaller roles in “A Christmas Carol” bringing out the unique and very interesting characters that Dickens originally created.  The result of this approach enhances the major roles giving Ebenezer Scrooge and Bob Cratchit greater depth and meaning.

An excellent example is the role of Mrs. Dilber played by Brenda Williams.  Williams is an excellent character actress and Mrs. Dilber very is funny, informative and represents our typical idea of the good woman of her time and place.  Her accent is a nice touch, not overdone, but just right.  She has a few wonderful moments with Topper, a wonderful character played by Matthew Alvin Brown.  Brown plays Topper as shy, bumbling and rather adorable.  The spirit of Christmas Present takes Scrooge to the home of his nephew, Fred and his wife.  Their guests are Topper and the sister of Fred’s wife.  Susan Riley is a very silly sister, giggling and flirting with Topper as the invisible Scrooge looks on.  Riley makes the most of her scene.

Nephew Fred is deftly handled by Andi Dema.  It is clear that he sees the hidden kernel of humanity left in his miserly uncle’s soul.  His sheer joy at finding his Uncle’s change is remarkably real and natural. Jennifer Teel plays Mrs. Fred, she is not so flighty as her little sister, she is lovely, humorous and an ideal wife.  Scrooge soon realizes that she is quite similar to his own lost love, Belle and he realizes how unimportant the dowry should be when a good woman can be found!  Dema also plays the younger Ebenezer Scrooge; very similar characters but Dema defines them with a slight and very refreshing difference.  Jennifer Teel exhibits a wide range in talent and is completely unrecognizable as the charwoman in another scene.  Dema and Teel make a lovely couple.

Dema is also half of another lovely couple as the younger Scrooge opposite Lexi Windsor as Belle.  Windsor brings a very realistic characterization to Belle, and her grief at seeing young Scrooge fall in love with gold is palpable.  Later on, her joy in her marriage is equally interesting.  Windsor also has a very wide range and considerable talent! 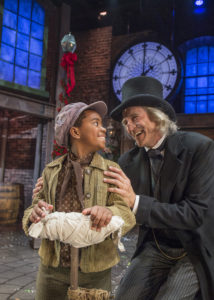 Complimenting Monnot as the perfect Cratchit family are Nakeisha McGee as Mrs. Cratchit and from the Holly cast, Myles Currin-Moore as Tiny Tim or from the Ivy Cast, Anthony Neumann as Tiny Tim.  The children in the show are double cast playing on alternate evenings, to give more opportunity to young talented actors, and not to overtax them.  “A Christmas Carol” opens Wednesday, November 29 with the Holly Cast, seen for this review.  McGee’s Mrs. Cratchit is powerful, her voice resonates and she wears her heart on her sleeve with great skill.  The relationship between Mr. and Mrs. Cratchit is complementary, interesting and loving, and McGee’s performance reveals the glue that binds this family in love.  Further, McGee’s performance enhances the performances of the children in the Cratchit family, and in the entire cast.  From the Holly Cast, McCall McCarty is Martha Cratchit, a demure and lovely young lady, and Ethan Wells is Peter Cratchit, a well brought up young man.  Camille Matlock is the sweet Belinda Cratchit, the third of the four children, and, of course, Currin-Moore is delightfully cheerful despite his illness as Tiny Tim.

Also from the Holly Cast are Lily Voth as Fan, Scrooges young sister and one day mother to Scrooges nephew, Fred. Voth gives a very meaningful performance to the loving sister of the lonely little boy Scrooge was in his youth.  Her scene with Ethan Wells as the young Scrooge as well as the older Cratchit boy is very heartwarming and sad.  Reese Freund is the Turkey Girl, and Emma I.X. Wells is also a schoolgirl.  All of these children from the Holly Cast perform with honest dedication and are destined for future theatrical careers should they choose.

On alternate evenings the children of the Ivy Cast perform.  Every indication is that these youngsters are equally talented and professional in their performances.  They are: Abigail Ruth Manners as Belinda, Delaney S. Horton as Fan, Claire Grace as Martha, Brayden Q. Tran as Peter/Boy Scrooge, Nate Peterson as Turkey Boy/Schoolboy and Katrina Gedmin as a Schoolgirl.  And of course, Anthony Neumann is rumored to be just as adorable as Myles Currin-Moore in the role of Tiny Tim.  Parents and friends of children in the cast please specify with the box office whether your special actor or actress is Holly or Ivy! 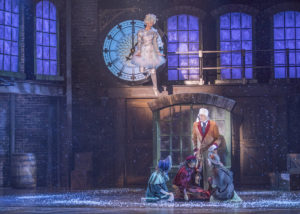 Natalya Ferch, the Ghost of Christmas Past, flies above Dirk Lumbard (Ebenezer Scrooge) and children…Photo by KO Rinearson

The ethereal stars of “A Christmas Carol” are exciting and thrilling in every aspect.  When Thomas E. Cunningham enters as the frightening spirit of Jacob Marley, a chill creeps down the spine.  His vocalizations are menacing and the electronic otherworldliness provided by the technical crew is phenomenal.  Cunningham is perfectly frightening and in another scene becomes frighteningly perfect yet unrecognizable as the eccentric glad hearted Mr. Fezziwig!  The Ghost of Christmas Past is beautifully done by Natalya Ferch.  She sweeps in flight over Scrooges’ head as she admonishes him gently to follow her and learn.  Her grace and athleticism are equal to her acting abilities.  Her fairy/ballerina costume and demeanor is beautiful.

The Ghost of Christmas Present is powerfully done by Mateja Govich.  His imposing façade and fabulously robed presence intimidates Scrooge with a slightly professorial approach and he is undeniably convincing in this role, and then he is also unrecognizable as one of the townspeople in the neighborhood.  His costume is magnificent and hides a shocking truth.

The final spirit appearing to Scrooge is the Ghost of Christmas Yet to Come.  He is a technical masterpiece combining the skills of Puppet Designer Penny Benson and Costume Designer Jeffrey Meek.  From the elegant and intricate set courtesy of Kimberly Powers, to the creative lighting effects from Weston Wilkerson and the realistic properties by Courtney Strong “A Christmas Carol” is a technical masterpiece.  Michael Baron is an astute director and it shows in his crew.  Working alongside Baron to create a powerfully effective and polished production is Josh Schmidt, responsible for the original music and sound design with Brian T. Hamilton as Music Director.  Each step taken by the cast is guided by Ashley Wells, Choreographer, as the characters dance on several occasions and move with grace at all times.  Nicholas Bartell’s valuable contribution coaching dialects is undeniable and Bryan Bauer keeps it all organized managing the stage.

Lyric’s “A Christmas Carol” can be enjoyed through December 24, 2017.  What a lovely Christmas Eve for the family!  Performances are Wednesday and Thursday evenings at 7:30 pm, Friday and Saturday evenings at 8:00 pm, and Sundays at 7:00 pm.  The Lyric Theatre is located in the revitalized Plaza District at 1727 N. W. 16th Street between Classen Boulevard and Pennsylvania Avenue, parallel to Oklahoma City University on Blackwelder and 23rd St.  Administrative Offices and Lyric’s Academy is near, at 1801 N. W. 16th Street where there is plenty of parking.  Visit lyrictheatreokc.com to gain information or purchase tickets or simply call the box office at 405-524-9312 between noon and 5:30 Monday through Friday.  Come a little early and enjoy some great Pizza or deli sandwich, or even some ice cream at one of the great gustatory pleasures located in the entertaining Plaza District.  An evening with Dickens classic tale “A Christmas Carol” visiting Lyric at the Plaza is definitely unforgettable!