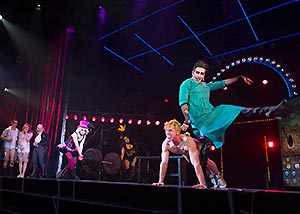 Cult classic The Rocky Horror Show makes a long-awaited return to Lyric’s Plaza Theatre! Shiver with anticipation no more. The Lyric only does this show every 3 years, and luckily it’s on in 2019! Rocky Horror has a following like no other, with an ability to raise the freak flags in even the most demure fans. Case in point: yours truly is planning to wear a corset and purple eyelashes to the show on opening weekend!

Rocky Horror is nearly nonsensical in the looseness of the plot. However, there’s a true perfection in it that can’t be found in any other theatrical experience. The Rocky Horror Show just fills a particular void, and that’s what makes it so popular. It’s a release from daily life and gives us a chance to truly embrace, accept, and daresay even love, ourselves and each other. Surprisingly, the 1974 stage play came first, a year before the iconic movie. Though he starred in both the London and Broadway productions, the movie in particular served to canonize Tim Curry as the sweet transvestite we all know and love, Dr. Frank-N-Furter. With book, music, and lyrics by Richard O’Brien (aka Riff-Raff in the original production and film), The Rocky Horror Show invites patrons on a strange journey. It takes you into the world of science fiction, B movies, and all the over-the-top campiness of the 1970s.

The titular character, Rocky Horror, is a lab-created Frankenstein type muscle-man, clad with blond hair, a tan, and the world’s most iconic pair of gold short shorts. Haulston Mann returns to play Rocky, as he did in The Lyric’s 2016 production. He was gracious enough to take time out of rehearsal and role prep to answer a fun Q&A for us below:

OKASH: Tell us about playing Rocky Horror! What’s most exciting about returning to the Lyric for this role? 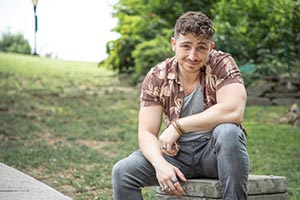 Mann: To me this show is as close to a clown show as I’ve been in since studying clowning in college. It has a cast of heightened characters in absurd situations, and it’s rooted in being present and working off the audience. You never know what callbacks they’re going to throw at you on any given night, and breaking the fourth wall and interacting with them makes each performance special and fun in its own way. I often tell people that my first run as Rocky was some of the most fun I’ve ever had on stage, and that’s because everyone in the theatre- actors, audience, musicians, is in communion with one another.  It makes it hard for folks to passively sit back and zone out. I think that’s exactly the experience theatre should provide now that we’re in the age of Netflix.

OKASH: The Rocky Horror Show is iconic, with a loyal following that has spanned generations. What do you hope long-time, and brand new, fans of Rocky Horror will get to experience during this production?

Mann: My favorite thing about The Rocky Horror Show is that it was shown all over the nation, even in some of the smallest towns. And those screenings were places where EVERYONE was welcomed. It didn’t matter your sexual preference, identity, whatever. A screening of RHPS was a place where you could go and be YOU. I hope that long-time fans can tie those memories of being accepted to our production, and that the Virgins can also find that same spirit of acceptance.

OKASH: How old were you when you first watched Rocky Horror? What was your initial take on it? And has your opinion changed since?

Mann: I saw it when I was about 16 at a friend’s house. I’d just discovered theatre and I thought that it looked so fun, even though I didn’t know what the hell was happening towards the end. But I never thought that I’d perform in it! Musicals were never really my focus, so I was actually very grateful to earn the experience of getting to perform as Rocky at Lyric in 2016! It’s now one of the only musicals I audition for regularly!

OKASH: Most importantly! Are you ready to be (almost) naked on stage!? What is that like? Scary? Exciting? All of the above!?

Mann: Honestly, when I’m on stage and in character, it’s no different than any other costume. Once it’s go time, I don’t let myself think about it. The difference is the prep and maintenance work I do before and during the show. Thankfully, Lyric gave me several months’ notice when they made the offer, so I had plenty of time to structure a cut program to get a physique worthy of donning the golden undies.

I’ll be posting progress pictures of my cut on Instagram @haulstonmann if anyone wants to see the transformation. Folks can also check out some more of my work on haulstonmann.com. 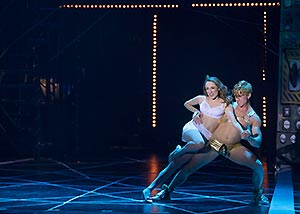 An important note from Lyric Theatre about the production: Patrons are encouraged to dress as their favorite characters from the show. Additionally, audience participation prop bags will be available for purchase for just $5. Outside props are not permitted.

Lyric Theatre’s production of The Rocky Horror Show opens Wednesday, October 9th and runs through Saturday, November 2nd at Lyric at the Plaza, 1725 NW 16th St. Tickets are available at lyrictheatreokc.com or the box office, 405-524-9312.