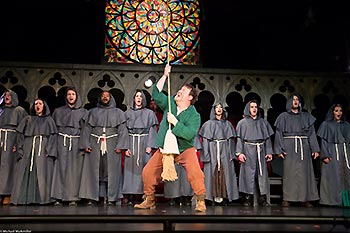 Zachary Wright and the cast of The Hunchback of Notre Dame. Photo courtesy Kismet Arts Studio and Theatre.

The Oklahoma regional premiere of The Hunchback of Notre Dame is a hidden gem in OKC community theatre. Director Angela Polk amasses a large cast of players who possess infinite energy and talent. This version of the musical, though not based strictly on the 1996 Disney film, does feature the music from it, written by the incomparable Alan Menken. This Hunchback is darker, a bit closer to the original Victor Hugo novel. This stage musical features, in stark color, the seedy truths of 15th century Paris. It’s tragic and weighty, a surprisingly haunting show for this bright, cheerful theatre. Themes of religious zealotry, execution, isolation, exclusion, classism, racism, murder, bribery, rape, illness, and misfortune of all kinds run rampant throughout. It’s subtle enough to graze just over the heads of the youngest patrons, but parents and adult patrons feel the weight and charge of the message.

Zachary Wright is the hunchback Quasimodo, one of the most misunderstood heroes in all of literature. Abandoned at birth by the death of his parents and entrapped by his uncle, Quasimodo lives enslaved amongst the bells of the Notre Dame cathedral. His deformities are depicted with makeup and costuming. A brilliant, powerful scene is set in the character’s introductory musical number. Wright scrapes makeup across his face, twisting his normal, pleasant features into scarily accurate deformities as the makeup becomes his mask. Wright then dons the rest of his costume, strapping padding across his shoulders, then the final green tunic, and suddenly he’s not “normal” looking anymore. Wright also bends forward awkwardly, snarls his hands, and drags his feet as he walks. Wright’s transition is positively frightening and heartbreaking all at once. In his own world amongst the bells, Quasimodo talks to his “friends”, the stone fixtures and gargoyles that keep him company as he rings the bells. Quasimodo sings beautifully in his mind, and Wright does this feature justice. Wright has a lovely singing voice, which changes to the uneven gait of Quasimodo’s speaking voice, causing further heartbreak. Quasimodo is also deaf from life under the bells. Wright as this beautiful character gives a heart-wrenching, full-body performance.

Rob Glaubitz is the uncle and religious leader Dom Claude Frollo. Glaubitz towers tall and booms his lines in a deep, guttural cadence. Glaubitz’s Frollo is startling, evil and sick with a snake-like smile and alarming twinkle in his eye. Glaubitz’s singing voice is so deep and menacing, yet crystal clear. It chills to the bones- a feat on an August night. 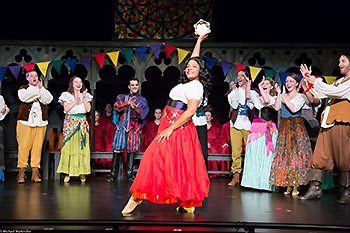 Cheyanne Marie and the cast of The Hunchback of Notre Dame. Photo courtesy Kismet Arts Studio and Theatre.

The young Gypsy woman who turns the world upside down is Esmeralda, portrayed demurely by Cheyanne Marie. She’s a charmer with a sweet singing voice and an enchanting gaze. She turns strong and silent when needed, a survivor through and through. All the drama of this story hinges on Esmeralda. Everyone is getting along in a way they’ve accepted until she shows up, and Marie makes an entrance that is only rivaled by her exit. The most archaic of the characters blame her for their problems, of course, it’s always the woman’s fault, and nobody deserves that indignation less. Esmeralda, like Quasimodo, has a heart of gold.

The ambiguously heroic Phoebus is played by Blayne Childers, a fresh face with a winsome demeanor. Phoebus is a Cathedral Guard of Notre Dame, and presumably Frollo’s man. Childers is valiant and faithful as Phoebus. He too is enraptured by Esmeralda, and his love for her depicts a different kind of love than Quasimodo has for her. These two men fight for Esmeralda in every way they know how by defying the powers against them and never giving up on her. Neither deserves her, but both try in vain.

Seth Paden is Clopin, the Gypsy King and leader of the Feast of Fools. Paden is slightly sinister yet jovial, a strutting, cackling, wild court jester who brings the fun and mayhem to Paris. Paden offers a sigh of relief for the heavy doom of the show, enticing and reminding the audience that all is not how it seems in the world, then or now. 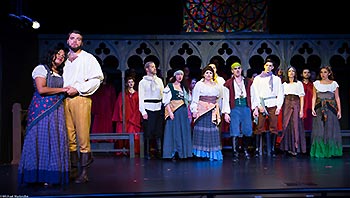 The Hunchback of Notre Dame at Kismet Arts Studio and Theatre.

The memorable, poignant music of Disney is carried well here. The powerful choir is led by Music Director Laura Himes, and the vocals lend themselves to doom and joy, hope, tragedy, and acceptance. Deep lyrics are not missed, despite the ever-present microphone and sound issues that plague the show. All actors and choir members work around it with poise, a slight hiccup that’s beyond their control but adds to the immediacy of live theatre.

The Hunchback of Notre Dame is the counterintuitive fairy tale. The damsels make their own way despite any distress, and there are no princes riding in to save the day. While heartbreaking, it still leaves you hopeful and dreaming of what life could be, and how it might be… someday.