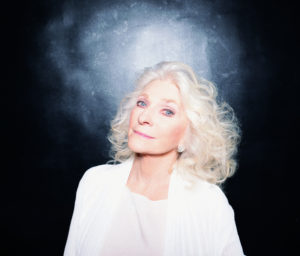 Christmas is upon us!  As usual, the eight-ball is directly facing down this household.  As usual, I’m behind it. There are stockings left to hang, hot chocolate needing marshmallows, and a tree that’s barely trimmed. Of course, last week when everything was still under control, the flu came to visit and nobody did a thing.  Most of all, there is the pressure to find the perfect gifts! And me? What do I want for Christmas? I’d be happy with a new toothbrush right now!

…..Eureka!  I have it.  I know what I’m getting folks, because I know what I want.  I want Christmas to have a final celebration in the early spring, I want to see Judy Blue Eyes, and I want tickets to Judy Collins.  Judy Collins is coming to OKC courtesy of CityRep!  Oklahoma City Repertory Theatre always comes through with a great fund-raising performance, and this year the disappointment that Hal Holbrook retired and is unable to tour was profound.  To have Judy Collins come in March is a wonderful idea.  Tickets to see Judy Collins, March 9, 2018 are an even better idea.  That’s what I want.

Judy Collins has been a sublime folk singer for years, but she has never been limited to folk. Her diversity has been a key component to her success.  Her choice of song is based on quality, rather than genre, and she has always chosen the best of the best.  Her vocals have made her a Grammy Award Winner, but it isn’t an accolade she won—it’s an accolade she earned. She has always chosen what is closest to my heart; just when I needed to hear a message, her voice would come over the radio, singing the song that I needed to hear.

Since I’ve been affiliated with theatre all my life, Sondheim is of course a favorite.  Judy Collins concert, titled “A Love Letter to Stephen Sondheim”, is an outstanding combination.  And of course, included will be an all-time favorite for everyone- “Both Sides Now” written by Joni Mitchell.

After all, I’m getting some folks I know tickets to “Greater Tuna” opening just a few days later, on March 14, 2018.  “Tuna Christmas” is a favorite of my husband, but he has never seen “Greater Tuna”, and he will be so happy Christmas morning to have this to look forward to!