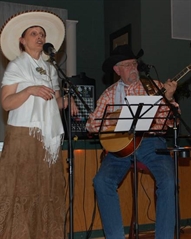 Jim Garling is just about the most versatile crooner around. Garling frequently appears with Byron Berline and is also a member of the Sons of Sage – a group consisting of Garling, with Greg Burgess and Richard Sharp. Sharp and Burgess are regular members of the Byron Berline Band. Garling frequently appears solo, as well as with Berline or the Sons of the Sage, and occasionally with others. His performances are often scheduled at the R & R Restaurant & Event Center, 209 W. Oklahoma, Guthrie, Oklahoma.

Wherever Garling appears, and whoever he is accompanied with, his melodious voice soars and soothes the soul. Approximately four or five times a year Garling’s concerts at the R & R Restaurant attract many of his long standing fans and his latest performance is no exception to a group of long standing fans. Appearing with Janine Handler whose voice compliments Garling in tone and ambiance, Garling transports his audience to a simpler time and a beautiful place. The type of music is certainly not country, it is cowboy. The type of music is definitely not modern country, it is western. The vocals are not harsh, the themes are not raucous and the chords have no discord. Cowboy western is what we think of with Gene Autry or Roy Rogers, the singing cowboy, yet only Garling could make Frank Sinatra fans this happy!

The evening is soft and the music is romantic. A barbeque buffet is always available when Garling performs at the R & R Restaurant. With a comfortably full tummy the audience can sit back and enjoy as the ears take a little break from the guttural and high decibel level of life in the 21st century. Garling, sometimes just using a simple 3 chord progression on his guitar, accompanies himself with pure vocal tones that fill the room with honesty and purity. Handler has a voice that blends beautifully with Garling’s yet soars alone as well. Keeping time is George Wilkinson on drums whose talent is unmistakable. Joining them this night is Stacy Conley an old and dear friend. Her rendition of “Shenandoah” is incomparable. The music is romantic above all, yet it is the romanticism of the west, the romanticism of the singing cowboy and romanticism that is not found on the radio dial.

When & where is Jim Garling going to appear next? Perhaps it will be with the Sons of the Sage or with the Byron Berline Band. Call the Double Stop Music Hall at 282-6646 or visit www.doublestop.com. For solo appearances or appearances with Janine Handler or the Sons of Sage visit Garling’s website: www.cowboyjimgarling.com. Garling’s April schedule includes Oklahoma City at the downtown library on April 2nd from 11:00am to 4:00pm for the International Festival. Garling will be appearing with Handler and Richard Sharp – the Prairie Drifters! Then on April 23, Beck’s Implements will be hosting their annual Beck Implements Customer Appreciation celebration with Sons of the Sage – Garling with Sharp and Burgess. Beck Implements is located on Highway 33 just east of Guthrie. Exit east instead of west & start slowing down just before noon!

Anyone who loves country music or western music will, of course, love Jim Garling. Those who are not country and/or western fans but love good music will love Garling’s vocals, guitar work and his presentation. Because Garling is not only a musician – he is a story teller and the story he tells is the story filling us with joy and we can never forget.