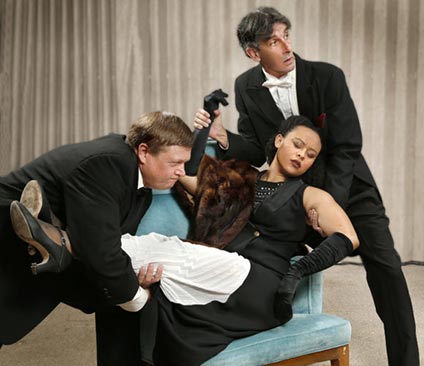 “The Games Afoot” or “Holmes for the Holidays” is Ken Ludwig’s exciting tribute to William Gillette, famous actor and playwright, and of course Sherlock Holmes.  Gillette wrote the very successful “Sherlock Holmes” with Sir Arthur Conan Doyle collaborating.  Gillette also starred in the production giving over 1300 performances in more than 30 years.  That production was a renowned success making Gillette a wealthy man.  As a widower, he installed his mother as his hostess moving into the opulent replica of a medieval mansion which he built on the riverbank near East Haddam, Connecticut.  The Gillette mansion is open to the public to this day.  Christmas Eve of 1936 Gillette invites his fellow cast members to a holiday dinner.  As a surprise he includes the detested theatre critic, Miss Daria Chase to also attend.  “The Games Afoot” is a fictional play about a genuine play based on the success of the fictional series in the Strand magazine….The various adventures of Sherlock Holmes written by Sir Arthur Conan Doyle.

The Jewel Box Production of “The Games Afoot” is directed by Billie Thrash.  Thrash is an extremely gifted director—she is not only competent, but she is creatively thoughtful.  She seems to know when her touch needs to be light, and when it needs to lead.  And in doing so each actor is given structure, but also the freedom to develop his own interpretative nuances.  As a result, each performer in “The Games Afoot” performs beautifully, each able to take advantage of those delightful brief interplays that can occur between people and actors who understand each other.  As a result, each actor gives a memorable performance.  Don Taylor naturally has a Sherlock Holmes aura about him, and becomes the ideal Holmes as Gillette believed himself to be.  Taylor has an impressive resume and has performed admirably in several venues in a number of roles yet his performance as William Gillette has to be among the top characters he has created.  One slightly arched eyebrow dances with perfect tempo and we are hooked.  In Ludwig’s play, Gillette, widower and man about town, has his mother Martha as hostess of the Gillette mansion with all of the latest technological advances of 1936.  Elizabeth Garrison plays a much older woman with exceptional grace giving us a glimpse into the slightly dotty but lovable, proper yet unconventional and quite cordial lady of the house. A single pouty eyebrow from her and Gillette, in an avuncular fashion, obeys.

Gillette has invited his costar and dear friend Felix Geisel to the party. He and his wife delightfully banter back and forth as the party gets underway.  Tad Thurston has been seen in a number of plays throughout OKC, and in “The Games Afoot” he shines.  He has delightful moments of innuendo, camaraderie, and genuine attachment with each character and is believable as well as funny.  Alongside him wife, Madge Geisel is played expertly by Amandanell Bold.  She creates a modern woman who is also a beloved wife.  Mrs. Geisel is sure of herself and her own intelligence and can hold her own with him at every turn.  Though the loving wife she is not immune to jealousy.  They are wonderfully paired.

Then there is the sweet young thing, Aggie Wheeler.  She is the leading lady in “Sherlock Holmes” and has a delightful rapport with her leading man William Gillette.  She also has a wonderful rapport with her escort, Simon Bright.  Karen Garlitz is a lovely leading lady, perfect for the role of Aggie Wheeler.  She is sweet and saucy, and one might detect a certain snippet of deviltry in her makeup.  Justice Wickstrom is Simon Bright, the young man who has recently outgrown the status of juvenile lead.  Wickstrom does a great deal of justice to the role. It is easy to see why Aggie Wheeler might fall in love with Simon Bright.  They have their own special chemistry which can somehow become an oddly amusing mix with other characters in “The Games Afoot.”

Mariah Warren gives an amazing gloss to her interpretation of the witty Daria Chase.  Warren understands the power she wields as a theatre critic in the days when theatre criticism truly mattered.  She combines the wit of Dorothy Parker with the duplicity of Morgan le Fey, nemesis to Arthur.  She understands the power of the pen a on a very basic level.  Like many of her ilk it never occurs to her to consider her victims as her fingers fling poison over her typewriter keys.  Warren makes her wide eyes uproariously funny in her feigned innocence and her tongue amusingly admirable in her depravity.

In “The Games Afoot” there is a murder—it’s not too hard to guess who gets knifed in the back—and the remaining guests realize that someone in that room must be guilty.  It is the’ who done the dirty deed’ that tells the story isn’t it?  Gillette believes that he, with all of his Sherlockian ability is the only man to solve the crime, however someone has let the cat out of the bag and called for a cab and the police.  Enter Inspector Goring.  In spite of Gillette’s superior detection abilities he must bow to her position.  Chris Harris is Inspector Goring.  Harris is absolutely 100% the perfect Inspector Goring.  She is an accomplished actress and can play any role with integrity.  She makes herself the definitive officious and slightly silly but, oh so wise country constable.  Harris is the ideal policeman for Sherlock Holmes, the creation of Sir Arthur Conan Doyle as well as Ken Ludlum.

The Gillette Castle is a magnificently appointed structure and the technical crew has put together a masterfully opulent set.  David Hester is the Technical Director of the Jewel Box Theatre and Ben Hall is well known as an excellent set designer.  The beautifully appointed set reflects their skill and artistic designs.  Christine Jolly is Stage Manager as well as handling properties for the Jewel Box.  The props for “The Games Afoot” are authentic, enhancing the mood.  Scott Hynes is a lighting designer second to none and Emily Herrera’s costumes look as beautiful as the stars under the lights.  Billie Thrash is a very competent director, and with the assistance of Denise Hughes “The Games Afoot” is an extremely smooth show.  Richard Howells as set builder and Josie Walley on the crew help to make the wonderful comedy work precisely.  It is no wonder that the performers are providing such even characterizations; each scene is so visually inspirational.  The complicated sound effects are a compliment to Jolly’s expertise.

Three writers have joined together throughout the past century and a half to first create, and then recreate the magic of a Sherlock Holmes mystery a little love here, a little comedy there.  They are Sir Arthur Conan Doyle, William Gillette and Ken Ludwig. Director, Billie Thrash has reached across time understanding with unerring accuracy Sir Arthur Conan Doyle and William Gillette, and Ken Ludwig.  Most of all Thrash communicates her appreciation of Sherlock Holmes. She infects the audience through her cast with that same appreciation.  Furthermore, the entire cast displays absolutely perfect comedic timing throughout the show, a feat as rare as perfect pitch.

“The Games Afoot” plays November 15 through December 9 at 8:00 pm and 2:00 pm on Sunday matinees. The Jewel Box Theatre is located at 3700 N. Walker just north of the Church Under the Dome.  For tickets and information visit www.jewelboxtheatre.org or call the box office Tuesday through Friday from 1:00 pm to 6:00 pm. The Jewel Box theatre telephone number is 405-521-1786.  “The Games Afoot” or “Holmes for the Holidays” is a great comedy for all ages who love to laugh!