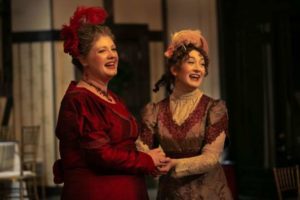 Jane Austen loved to write and she wrote well, publishing her novels anonymously and gaining a measure of respect.  She wrote about life as she knew it and the importance of attending the right balls and garden parties.  She gave us a glimpse of what behavioral ‘dance’ young couples had to perform in attempting to find a place in their future.  Her novels are beloved by many, and although women today have fewer difficulties in creating a future, everyone still dances a courtship.  Erin Woods is clearly a fan of Jane Austen, and an actress of some note as well as a writer of excellence.  Her play “Jane Austen’s Christmas Cracker” is an interactive piece directed by Tyler Woods and performed at Shakespeare on the Paseo through December 21, 2019. 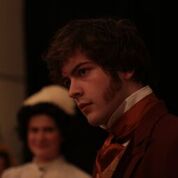 Jane and Cassandra Austen are hosting an imaginary Christmas Ball with the characters from Jane Austen’s most popular novel, Pride and Prejudice, in attendance.  Under the hostesses’ watchful eye, two guests take umbrage with one another, Mr. Fitzwilliam Darcy, Esquire and Miss Elizabeth Bennet. It’s a well-known fact that the first sign of falling in love reveals itself as an intense dislike.  The other guests take it in stride, but the audience soon realizes that a novelist is watching two of her fictional characters at their birth.  It’s an enjoyably awkward moment and fascinating encounters are soon distracted by carols of old, with favorites such as “Good King Wenceslas” and “God Rest Ye Merry Gentlemen” among them.  Throughout the evening other love affairs begin to blossom and other moments of intrigue occur, including 19th century mean girls like Miss Caroline Bingley who seeks the attention of Mr. Darcy.  These events are alternated with dances, games and carols.  It is in fact, a ball; a party to enjoy and the revelers do so with enthusiasm.

The stars of the show are certainly Jane and Cassandra Austen.  Jane Austen is played delightfully by Jodianne Loyd, debuting with Oklahoma Shakespeare on Paseo.  Miss Cassandra Austen is played by seasoned metro performer Lindsey Rollins, utilizing her excellent vocal skills in both song and speech.  The two are clearly loving sisters taking the idiosyncrasies of the guests in stride as they gracefully welcoming everyone to their ball. 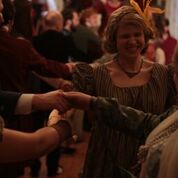 Miss Elizabeth Bennet and her vivacious younger sister Miss Lydia Bennet attend.  Lydia is a bit silly, in fact giddy, perhaps a little young for such a party.  Her giggles are infectious and she is played artfully by Kristen Küns.  Elizabeth, “Eliza” to her family, is elegantly played by Jessa Schinske.  Both of these girls suffer the indignities of their mother’s fluttering as she oversees every action.   The overly doting and ever watchful mother that is Mrs. Bennet is wonderfully played by Zaneen Fletcher-Hall.  A veteran actress in her native England and Oklahoma City for the past six years, Fletcher-Hall is making her debut with Oklahoma Shakespeare in the Park.  Fletcher-Hall is superb and gracious. She makes an admirably doting mother for poor Elizabeth and Lydia to suffer under and she provides a great deal of atmosphere for the pen of Jane Austen.  These five actresses are the core of the show and make “Jane Austen’s Christmas Cracker” a rousing success for all.

Nick Hone has the role of Mr. Fitzwilliam Darcy, handsome and certainly a catch! Darcy is wealthy, prideful and not always kind to those of inferior status.  He is beginning to grow up, and at this ball he unbends, but perhaps vestiges of his arrogant superiority are retained.  Hone is the perfect actor for the role–handsome, aloof and dignified, keeping his kind soul in check.  He is escorting Miss Caroline Bingley, the ‘mean girl’ of her era.  Mariah Warren is excellent as Miss Bingley, able to cast derisive and divisive glances along with her undisguised barbs.  Her machinations are not rewarded, and all guests are secretly delighted.

Miss Emma Woodhouse is delightfully played by Sara Massoudi, a young woman of refinement.  Another guest is Miss Catherine Morland, also a genteel young woman searching for the right attachment.  She is played with great gentility by Callie Dewees.  There are several gentlemen for them to compete for and these young men are also seeking a companion that will enhance their prestige.  Unfortunately, the heart does not always follow the course set by the ‘best’ minds of the period.  Mr. George Knightley, Mr. Henry Tilney and the Rev. Mr. Philip Elton are all eager to impress a young lady.  Matthew Moreillon plays Mr. Knightley handsomely and Rody Farrow is the Rev. Elton, slightly ill at ease.  Riley Helton is Mr. Tilney, an easy conversationalist.  As the actors relate to one another, tempers are frayed and feelings are hurt. Tantrums erupt, but are quickly contained as such behavior would be unladylike.  But there is always a ‘guest’ to dance with as an escape into their fantasy rather than ours. 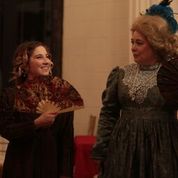 The simple dances are executed twice, first with instructions from Cassandra much like a square dance caller, and then the dancing takes place.  Guests are always partnered with someone who knows the dance and whispers the next move as the dance progresses.  It is not unlikely to find a member of Scissortail Traditional Dance Society attending as well.  This dance company, based in Edmond, Oklahoma specializes in Traditional Dances from European and American roots.  Among them are the dances that were so important in Jane Austen’s time.  They are a welcome addition, effortlessly assisting the ‘guests’ who have never danced before.

The musicians are a large part of the event.  While Elizabeth Bennet takes a turn at the pianoforte, the pianist is usually Grace Helton.  Aaron Bushong is on the violin as is Nicci Ciardi.  They are impressive as musicians providing the dance music of the period.  Also appearing in great demand and assistance are Daryl Jones as the Butler, Reily Preston as Head Housekeeper and Elizabeth Grimes as the House Maid.  There are occasions when they must not only act their part, but have to deal with an actual disaster should a guest mishandle a glass of punch.  With surreptitious access to the modern paper towel a crisis is averted!  Outside of the discreet modern assistance, the characters are maintained gracefully by the servants, musicians, and guests in any situation. 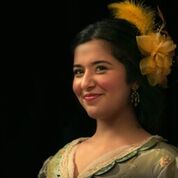 While the cast know their lines and the guests do not, there are many opportunities for those not dancing to engage in conversation with guests.  There is no telling what a guest might have to say, and the cast are all excellent ad libbers.  This is an opportunity for guests to shine, stepping outside of the normal bounds of an audience in participating.  While a ball of the period usually did not have children attending, this occasion had three extremely well behaved children who comported themselves with great harmony and dignity.

Among them, Brenna McDonnell stands out at only 8 years old.  She dances with grace, and wins the game of Musical Chairs handily; curtseying with deference and delighting all the cast and guests with her own uninhibited and courteous delight.

Your program is your ticket and your caroling assistant for any forgotten verses.  This show is so much fun to attend, guests are never out of place, the action is amusing as well as romantic and the chance to show off a little bit is quite fun. 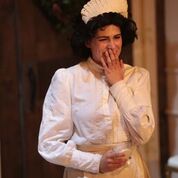 Tyler Woods does a thoughtful job in directing the talented cast to maintain their characters while dealing with the unexpected.  As a result “Jane Austen’s Christmas Cracker’ has never a dull moment, and the awkward moments are all within the cast, guests are made to feel welcome and at home.  Visit www.okshakes.org or call the box office at 405-235-4700.  Jane Austen’s Christmas Cracker” plays December 5 through December 21, 2019.  Curtain is 8:00pm with a 2:00 pm matinee on Sunday, December 15, 2019.   ‘And God Send you a Happy New Year!’