It’s Chilly Outside, but “The Heat is On in Saigon” 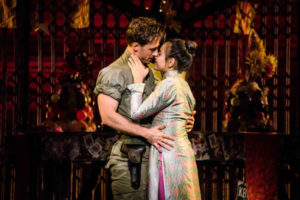 Emily Bautista as Kim and Anthony Festa as Chris in the North American Tour of Miss Saigon singing “Last Night of the World.” Photo by Matthew Murphy.

Miss Saigon is based on the opera Madama Butterfly and tells the story of a young Vietnamese woman named Kim, orphaned by war and forced to work in a bar by the infamous and slimy Engineer. On her first night, she meets and falls in love with an American G. I. named Chris, but sadly they are torn apart by the fall of Saigon. For three years, Kim must survive any way she can, dreaming and searching for a way back to Chris. Miss Saigon features a beautiful score with Broadway hits such as “The Heat is On in Saigon,” “The Movie in My Mind,” “Last Night of the World,” and “American Dream.”

Miss Saigon originally opened on Broadway almost 30 years ago and gave household name Lea Salonga her Broadway debut. The show was recently revived in London in 2014, with a Broadway transfer in 2017, starring Tony nominee Eva Noblezada as Kim.

I had the immense pleasure of seeing the national tour of this production at the Civic Center in Oklahoma City on January 15. This musical is nothing short of a spectacular piece of theatre. Featuring a strong and diverse cast of 42, they deliver a performance full of depth and heart.

Emily Bautista gives a gorgeous and heartbreaking performance as Kim. Her voice soars over the audience, simultaneously warming and breaking hearts in “Sun and Moon” (expertly matched with Anthony Festa as Chris), “I Still Believe” (with Ellie Fishman as Ellen), and “I’d Give My Life for You.” Bautista’s Kim is the perfect balance of young and old, sweet and strong. Festa performs as Chris with passion, showing the confliction and confusion as he belts “Why God Why.” Singing “The Movie in My Mind,” is Christine Bunuan as Gigi. Bunuan’s performance is full of dejection and resentment for not being able to escape to America with a G. I. to start a better life. Her voice is simply stunning. J. Daughtry plays John, Chris’s fellow marine, with a remarkably empathetic energy, especially during his near show stopping performance of “Bui Doi.” Jinwoo Jung is a powerful Thuy, a man betrothed to Kim, giving an honest and intimidating performance from start to finish. Fishman’s Ellen is warm and heartfelt, which I appreciate. Ellen can be perceived as cold to the inexperienced actress, but Fishman is nothing short of loving and kind. 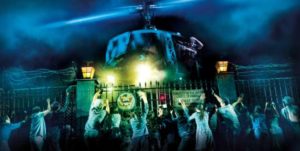 The helicopter lands in “The Nightmare” in Miss Saigon. Photo by Matthew Murphy and Johan Persson.

But what would Miss Saigon be without the Engineer? Red Concepción is absolutely brilliant. His comedic timing, paired with impressive vocal chops, makes for a performance you can’t take your eyes off of. His energy seems boundless as he runs around stage for nearly three hours straight. Concepción captivates with the eleven o’clock number “American Dream,” singing with delight (and sexual arousal??) about what his life would be like if he were in America. His energy is infectious, making me forget how long the show is.

Just like Les Miserables has the barricade, and Phantom of the Opera has the chandelier, Miss Saigon has an iconic spectacle piece in the helicopter. You know what I’m talking about. THE helicopter. It can be presented in numerous ways: genie lifts, projections, lights on a bar (which is flown in from the rafters), etc. The helicopter in this production is wildly realistic. It really looks like a real helicopter on that stage, I have goose bumps just thinking about it. 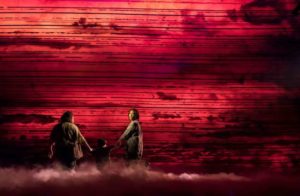 (From L) Red Concepción as The Engineer, Jace Chen as Tam and Emily Bautista as Kim in the North American Tour of Miss Saigon. Photo by Matthew Murphy.

While the performances are breathtaking, I still felt there is something to be desired in the material itself. Don’t get me wrong, the music is gorgeous and I am so happy the show gives opportunities to Asian and Asian-American actors, who deserve more representation in the arts; however, the “white savior” trope is a little tired. At one point, Chris exclaims “Jesus Christ, I’m American, how could I do wrong?” That line always makes me uncomfortable. The Engineer is written as slimy and money grubbing, a terrible stereotype that needs to end. I wish Asian actors would get more opportunities than this big show; little kids deserve to see people who look like them in roles that aren’t prostitutes or sleaze-balls. I hope someday, we can see more stories about Asian people, not just stories of the Vietnam War from the point of view of the dashing, white, American soldier. We, as artists, need to do better.

Miss Saigon runs January 14-19 at The Civic Center Music Hall. There are a limited number of $26 tickets available two hours prior to students, educators, active military, seniors, and first responders (with valid ID). Tickets can be purchased online at OKCBroadway.com, by calling (405) 594-8300, or in person at the Civic Center Box Office.

** Hannah Finnegan is an OK Art Scene and Hurd Contributor.**