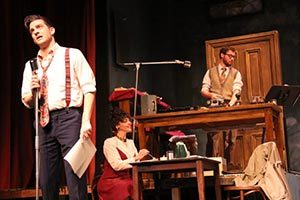 Christmas is a busy time for theatres. Everyone seems to get into a Dickens-y spirit this time of year, with ghosts and Humbugs in every theatrical production you can find. A welcome break from tired traditions is It’s A Wonderful Life: A Live Radio Play. This production heralds back to the days of yesteryear, before iPads and streaming services flooded our airwaves, and brainwaves, at a constant, break-neck pace. Radio plays featured casts reading scripts over the air, breaking for commercials and using their diverse voice skills to play several characters each. Foley artistry provided the sound effects, and a fully produced play could enter homes on a nightly basis. The art form reached peak popularity in the 1930s to 1960s, before disappearing almost entirely in the U.S.

The Pollard Theatre Company in Guthrie revives it for their production of It’s a Wonderful Life, the radio and stage version of the famous black and white movie from 1946 that starred Jimmy Stewart and Donna Reed. Joe Landry’s adaptation provides a full color experience for patrons. The theatre audience becomes the studio audience as the cast, set to voice the famous characters, enters from the back of the house.

David Fletcher-Hall is William Buckingham/Clarence the Angel. Clarence is sent to George Bailey on Christmas Eve to prevent him from committing suicide. On the brink of financial ruin, George is desperate and sees himself as more valuable dead than alive. Clarence gives George a glimpse into what life would be like, and how his hometown of Bedford Falls would suffer, if George had never been born. Fletcher-Hall is delightful in this role. A kind-hearted and compassionate angel, he helps George see the importance of valuing himself and all the things worth being thankful for in his “wonderful life”. 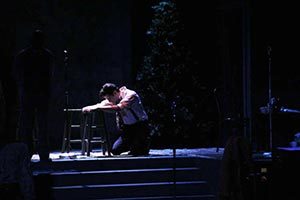 Longtime Pollard favorite Joshua McGowen reprises his role as Jake Laurents/George Bailey. He’s demure and flirtatious as Jake, winking at audience members and reviewers alike on his way to the stage. McGowen as Laurents is unassuming, surely not to be affected at all by the story he’s about to read over the air. But then he becomes George Bailey. Let’s not mince words here. This. Is. McGowen’s. Role. Those who’ve watched McGowen essentially grow up on the Pollard stage have seen the emotional depth and heart he puts into every performance. This role still tops them all. McGowen shows a range of emotions, from overjoyed, downtrodden, sly, sneaky, and proud, to frantic, even desperate. His revelations about the life he wants to throw away on Christmas Eve are intense and moving. McGowen’s abilities as an actor and the quality of his talent are never better than as George Bailey. He has a similar drawl and old-timey dapper look that’s reminiscent of Jimmy Stewart. But this role is wholly his, and he’s a heart-melting leading man. Even critics who’ve “seen it all” shed tears. 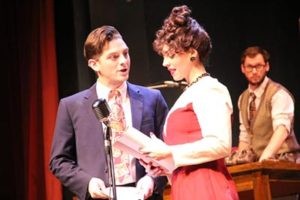 An actor is only as strong as his scene partner, and there’s no better match for McGowen’s performance than Kara Chapman as Sally Applewhite/Mary Hatch. Chapman as Sally is glamorous, a radio actress who charms and entertains the audience. She’s innocent and wide-eyed as Mary Hatch, but she knows what she wants in life. Chapman is so captivating, she immediately has the whole audience in love with her. When George Bailey offers to lasso the moon for her, it’s easy to see why. Chapman and McGowen have great chemistry with each other. When troubles arrive, they’re in the thick of it together. Chapman feels and reflects McGowen’s pain, and carries it in her own way. The scene in which George Bailey’s own wife doesn’t recognize him is heartbreaking, a turning point in the play and a gripping moment of emotion for both actors. Chapman proves herself the real heroine of the tale, demonstrating with finality that if men would just listen to the women in their lives, their troubles would be lessened definitively.

Kris Schinske Wolfe is Lana Sherwood. She also plays several other roles, including Violet Bick and George Bailey’s mother. Wolfe is distinct in each role, and she stands out delightfully as Violet. She’s a dynamic actress with a strong presence on stage. As Violet she suffers the most from George’s absence. Schinske Wolfe is multi-faceted and brings a unique persona to each character.

Timothy Stewart is Harry Heywood, Uncle Billy, and Harry Bailey, brother to George. Stewart is energetic and jovial, bouncing from one microphone stand to another as he switches back and forth from character to character. He plays so many roles, it would be hard to keep up with who is whom, except for the many voices Stewart employs to distinguish them. Stewart is capable and spirited, as fun to watch as he is to listen to.

James A. Hughes is Freddie Filmore/Henry Potter. Mr. Potter is a true villain, out to get the Bailey family, and opportunistic to a fault. Hughes is sinister, sly and vile as Potter. Hughes is otherwise genuinely likeable, with a lovely smile and a smooth voice in both roles in the show. He plays up the drama and devilishness to a fine degree as Potter, making him appropriately snakelike.

The main characters are portrayed as children early on in the show, and the same actors appear again as the children of adult Mary and George. The young talents on display here are Jackson Daigle as Young George/Tommy, Kodi Hare as Young Harry/Pete, Rianna Stottemyre as Young Mary in a role reprisal from last season, Irah Strader as Young Violet/Janie, and Molly Mosman as Zuzu. They’re a dazzling bunch of young artists with poise and professionalism to spare! Director W. Jerome Stevenson has honed their blossoming skills well and the audience is in for a treat watching them shine. They’re sure to delight audiences in future productions for years to come.

Jared Blount provides sound effects as the Foley Artist. Foley artistry is rarely seen on stage. It utilizes common items to create the sounds heard throughout the show, and everything from a comb, to a set of keys in a glass jar, and even a door opening and shutting are used to create the world of the play. It’s so interesting to watch, and even better, to close your eyes and listen to. That is, after all, what radio plays are for- listening and imagining the story. 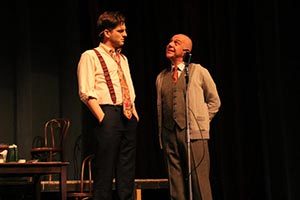 The Pollard has created a new, welcome tradition to the holiday festivities in downtown Guthrie. It’s A Wonderful Life: A Live Radio Play is a breath of fresh air and a break from other over-produced Christmas stories. The trials of George Bailey are familiar and represent classic American cinema nostalgia. The most famous lines from the movie remain in the play, and the story serves as a beautiful reminder of just how precious and pivotal every life is. There’s no better time to remind ourselves and our loved ones of that than at Christmas. This production, like its name, truly is wonderful.

It’s A Wonderful Life: A Live Radio Play runs until December 22nd at the historic Pollard Theatre in Downtown Guthrie, 120 W. Harrison Ave. For tickets, visit the website at thepollard.org or call the box office at 405-282-2800.