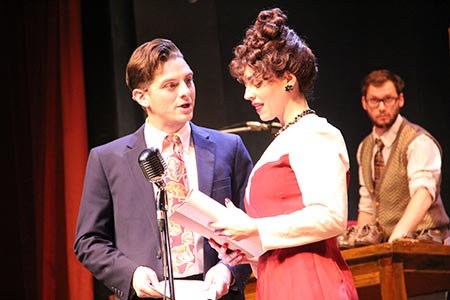 The brightest age of entertainment may well have been in the days of radio, with great shows, like “The Shadow” and “Topper,” all full of wit, humor and the listener’s imagination.  Each show had a sound effects man to recreate the sounds seen during the live presentation.  Jack Donovan Foley refined many of these sounds and they are used extensively in Joe Landry’s “It’s a Wonderful Life: A Live Radio Play” directed by W. Jerome Stevenson at The Pollard.  The Foley Artist is Jared Blount and he executes these sounds using common household items, sometimes in very unusual ways.  Timothy Stewart is the Properties Master who painstakingly acquires these items.

“It’s a Wonderful Life:  A Live Radio Play” was inspired by Frank Capra’s 1946 movie starring James Stewart, Donna Reed and Lionel Barrymore. In the stage version done as a radio play from the era of the movie Joe Landry adapts the story based on Philip Van Doren Stern’s ‘The Greatest Gift’ from 1939.  Landry’s delightful new radio play premiered in 1996 and has become a Christmas classic for the theatre, just as the movie is a Christmas season favorite.

The audience is captivated as the play begins.  The group of actors performing in “It’s a Wonderful Life” also do the commercials, and are part of a radio company of performers.  The actors portrayed are the actors who star in “It’s A Wonderful Life: A Live Radio Play” and they are distinctly different from the characters living in Bedford Falls in the mid-20th century.  The audience is also treated to the wonderful activities of Blount, The Foley Artist, creating a myriad of sounds that make the play realistic and vibrant.  As the play progresses, the performers gradually immerse us in the characters living in Bedford Falls: George Bailey, his wife, Mary, children and Uncle Billy.  George Bailey runs the Bailey Savings and Loan and has, since his father’s death, given up his dreams of college and travel, and instead revels in the love of wife and children while keeping the family business alive.

Through it all are the small sounds of life, unnoticeable yet they are often the punchlines of life-the door slam, the window breaking, the fork scraping against the plate, the crunch of snowy footprints and the bell signifying that an angel has earned his wings.  Stewart gathered the props and Blount plays them, with a little help from actress Sally Applewhite who makes an empty fork on an empty plate sound like mashed potatoes and gravy.  She does this with an air of slight superiority as an actress confident in her ability yet willing and able to assist as needed.  Then Sally Applewhite becomes Mary, a sweet young girl in Act 1 and a savvy but generous matron in Act 2.  Is it any wonder that this leading lady is played by an actress of such ability as Kara Chapman?  Actor Jake Laurents is debonair, handsome and clearly a popular fellow particularly among the ladies.  As George Bailey he is thoughtful, kind, and dedicated and a beloved fellow among his customers at Bailey Savings and Loan.  Both men are good men but completely different types of men.  George Bailey is an interesting part of Jake Laurents.  Joshua McGowen is the actor who can display the charm of Laurents with unfailing accuracy and follow that with revealing the kindness of Bailey with equally perfect targeting.  It is a great deal of fun to watch Chapman and McGowen two transition from actors into characters. 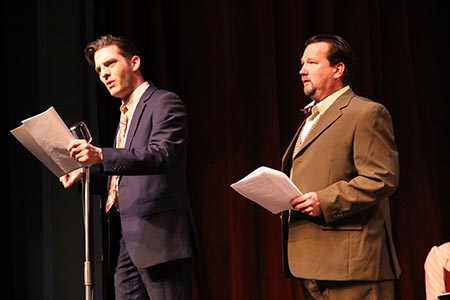 Joshua McGowen as Jake Laurents and Timothy Stewart as Harry Heywood-Uncle and Nephew holding the Bailey Savings and Loan together. Photo courtesy of Jared Blount, and The Pollard

Even more visual fun arises from the transformations required of James A. Hughes, Timothy Stewart, and Kris Schinske Wolf. Hughes is Freddie Filmore, the announcer, and he plays several other vital characters.  Stewart is Harry Heywood playing a host of other residents of Bedford Falls, the small town where a miracle is about to take place.  Wolf is the vivacious noted character actress Lana Sherwood who plays numerous women, including George’s mother, Mary’s mother, Violet all grown up and adventurous, and a Violet growing up with too many adventures.

These three characters have extremely rapid physical transitions, playing a multitude of characters who don’t always agree with each other.  Hughes is a very calm and controlled announcer, Freddie Filmore, alternating the emotionless tone of commercialism with false enthusiasm expertly. Then suddenly he is the evil Mr. Potter, and then the next moment he is the poor pharmacist the young George Bailey saves.  Stewart is Harry Heywood playing the taxi driver for Bedford Falls residents who knows everyone like a dear friend and the Italian client with a big family and a pot of spaghetti on the stove, both active and kindly men, and then he is also Uncle Billy, afraid of his own shadow, sweet but bumbling and totally dependent on his nephew.  With unsurpassable skill, Wolf is very sophisticated as Lana Sherwood playing numerous characters, two interesting versions of Violet and three completely different but very loving mothers-the encouraging mother of George, the over-protective mother of Mary and briefly the slightly querulous mother of Violet.

From heaven above (upstage) Clarence Odbody is watching the life of George Bailey unfold.  Veteran British actor William Buckingham awaits his moment puffing upon his pipe before appearing as Clarence the second-class angel anxiously wishing to earn his wings.  That actor is David Fletcher-Hall, also a veteran British actor.  He plays Clarence with the unfolding fear of failure–what if he doesn’t earn his wings, and even worse, what if George Bailey cannot be helped?  Much is riding on his ability to help the distressed George Bailey, yet he holds on to his humor and loving nature.  His inspiration to use the best attributes of Bailey to save himself comes in a brilliant flash of wisdom, unknowingly accumulated over years of heavenly observation, but with an actor’s superb calculation and timing.

The 21st century grapples with the acts of greedy and evil men, life hasn’t gotten better in the past century, but the answer that comes to us all is that truth, honor, generosity and common-sense kindly values will ultimately prevail.  These actors demonstrate that with their performances, but none more so than the children.

There are five children playing various parts, from George Bailey and his friends in the early 20th century to the children of George Bailey a generation later.  They remain poised ‘back stage’ providing vocals for the commercials, and then step in with different characters with skill and warmth.  Jackson Daigle is the young George; he is a rather adorable young George, already developing a moral compass, but still a little boy.  One can see already the fine man he will become.  Kodi Hare is the younger Harry and also Pete, distinct characters yet part of the crowd.  The young Mary with her little girl crush on George is played beautifully by Rianna Stottemyre.  Molly Mosman very sweetly pulls the heartstrings of the audience and her father as Zuzu, the youngest daughter.  A new addition to the cast is Irah Strader, first as the young Violet foreshadowing both scenarios.  Then as Janie, the elder daughter, one can see her mother’s strength.  Strader and Stottemyre both have a gentle element in their constitutions that we see in Kara Chapman’s characterization of Mary; one we don’t see when Sally Applewhite is voicing a commercial.  When children do such a marvelous job of setting up the adults great talent is revealed, as is marvelous directing by Stevenson.

“It’s a Wonderful Life: A Live Radio Play” is somewhat complicated to explain yet so simple to watch.  It is the magic of theatre and the magic of the 20th century, the greatest generation and mom and dad.  But it is also the magic provided by Stef Fortney stage manager, along with deck crew members Hilary Winkelman and Jole Schrimsher.  Without their hard work backstage the show would not be so smooth.  The production team from costumes by Michael James and scene design and creation by the same Michael James and James Hughes and sound by Jared Blount along with the incredible properties by Timothy Stewart make the show able to capture our imaginations and our hearts. 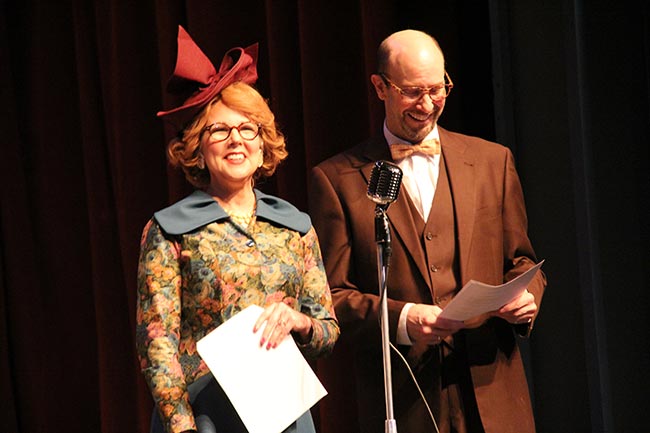 Kris Schinske Wolf as Lana Sherwood and James A Hughes charming in “It’s a Wonderful Life: A Live Radio Play” Photo Courtesy of Jared Blount and The Pollard

As we return to our own homes, our own troubles, our own attempts to conquer evil we hear the small sounds of everyday life and remember that perhaps there is an angel, a guardian angel watching over us.  Not everyone believes that, but after seeing “It’s a Wonderful Life: A Live Radio Play”  we can definitively tell that at least there is a Foley Artist standing stage right ready to break a glass without a single shard.

“It’s a Wonderful Life: A Live Radio Play” is being presented November 29 through December 22 at the Pollard Theatre amid the Christmas lights of historic downtown Guthrie.  The address is 120 W. Harrison just under a block west of Division Street also known as the main drag.  Come early and catch the displays or visit The Jungle directly across the street for a glass of wine, or for dinner as one cannot go wrong at Stacy’s just down from the Jungle.  Between them stop and gaze in the window at Utopia Joe’s Steampunk art and the Tipsy Artist merrymaking.  For tickets and information visit www.thepollard.org or call the box office Tuesday through Friday at 405-282-2800.