Intellectual Amusement at 3rd Act Theatre in “The Shakespeare Conspiracy” 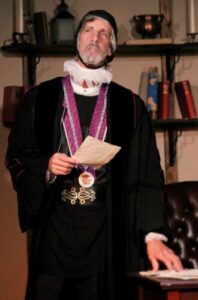 Conspiracy Theories abound due to uncertainties and vulnerabilities but also in a sense of fun.  “The Shakespeare Conspiracy”, is a play by Ted Bacino and Rufus Cadigan and based on Bacino’s 2010 novel of the same name.  And it is fun, yet based on logical possibilities of the many conflicting rumors as well as those facts as we know them to be.  There have been numerous speculations over the years about the impact and rapid development of Shakespeare the playwright and this novel contributes a great deal to the possibility such a fraud could have occurred, and how hilarious it could be.

Christopher Marlowe was England’s premiere playwright during the Elizabethan Age, but his early death put his career to a full stop.  He died in a knife fight quite before his time.  Little is known about his life, but many claims and rumors abound.  “The Shakespeare Conspiracy” examines the premise the Marlowe was not murdered, but faked his death to avoid being executed as a spy.  The possibility that Willie Shakespeare was a bit actor recruited to perform as the author of the great works of Kit Marlowe, the greatest playwright of the age, is an intriguing. Ted Bacino took advantage of many possibilities in his novel.  The play by Bacino and Rufus Cadigan creates an interesting alternative reality and the result is a humorous romp through an Elizabethan England full of suspicion as well as a great deal of gaiety. 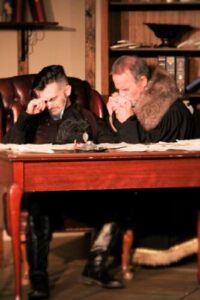 Kris Kuss directs “The Shakespeare Conspiracy” with an excellent cast.  Christopher Marlowe is portrayed by Dakota Lee Bryant.  We see in his excellent interpretation that Marlowe’s personality was a flame that burned too brightly in more than ways than one.  Sir Thomas Walsingham (cousin to spymaster, Francis) is Marlowe’s patron, lover and protector.  Rob May brings a very interesting character to full fruition in his intelligent interpretation of Sir Thomas.  Keegan Zimmerman distinctly plays several roles including most notably, the bumbling Will Shakespeare and Thomas Kyd.  Don Taylor is the spymaster himself, Sir Francis Walsingham with that menacing demeanor that enabled his great success as Elizabeth’s greatest asset in intelligence.  David Patterson plays Constable Henry Maunder with great skill.  It is this character that ties the threads together in the tangled web so many lies weaved.  Jonah Muscarella plays both Lord Henry Wriothesley and Nicholas Skeres, two vital characters that are only known to dedicated historians.  These six cast members are well suited to the characters and played without gullibility that encompasses historical possibilities and improbabilities skillfully. 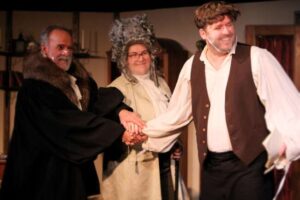 Rob May as Sir Thomas Walsingham and Jonah Muscarella as Sir Henry Wriothesley and Keegan Zimmerman as Will Shakespeare plot. Photo courtesy of April Porterfield

In considering the success of any production it is helpful to consider what the author would have thought of the presentation.  On opening night Rufus Cadigan was beaming in the audience so, it is clear that the show was directed according to his expectations. The show is quite an enjoyable performance for the audience.  All of the cast members are true to the written word and that is always a boon to any production.

Kuss’s able direction is enhanced by Kate Adams Stage Management as well as the support in the community for the excellent efforts of 3rd Act Theatre.  Set and costumes are very good except for the modern eyeglasses on Muscarella.  The venue is located in The Shoppes at NorthPark Mall at 12040 N. May Avenue in Oklahoma City.  For information contact info@3rdacttheatreco.com or call 405-593-8093.  “The Shakespeare Conspiracy” runs March 4 through March 20, 2022 with weekend evening performances at 8:00 pm and Sunday Matinee’s at 2:30.