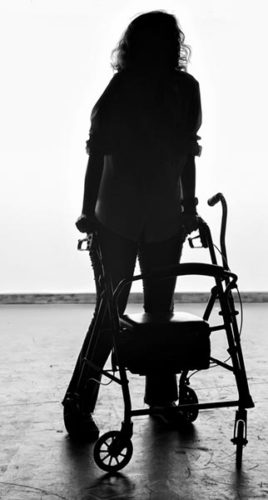 The show took place at the intimate CitySpace location in the Oklahoma City Civic Center Hall in downtown Oklahoma City.  It is due to the imagination and foresight of Jordan and CityRep that important events such as this are given a venue.

Thanks to CityRep and the OCU school of Theatre for their artistic leadership in working with Risk Theater Initiative and Marianne Galloway to bring Sherry Jo Wards inspiring and imaginative performance to the public. 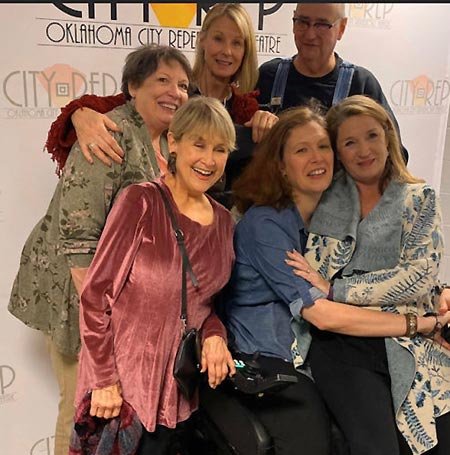 “Stiff” is a one-woman autobiographical show written and performed by Sherry Jo Ward.  Ward is an actress and playwright who has been very active in the Dallas/Fort Worth Theatre scene for a number of years.  In addition to being active in theatre, Ward has been married to a fellow actor for nearly 20 years and has two very expressive, active boys.  Folks outside of theatre do not always understand what happens on stage, and, as a result get the sequence backwards.  In performance one tells a story that is not real.  Many equate that with lying.  Even in non-fiction or historical plays there is allowance for “dramatic license.”   But, in fact, theatre provides a revelation of the truth—a larger truth—and that is what makes it powerful.  Ward’s play is autobiographical.  It is based on real events that are on-going in Sherry Ward’s life.  And still, it presents a larger truth: a truth bigger than Ward, and bigger than any one member of the audience.  While what she speaks of is something very personal and rare, her emotions, and those she evokes are universal.  That she speaks with such clarity, humor and responsibility is what makes her play “Stiff” unique, valuable, and moving.  We are told that Mahatma Gandhi said “Even God can speak to a hungry man only in terms of food.”   That also applies to pain.  And even God can speak with someone in pain only in terms of its relief.  (Which leads to another quote so basic it is impossible to identify the original author:  “Laughter is the best medicine.”) 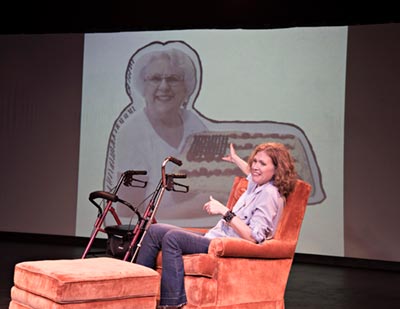 It seems quite arrogant to equate my pain to that of someone else who has a truly serious condition because pain is subjective. Yet I must, for how else can you evaluate the brilliance of Ms. Ward’s play?  At least my understanding of pain allows an appreciation of another’s, despite its severity.  And, some things are universal.  Sometimes I just can’t stand the pain.  Never-ending agony demands my undivided attention.  I can’t forget it for a moment; it colors every aspect of my life, my dreams.  It “spikes” from barely bearable to unbearable.  Then it ratchets up another notch.   It hurts.  Medication takes the edge off.  Marijuana takes the edge off but adds another that is softer.  Meditation doesn’t work well.  “Don’t think about it,” others tell me. “Don’t give in to it.”  “Don’t let it control you.”  “No! I say.  Give in to the pain.  Let it control you.  Let it take over every fiber of your being, your thoughts and your life.”  If you go ahead and do that you find that in spite of everything sooner or later you still have to scratch.  That brings it down to a more manageable level.  For an instant.

The doctor pats you on the head and says (like he understands) ‘It’s okay.  It’s going to get better.”  It’s not.  Not ever going to get better.  It can only get worse.  And when the pain returns to the unbearable–chronic normal, he says, “Just think what it would be like if your muscles never relaxed?  What if you stayed like that?”  Looking at him with eyes he thinks are filled with pain, but are actually filled with hate, you say:  “Could that happen?”  He says, “Not to you.” 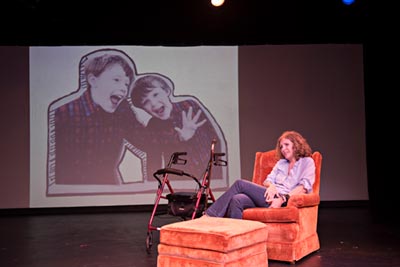 Then you see Sherry Ward, actress, playwright, daughter-in-law, wife, and mother.  She experiences everything you experience, only she has SPS—Stiff Person Syndrome.  Every pain, every seizure remains seized in part. Forever.  As if she’d had bone fusions done on every part of her skeleton.  Frozen, like wood or marble.  Permanently.  In 2015 she was riding her bicycle 5 miles to work and then back.  Charging up 4 flights of stairs, ready to begin the day with enthusiasm.  Going home the same way to love and enjoy her husband and two boys, then out again to a grueling rehearsal or performance.  Making people cry, making people think, making people laugh. Making People Laugh!  In 2016 it stopped.  It took three neurologists to diagnose Stiff Person Syndrome

It’s been a gradual change, like a freight train is “gradual.”  Like a tornado throwing a tree through your house is “gradual.”  Now, Sherry Ward is in a wheelchair, barely able to move, suffering, sharing what life is like with SPS.  Stiff Person Syndrome.  “Stiff,” as in marble. “Person,” as in somebody else.  “Syndrome,” as in a condition, not a real thing.  But it is real.  So she wrote it all down.  A one-woman show “Stiff” was born. A show about a condition that is so horrible that fortunately, only 333 people in the US have it.  A condition we can all understand very well because we feel her pain in ours.  But, also, a condition we will never understand and one that will not only never go away but will get much worse—worse than any worse we ever imagine for ourselves.  There is some relief:  Ward has been prescribed a ‘cocktail’ of pain medications that includes muscle relaxers and seizure medicine as well as pain relievers and anti-convulsants. The ‘cocktail’ provides some blessed relief. The belief is that with the treatment, although there is no cure, many of the symptoms can be controlled.  But, laughter is still the best medicine.  In “Stiff” Sherry Ward shows us how to live with the impossible. She makes us laugh.  Yes, laugh! 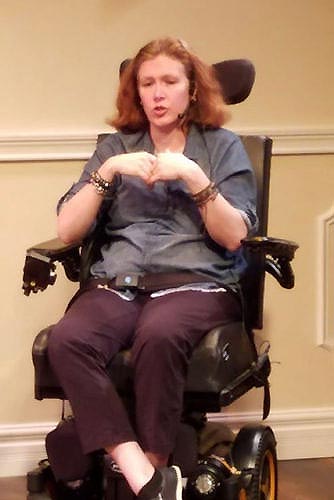 Sherry Jo Ward, author, and actress of the autobiographical “Stiff” performed in Oklahoma City on November 21, 2019.

The pain shows in Sherry’s body, in what is left of her movement, in her little finger that reaches out to tap the joystick that controls her chair so she can look you directly in the eye, speak right to you as if there’s no one else in the audience—and make you laugh. Laugh with her because she is laughing.  Laughing at life.  When there is nothing to laugh at, that is what you must do.  So that’s what she does.  So who am I to complain about having to take a pain pill?  Like wearing a hat to the theatre (ordinarily a no-no) so I can sit on it when the pain is too hard on my legs, and my butt, while her butt is stuck in a chair.  Stiffly I rise and applaud.  Crying, Laughing, Guilting.

*According to Google this ancient quote is also not attributable to anyone by most scholars, although some credit Helen Keller, who certainly did say it, as well as lived it.  Like Sherry.  Fortunately, Sherry has the support of friends, husband, children, mother-in-law, Stage helper, (Pam Dougherty) and Director Marianne Galloway.  In addition to directing, Galloway also technically produced “Stiff” through her company, Risk Theater Initiative. Ward has an advantage as an actress—her face is not only beautiful it is versatile and very expressive. She is no longer independent but she is certainly needed.  Her boys need her.  Her family needs her.  The theatre community needs her.  The medical community needs her.  I need her.  Stiff Person Syndrome is very rare.  So is this amazing and transformative play: “Stiff.” So is playwright, actress, wife, mother-Sherry Jo Ward; a unique treasure.  “I cried because I had no shoes until I met a man who had no feet.” * 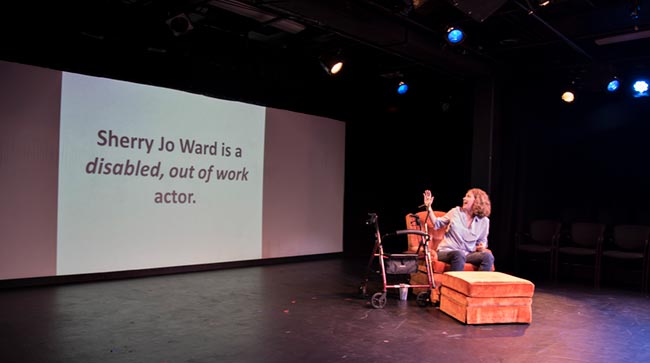