“Holmes and Watson” Take a Plunge 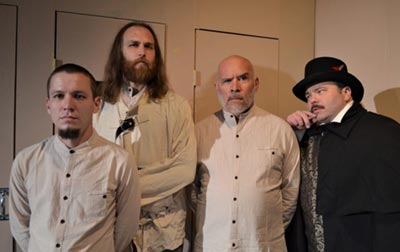 Carpenter Square is presenting another Jeffrey Hatcher success:  “Holmes and Watson” directed by Tom Cowley.  Jeffrey Hatcher is a renowned playwright, whose award-winning plays have been produced with great success and earning rave reviews, including at Carpenter Square.  The production “Holmes and Watson” first premiered in 2017 in Arizona and is now showing here in Oklahoma City through November 9, 2019.

Theatre is a collaborative art form.  It requires the dedicated cooperation of playwright, director, actors, technical crew, and audience.  While each is indispensable to the overall success of the production, it is the actor who communicates the director’s vision to the audience.

In Carpenter’s production of “Holmes and Watson,” it is uncertain if the collaborative process will create an overall success.  Throughout the run of the play, the characterizations usually improve as the actors become more familiar with the script, employing two important elements of a theatrical production: diction and timing.  All the cast members of “Holmes and Watson” have excellent diction, but timing is a problem as the principal performer struggles for his lines, and this severely impacts the timing of the overall production. 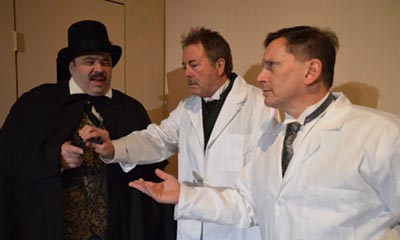 Dr. Watson protests when Dr. Evans and his orderly confiscate his gun as soon as he arrives at their remote asylum. Pictured left to right are Greg Crall, David Bryant, and Ed Spinelli in “Holmes and Waton.”

And yet, they are so close!   A few more weeks in rehearsal and “Holmes and Watson” would have been another accomplishment for Carpenter Square.  Fortunately, the second act is an improvement.  As the play progresses the actors seem to be more relaxed, allowing a release of tension and therefore improving memory as well as diction and timing. Also, a little less concentration and more confidence would be helpful. Though struggling, they all actually know their lines much better than they think they do.

The story is quite convoluted: When Sherlock Holmes was mysteriously lost, both Professor Moriarty and the great detective apparently fell to their deaths and no bodies were ever found. Nearly three years later, Dr. John Watson has been called to an asylum to identify inmates claiming to be the late super sleuth. Watson is prevailed upon to determine which lunatic is the real Holmes.  There are many twists and turns; no one is who they appear to be and the play could be not only a thriller, but a wonderful and witty experience.  Many of the cast members have possibilities, but the main actors must always know and understand their parts well enough so that everyone can perform well.

Ed Spinelli portrays Dr. Evans, the doctor who has called Dr. Watson in to identify the correct Holmes.  Making his debut at Carpenter Square, Spinelli has an impressive resume. In fact, his program bio refers to working on memorization for this play.   His diction is excellent, but his hesitance fails him.  Greg Crall plays Dr. Watson; he has better command of the script, but is unable to compensate. Outside of that, the two seem to be excellent choices for the roles.   David Bryant plays the orderly, a fundamental role and he plays it with some degree of clout. 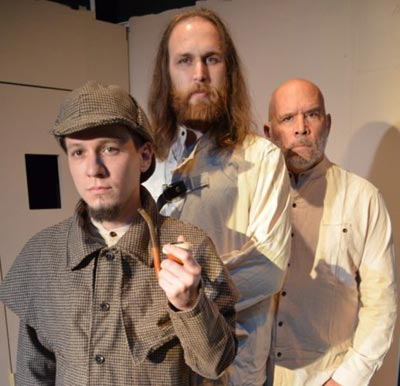 Ford Filson, Peter Fischaber, and Grant Brittan portray the three men claiming to be Sherlock Holmes in Jeffrey Hatcher’s “Holmes and Watson.” Holmes was believed to have been dead for almost three years, but it is now up to Dr. Watson to try and end the confusion. The new thriller plays at Carpenter Square Theatre October 18-November 9 at the theater located at 800 W. Main in downtown Oklahoma City. For more information, visit carpentersquare.com, and for reservations, call 405-232-6500.

The three Holmes pretenders are Ford Filson (Holmes #1,) Peter Fischaber (Holmes #2) and Grant Britton (Holmes #3.)  Of the three, Britton’s Holmes is blind, deaf and mute so he has limitations until he finds his voice at the end and then it is quite good.  Filson and Fischaber try very hard to create meaningful characterizations and succeed to a degree, but as they are unable to control the scenes, their success is limited.  Paul Tomlin has the role of the evil and determined Professor Moriarty.  His role is small, but vital, and he attempts to make the most of it by drawing out his vowels.  It is a laborious delivery, leading one to surmise Cowley may be more concerned with clarity than understanding- perhaps he has compounded rather than avoided the memorization problem.

“Holmes and Watson” has only one woman, the Matron, portrayed by Laurie Blankenship.  She, alone of the cast, has a complete understanding of her role and that is reflected in a bright speech pattern that is easy to follow. She is somewhat able to sidestep the actors on stage with her.

“Holmes and Watson” plays October 18 through November 9, 2019 at Carpenter Square Theatre.  Carpenter Square is still located at 800 West Main in downtown Oklahoma City.  For tickets and information visit www.carpentersquare.com or call the box office at 405.235-6500. Perhaps by the final weekend, the cast will be comfortable enough in their roles to have a little fun, and give the audience the fun it deserves.