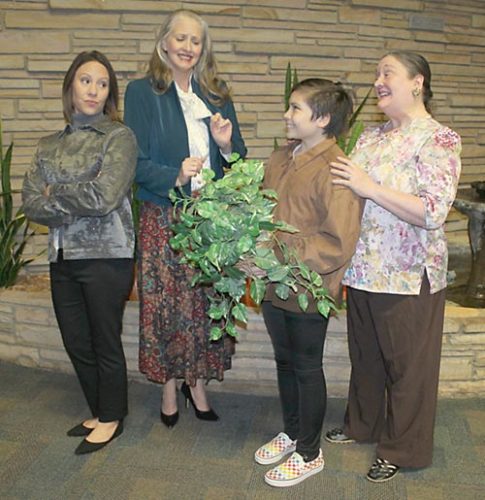 Jewel Box Theatre ends Season 62 in conjunction with the end of this year, 2019, presenting “Little Old Ladies in Tennis Shoes”.  It is an amusing tale of suburban life in the 80’s by Sandra Fenichel Asher.  This cute comedy is directed by Deborah Franklin, familiar to Jewel Box audiences for many years.  Franklin has assembled a delightful cast of gals to make this show a hit!

The action takes place in an apparently up and coming neighborhood actually populated predominantly with elderly people.  Heroine, Kate Corrigan is a modern career woman of the period driven to success in her career but lonely in her life.  She has just purchased her first home and only discovers the neighborhood is filled with fuddy-duddies as she is unpacking after the closing.  Neighbor Molly Blumenthal and her grandson Jeff Bernstein come calling, welcoming Kate into the neighborhood.  Soon the two are regular guests in Kate’s home.

Kate has no love in her life, but she has no regrets, modern career women often didn’t in the   decade of selfish self-discovery.  She has a relationship with her boss; Bill Clayton that can be best described by a phrase developed then and is still very popular.  It is:  friends with benefits.  No complications, no entanglements.  His marriage keeps her free.  Kate’s friendship with Molly is unusual because Molly comes from a generation that did not believe in free love; a generation that understood the phrase which became popular in the 30’s and is often used but misunderstood today.   It is:  there is no such thing as a free lunch.  In other words, Kate may be surprised at the price of her independence.

Molly is a recent widow having moved in with her daughter, Marsha Bernstein and Marsha’s husband and son, Jeff.  The marriage is full of rancor and the home is an unhappy one with both Molly and her grandson feeling like unloved interlopers forced to witness the incessant battles.  The two take refuge at Molly’s home.  Molly also introduces Kate to the other neighbors, elderly ladies dormant, but only because society holds no value for them.  They meet at Kate’s for tea, and, while the visit is uncomfortable, Kate shares a bond with all of them.  The play is funny and poignant illustrating that cultural changes are slow, but the effects can still be startling.

The versatile and talented Denise Hughes stars as Kate Corrigan, beautiful, intelligent and driven.  Hughes expertly exposes Kate’s self-absorption and the derision she has but hides for  ‘unfulfilled’ housewives.  Yet she is delighted to have made friends with Molly Blumenthal played hilariously by Chris Harris.  Molly immediately sees the emptiness of Kate’s life and wishes her to find happiness, but she also readily adapts to some of Kate’s modern attitudes.  Harris never seems subtle, but her ability to put such depth into her character so neatly is amazing.  Both Kate and Molly feel maternal to the young Jeff Bernstein played wonderfully by Asa Brittan.  Brittan commands the audience with his helplessness in the face of unhappy bickering parents.  We see his suffering in Brittan’s very posture-the mark of true actor. The three begin a friendship spanning the generations, each teaching the other about living life to the fullest. 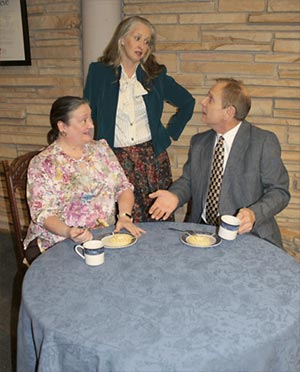 Mark Ingham plays Kate’s boss and lover, Bill Clayton.  Ingham and Brittan are the only fellows in the show, and they both hold their own with these talented ladies.  Ingham character develops as a genuine man, modern, but understanding much of modern attitudes as a mistake.  The grief in his eyes communicates a great deal.  Katy Hayes plays Molly’s daughter, Marsha Bernstein, the frustrated housewife, mother, and daughter.  Hayes displays her bitterness towards her unhappy life everywhere and doesn’t seem to understand how hurtful the bickering is to others, especially to her son.  As the realization dawns on her, she is able to evoke the understanding without verbal expression.

When Molly organizes the group of neighborhood women to meet at Kate’s house for tea, attitudes begin to alter.  The ladies have an awkwardly revealing get together that is full of humor. Carol McDonald-Walley stepping into the role of Mrs. Feldman at the last moment does exceptionally well.  (Soon Mary Moore will recover and is expected to return to the role).Pat Lincoln makes an exciting debut as Mrs. Davis.   Kelly McDonald enchants as Mrs. Petrelli, retired entertainer with her fabulously funny and feathery fluttering adventures. All of the characters are ensemble stars of this show brilliantly cast and exposing very interesting and dynamic characters for the audience to love. 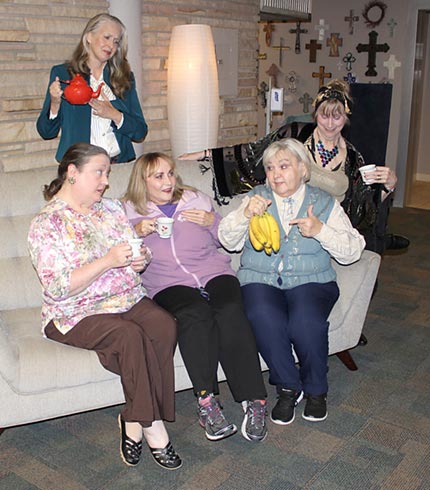 Mothers who devote their lives to their family are often left bereft while they still have much to offer and Career Girls who devote their lives to their jobs are also left behind learning too late that living without love is not life.  “Little Old Ladies in Tennis Shoes” acknowledges this lesson charmingly and is a great finale to the Jewel Box Theatre 62nd season.  The Jewel Box will return with a 63rd season at a still undisclosed location and this beloved theatre in the round will have a new look with old values.  This location has been the place of dreams for over half a century. The old memories will be cherished and new stories will be written. “Little Old Ladies in Tennis Shoes” runs November 15 through December 8 as the final production of Jewel Box Theatre at 3700 N. Walker.  For tickets call the box office at 405-521-1786.  The curtain goes up at 8:00 pm Thursday through Saturday and at 2:30 for Sunday Matinees.

I have just learned of the death of a man I have always admired:  Lyle Dye.  I enjoyed learning from him and working hard for him.  I loved auditioning for him.  He made me laugh.  He has just left us, and I mourn for his loss but remember he lived his life well.

At Oklahoma Art Scene and Hurd, we have all tried our best to maintain an objective perspective.  It is important to review the production, not the play, and it is important to provide constructive criticism, rather than petty barbs.  (Although there are occasions when the constructive criticism includes a zinger, it is actually quite rare).  The commitment we make to our readers and the theatres to provide useful information.  We owe it to our readers to be entertaining, hence the occasional zinger, but the exercise is not about our creative abilities in writing—it is about the creative talent on stage and all who participate in bringing it to life.

Writing the review for “Little Old Ladies in Tennis Shoes” was very hard for me to retain my objectivity.  I rely on friends and family to read it and keep me on track and they assure me it is objectively done.  I rely even more on my colleagues, Editor Jillian Pritchard Ball and Managing Director, Adrienne Proctor.  I have often used my friend Mary Ellen Redmile Cooper as a consultant and will continue to do so.  My husband was with me for “Little Old Ladies in Tennis Shoes” and assures me that I haven’t let my emotions color the above review.  Nevertheless, I feel compelled to add these feelings as bonus material.

In the 70’s I spent a lot of time at the Jewel Box Theatre where many dreams were made.  After graduating from OCU I auditioned at the Jewel Box and Stage Center or Oklahoma Theatre Center, even Lyric (with MY voice)!  They used me as the fire-eater, as that is the talent I have, it certainly isn’t singing!  In those days Kelly McDonald and I were best friends and neighbors.  We did “Anne of a Thousand Days” together with another friend from OCU, Kathleen Milligan.  The three of us became a team…Kathy, Kelly and me.  These things don’t always last…Kathy and I both lost track of Kelly.

On Friday night, filled with emotion, I walked into the Jewel Box Theatre thinking this was the last time to walk down these steps, reliving many of my experiences…”Ready When You Are, CB” directed by Cookie Stout.  “Blithe Spirit” “Night Must Fall” and “Story Theatre” are some of the plays I was in.  I thought about the Oklahoma Theatre Center, now gone, and the plays there…”Lysistrata”  “The Corn is Green” “Anne of a Thousand Days” and
“Godspell” again, as a fire-eater.  I thought of friends lost, like Cookie Stout and Lyle Dye.  I thought of friends lost track of, and friends I haven’t. While many people I worked with are gone now, their names are written in my heart.  My memories of excitement, success, disappointment, and dedication are important, but the funny ones are my favorite.

Here at the Jewel Box Theatre, while doing “CB” one night there was a young couple who had gotten their tickets and waited in the car for the show to start.  Clearly they were very involved with one another. They waited too long and when they came into the lobby the show had started.  I was the only one there waiting for my entrance cue with my bag of groceries.  They thought I was props, and figured they could sneak in behind me.  So they did. They snuck right onto the set. Walked right into the middle of the stage living room. The stuff of nightmares. I had to introduce them as neighbors who’d locked themselves out of their apartment and needed to go in through the window.  I created a window for them to crawl out of to get to their apartment.  The girl was wearing a very short skirt as was the fashion in the 70’s.  I made the window very high.    There are other memories.  One of the last shows I saw at Jewel Box before moving away was “The Lion in Winter” with Kelly.  So many memories.  I sat down, opened the program and there she was.  Mrs. Petrelli……..Kelly McDonald.  After forty years.  We will have new memories to make at the next incarnation of the Jewel Box Theatre.

My review is, I think, objective.  Kelly was wonderful as the ‘fabulously funny and fluttery Mrs. Petrelli.  Brilliant.  They all were. That’s objective.

The show is a comedy.  Kelly’s performance was amazingly wonderful!!!  Seeing her for the first time in 40 years, I got tears in my eyes.  That’s subjective.