Hilarity from Carpenter Square with “A Comedy of Tenors” 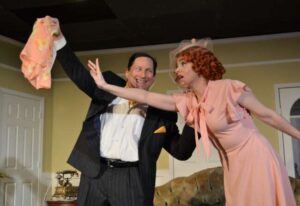 Carpenter Square Theatre has a hit with “A Comedy of Tenors” by Ken Ludwig opening February 26 and running through March 20, 2021.  Many are familiar with “Lend Me A Tenor” Ken Ludwig’s award-winning play from 1986 and will appreciate revisiting these hysterical characters.  Rhonda Clark directs “A Comedy of Tenors” with an excellent cast and she develops a significant rapport with her actors.  This of course allows for chemistry between the characters to develop at it’s fullest, and the next step is the all-important connection with the audience.  This show is full of slapstick and tickle, song and falling down knee-slapping humor and the cast makes the most of every opportunity to entertain.

In the 1930’s life was simpler than it is now, and things seem to go smoothly if life doesn’t interfere…but life always interferes just like now.  In Paris Henry Saunders is the producer of a new show featuring three tenors.  Terry Veal reveals the frustrations of a producer expertly as he vainly tries to control his uncontrollable performers.  Without his former assistant, Max, he has no chance.  Max is no longer his assistant, he is in fact, a tenor himself and must interrupt his rehearsal to help corral his headlining co-cast members.  Peter Fischaber is Max, calmer, and possibly able to solve the arising impossible problems.  Since they have only three hours before the curtain goes up, surely nothing can go wrong.  But it can. 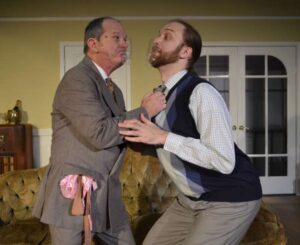 The leading tenor of the upcoming show is Tito Merelli, Italy’s favorite tenor for many years.  He is emotional and his beautiful but volatile wife is just as emotional.  The two fight and make-up constantly, even though they have been together for many years and have a grown daughter.  Tito Merelli is played by Ed Spinelli who is becoming a familiar face in Oklahoma Community Theatre.  Spinelli also portrays Beppo, the bellhop, who also turns out to be an amazing tenor.  These dual characters are a perfect vehicle for Spinelli’s talents, and his humor shines.  He credits Regina Grimaldi for her assistance in voice helping his portrayal of an operatic star, but the comedy is all his own.  J. Christine Lanning is Maria, a character reminiscent of Sophia Loren, and Lanning has the looks, manner and talent to pull it off beautifully. 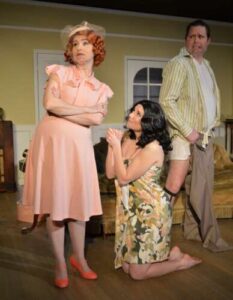 Carlo Nucci is a popular tenor, and Tito, of course, dislikes him intensely.  So, naturally, he is destined to become the third tenor in Saunders production.  Keegan Zimmerman is excellent as Carlo Nucci revealing his own great comedic talent.

Shelby Love (seen regularly as Traffic Anchor and Host of Living Oklahoma on Fox 25) plays Mimi, the daughter of Tito and Maria.  Mimi has her own ideas about her future in spite of having a typical Italian father who doesn’t believe daughters should grow up.  She has a boyfriend, and Tito isn’t going to like it, although she has her mother’s support.  This creates  some very amusing scenarios with a few misunderstandings and extremely funny consequences.

With all these tenors floating about surely a soprano must be waiting in the wings and she is.  Tatiana Racón is the Russian soprano played by Katy Hayes. This character is quite the vamp played with great delight and sensuality by Hayes. 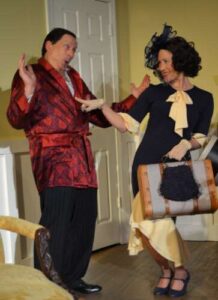 Ed Spinelli in his dual role as Beppo the singing bellhop is enthralled by the charming Tatiana played by Katy Hayes. Photo courtesy of Rhonda Clark.

The exceptionally strong and energetic cast of “A Comedy of Tenors” definitely does justice to the material under Clark’s guidance.  Technically the show plays well with Ford Filson stage managing and voicing Jacques Pessoir.  Ben Hall and Clark developed the Scene design and Jay Schardt handles the lighting.  Overall, the crew is essential to any production and this crew is no exception.  In addition to her thoughtful directing, Clark also designs the sound and costumes for the show.

Before the show or during the intermission it is always enjoyable to check out the art in the lobby.  For “A Comedy of Tenors“ the artist is David Burkhart familiar to Oklahoma City audiences as an actor of note, he is also talented in photographic art.  His works are on display through the run of the show.

Carpenter Square has developed strict guidelines for live performance as the pandemic begins to loosen its grip on the world.  The concessions are closed, and social distancing is practiced in the seating.  Masks are required and the actors are wearing face shields.  It is a thoroughly controlled environment and “A Comedy of Tenors” is definitely a show that needs to be seen live to appreciate the antics this talented group shows us.

“A Comedy of Tenors” is being shown through March 20, 2021 at Carpenter Square, 800 W. Main in downtown Oklahoma City.  For tickets and information visit www.carpentersquare.com or call 405-232-6500.  It is time to have a good laugh, and “A Comedy of Tenors” will provide a wonderful one! 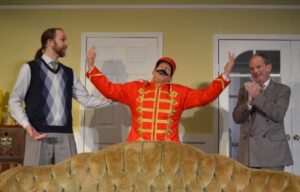