Hilarious Spoof “Evil Dead: The Musical” Back by Popular Demand! 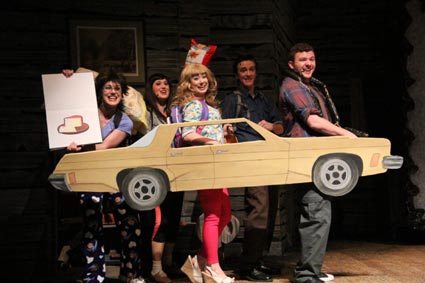 Unsuspecting youths making their way to the cabin in the woods–Cast of “Evil Dead: The Musical” Photo Courtesy of Jared Blount, The Pollard Theatre

The Pollard Theatre reanimates “Evil Dead: The Musical” to an audience committed to fun, frivolity and fabulous fear.  In 1981 Sam Raimi conceived the horror flick, “The Evil Dead,” birthing an entire franchise dedicated to bad zombies.  George Reinblatt wrote the book and lyrics for “Evil Dead: The Musical,” premiering in 2006, and it has since become a part of the cult classic ‘Evil Dead’ series. Additional Lyrics are by Christopher Bond.  Music is by Frank Cipolla, with Christopher Bond, Melissa A. Morris and Bob Daleman and George Reinblatt.

Jared Blount directs seven magnificent actors as a rather unusual assortment of characters in “Evil Dead: The Musical” on a frighteningly divine set by Heidi Hoffer.  The spooky lighting is by W. Jerome Stevenson.  Costumes, un-blooded and bloodied, are by Michael James, as well as the sound by Blount all enhance the tantalizingly terrible experiences the actors face. 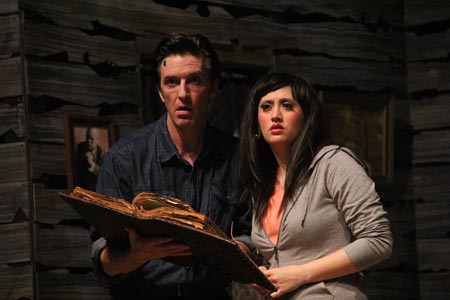 Wil Rogers as Ash and Megan Montgomery as Linda reach in horror to ‘The Book of the Dead’ in “Evil Dead: The Musical” Photo Courtesy of Jared Blount, The Pollard Theatre

The play stars the talented Wil Rogers as Ash, leading his friends to break into a seemingly abandoned cabin in the woods.  Following are girlfriend Linda, brilliantly played by Megan Montgomery, and the amusing Kristin Küns is kooky sister tag-along Cheryl. Best friend Scott is exuberantly and libidinously played by Ian Cummings. Laura Renfro is wonderful in dual roles: Scott’s slightly dim pickup Shelly and then as arrogantly educated Annie searching for her father, the scientist who owns the cabin in the woods. Joining her is hen-pecked boyfriend Ed, amusingly played by Kaleb Bruza.  Jon Philip-Olson is Jake, the local who appears to guide the hapless strangers and becoming entangled in the web of the dead.

The five intrepid explorers find a copy of ‘The Book of the Dead’ in the cabin with some pages missing. They unknowingly awaken the demons living in the trees surrounding the cabin.  These demons are the undead, or those who have died, yet their bodies are inhabited by an evil force not their own.  One by one each member of the group is attacked and then joins the host of zombies harassing the living.  Ash survives and Annie shows up with the missing pages from the book that apparently enables the dead to die and the living to live. 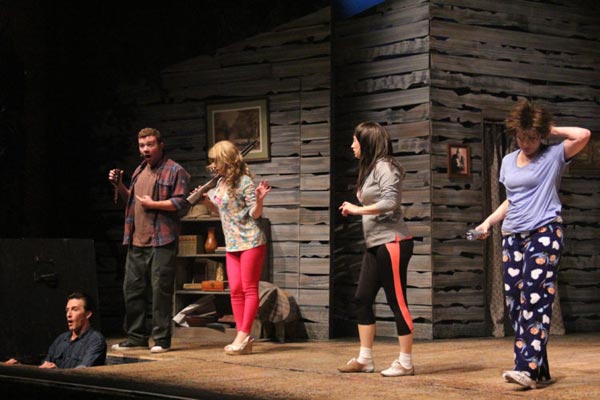 There is a certain logic that most people use when faced with desperate circumstances.  The characters in “Evil Dead: The Musical” as in all of the ‘Evil Dead’ franchise efforts always do the exact opposite of what should be done to live.  Each death is quite bloody and each victim spouts streams of blood and gore.   The first two rows in the auditorium are considered the splatter zone, and patrons seated in the zone will be drenched with fake, harmless blood.  Yet, in the moment, it does not seem fake; it is, however, comic.  The next two rows are a buffer zone.  Patrons should be safe there, but as the characters in the play have discovered, safety is often an illusion. The malignancy created by Blount and carried forward by Rogers and the entire cast is both haunting and threatening to the extreme.  The bizarre situation is what creates the fun and campiness of “Evil Dead: The Musical” and the resulting humor is uproariously side-splitting as well as gut-wrenching, yet delightfully disgusting.

Music direction is by Todd Malicoate and the band plays on with Jason Hunt on guitar, Aaron Marshall on drums and Malicoate on keyboard.  The music sets an ominous mood, and with Hoffer’s set, the atmosphere is menacing and sinister.  The fog machine adds to the atmosphere as well, but those who are sensitive might want to bring along a decongestant.

The campy cult classic “Evil Dead: The Musical” runs October 11 through November 2, 2019.  Curtain is 8:00 pm Friday and Saturday nights.  There are no matinees shown, but there is a performance for Halloween, Thursday, October 31, 2019.  For tickets and information visit www.thepollard.org or call the box office at 405-282-2800. Watch out for the splatter zone and watch out for zombies, they are everywhere nowadays, by popular demand!