High Energy “Fully Committed” at Lyric on the Plaza 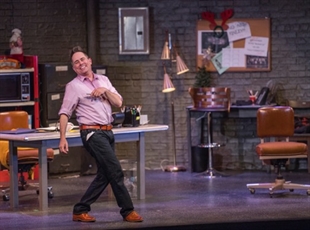 Lyric Theatre has brought an entertaining and energetic show to their Plaza stage. “Fully Committed” follows a day in the life of a reservation clerk at an upscale Manhattan restaurant. Played by Martin Burke, Sam is the guy at the bottom of the pecking order as he responds to calls and demands from patrons, coworkers, family, and boss, all of whom are played by Martin Burke.  The one-man show was written by screenwriter Becky Mode as a form of tribute (and possibly revenge?) to her own early years as an actress, hat-check girl, and waitress in New York. This production is directed by Dave Steakley, who has used Burke to great advantage in this multi-character tale. Our hero, Sam, is answering the reservation line while trying to get his boss the chef to let him have Christmas off so he can visit his father out of state. His colleague/supervisor is playing hooky, the maître d’ is avoiding a client, the chef is recovering from a hangover and planning the day while worrying about seating VIP Tim Zagat, the real-life publisher of a restaurant survey that is extremely influential.

Burke plays all of these people, each with his or her own angst and issues. For the most part, Sam is in the basement taking reservations. However, the restaurant is full for the next three months, so he’s having to shoehorn people in. At one point he’s even offered a bribe.  Sam is also an actor (it’s New York, after all) and is occasionally talking to his agent’s assistant. We get to see the assistant lie to Sam, we are in on the whispered conversation about how to get Sam to go away, and we hear the conversation with Sam’s roommate who is happy to gloat about his own auditions. Burke shows us each character with body language and dialect and tonal variations in a veritable tour de force of acting technique.

The set puts us in the grubby basement, and the lighting and effects clarify time of day and season of the year; designers Dawn Drake (scenic design) and Stephen Toney (lighting design) are to be congratulated. Costume designer Jeffrey Meek and props designer Jenny Barrett have made their work all but invisible; we are not distracted by or overly aware of any of the aspects of their work because they have simply made the world of the play be the world of the play.  Sound designer Craig Brock merits a special mention since the various sound cues tell us who is calling from where, and this significantly backs up Burke’s many voices.

“Fully Committed” is written with a chaotic sense that is very true to the environment, but it gives the actor and director a challenge: the story is a little hard to pick out at first. Steakley and Burke manage to underline and lift up the line of the story without smoothing out the chaos of Sam’s day.

Posted in 2016, Past Reviews
Search
Categories