Hedwig at The Boom is Everything You’ve Waited For 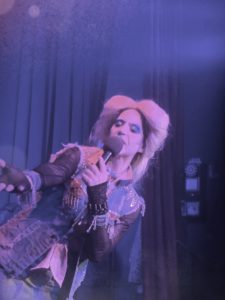 Matthew Alvin Brown stars as Hedwig in Hedwig and the Angry Inch.

Renowned stage and screen writer John Cameron Mitchell and musician Stephen Trask’s Hedwig and the Angry Inch is not a musical. It’s a rock narrative, disguised as theatre, which is disguised as a drag show, and it’s all balled up into the fire and fury of one wronged woman. It’s a middle American tragedy set in the back alley dive bars that decorate our country, playing host to the down and outs and the would be rock stars on open mic nights. And it’s unapologetically and unequivocally rock and roll.

Hedwig’s is no one’s success story, least of all hers, but it’s a story that must be told. Described by her creators as “genderqueer”, the East German born rock icon unfurls her tale and unravels in front of her small but agreeable audience. The scene is intimate at The Boom, the venue that fits this show more perfectly than any bright regional stage in OKC can. The small space makes the audience a part of the show. When you’re there, you’re in it.

Hedwig begins life as Hansel, a “slip of a girly boy” from Cold War era East Germany. Hansel dreams of life and love on the other side of that hated border wall, no, not that one, the other one. His desperation to escape and find his mythical other half leads him to a reluctant sex change that doesn’t take and leaves Hansel in a hopeless state of being no longer a man but not quite a woman. Now Hedwig, she finds herself stuck and alone in Kansas.

Though bleak, Hedwig deserves as much of a chance at a happy ever after as any of us do, and her troubles will leave you hoping the best for her. The music pulls you in. The show begins with a hard rock tune that quickly reminds you that you’re not witnessing a cookie-cutter musical. But it’s the acting that keeps you engaged, and the two main roles are expertly crafted by Matthew Alvin Brown as Hedwig and Renee Anderson as Yitzhak. Brown and Anderson are reprising the roles that they’ve played, and played well, several times over the last ten-ish years in various productions in Oklahoma City.

Matthew Alvin Brown and Renee Anderson as Hedwig and Yitzhak.

The tension between Brown and Anderson is gritty and raw. They clash both emotionally and physically as Hedwig’s anger explodes onto everyone she shares the stage with. Something seems amiss from the get-go and it’s clear that this night isn’t like the others. Hedwig’s letting Yitzhak have it, like she always does, but tonight, Yitzhak isn’t taking it like he normally does. There’s a subtle shift that begins to show itself early on. Both actors convey that tension. It’s funny and uncomfortable, and adds layers of complication to their already complex relationship.

Hedwig’s band is a powerhouse force of glitter and rock. The Angry Inch is portrayed by Jason Hunt on guitar and keys, Larz Justice on bass, Tristan Gfeller on guitar, and Aaron Marshall on drums. These dudes truly rock and together with Brown and Anderson, they’ve created a hard-hitting show that is in your face and loud. It’s awesome, no holds barred, rock out music you can sing along to. Just try not to throw out a “rock on” hand sign or keep your body still. You’ll fail. 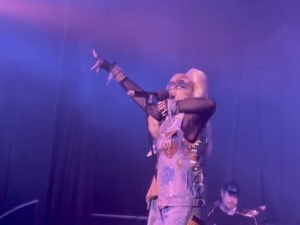 This cast is putting it all out there. Their tears and sweat, and in the case of opening night, their actual blood, is left onstage. They’re truly committed and are convincing in their plight as a struggling rock band, taking the abuse hurled at them by their broken and angry front woman.

Yes Brown and Anderson have performed Hedwig, many times before, and much has been said about prior productions. And yes, those other runs were good, even great. But this one is better. The chemistry between the two leads has gotten deeper over the years. Their connection is stronger. They’re seasoned, not just as performers but in these roles. It makes for rich storytelling and a beautiful relationship. Where they may have been green in productions past, now they’re solid gold.

Brown has delved so deep into playing Hedwig, and portrayed her so many times, that the bond he shares with her is unlike any other between actor and character. Brown is a rock icon in his own right, and his wit and honesty make Hedwig real and alive. Too often, Hedwig is portrayed as a caricature, a funny drag persona with little depth. Brown takes her seriously and makes her human. He tells Hedwig’s truth, in all its beauty and anguish. 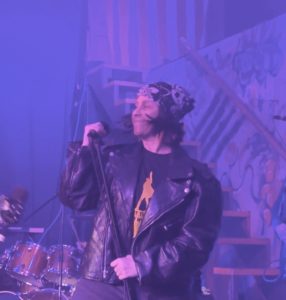 Renee Anderson as Yitzhak in The Boom’s production of Hedwig and the Angry Inch.

One night of basking in this character is enough to make you a lifelong fan, perpetually waiting for the next time you can see the show again, and hoping against all odds that it’s Brown and Anderson when you do. Their commitment to this story, and the previous turns as Hed and Yitz, have led up to the beautiful thing that’s happening on 39th Street. It’s easy to see that Hedwig is a part of who is portraying her, and vice versa. Perhaps Hedwig has found her long sought-after other half after all, in the two superb actors who’ve been dedicated to telling her story, with sensitivity and levity, for nearing a decade alongside each other.

Just thank your lucky stars you haven’t missed it entirely, and commit to a ticket this run. Hedwig and The Angry Inch at The Boom is on until March 2nd. Tickets are available at ticketstorm.com.

Posted in 2019, This Season | Tagged The Boom, Hedwig and the Angry Inch
Search
Categories