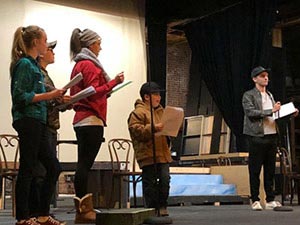 This Christmas season, The Pollard Theatre is offering a new take on a well-known holiday story. It’s A Wonderful Life: A Live Radio Play is based on the timeless 1946 movie, which starred James Stewart and Donna Reed. Joshua McGowen stars as the down and out George Bailey, with Kara Chapman starring alongside him as Mary.

Artistic Director W. Jerome Stevenson says that he and the company asked themselves, “What new way can we tell the story?” and decided the goal was to fall back into the story-telling. Stevenson realized there was no point in trying to modernize the show since it’s very heavily engrained in the timeframe. Stevenson calls the radio play version “simpler, broken down, and ideal for the show. He says “this format will resonate with modern audiences in its ability to transcend timeframes with its universal message.” Stevenson also remarks on the pre-television experience offered by live radio performances, which relied heavily on voices and sound effects, saying “television created the first visual entertainment experience. Now, we can individualize what we watch and when. Each thing we personalize for our own viewing device separates us a little more from each other. Live radio had families huddled together, listening and experiencing a story together. That value we put on togetherness, particularly during entertainment, just doesn’t exist in our society anymore. It’s gone.”

Stevenson adds, “This art form, not just live theatre, but storytelling, is in danger in today’s plugged-in society. Lots of musicals appeal to audiences by attempting to impress with effects and high-budget flash.” Chapman adds, “You watch it, and you’re into it, because it’s flashing in your face.” That’s never been what The Pollard is about. Their goal is to engage the imagination and bring an aspect of human empathy to their performances. Stevenson says, “The audience knows what it feels. Nothing disengages empathy more than telling someone how to feel. But if they understand the emotion on the stage because they recognize it, that’s when they can empathize.”

Chapman agrees, “The holidays can actually be the loneliest, most depressing time of year. The younger generation is living in this era of ‘13 Reasons Why’ and this glorified image of suicide. It’s A Wonderful Life shows that truthful side of suicide and even depression, and it’s human and real to feel that way. And it shows something that people may not consider; the domino effect of your life.”

Stevenson adds, “Most people with some humility think ‘I’m lucky. My life is wonderful, but, when is the bottom going to fall out? I’m not worth what I thought I would be.’ It can cause some to self-destruct. Everyone around us now seems to have a wonderful life. Thanks to social media and Instagram filtered versions of reality. But, love is your success, and the message of the show is simple. We don’t always know where we’re valued, or if we’re valued at all. And God’s greatest gift is the gift of life he gives us.” 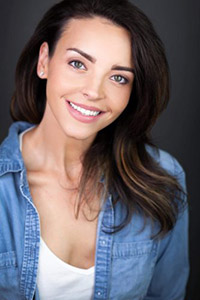 Kara Chapman stars as Mary Bailey in The Pollard’s It’s A Wonderful Life: A Live Radio Play. photo courtesy of the artist.

Chapman continues, “Playing Mary has an iconic sense to it. You don’t want to exactly recreate the movie performance. You have to make it your own. Mary is so patient and sweet. She’s sincere. I look at her, as a modern woman, and see how some could paint her as a cliché. But that’s who she is. Some people just have the ability to love without conditions, and that’s Mary. I’m excited to be a part of something different and to introduce a new audience to this beautiful story. As an actress, I like to see the effect I have on people, and change perspectives. I ask myself, ‘How can I be human? Who is this person?’ I get the chance to do that.”

Discussing his role as George and The Pollard’s new Christmas tradition, 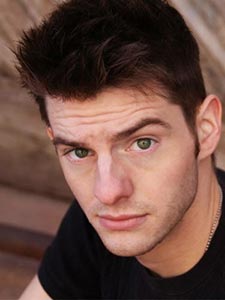 Joshua McGowen is the iconic George Bailey in The Pollard Theatre’s It’s A Wonderful Life: A Live Radio Play. photo courtesy of the artist.

McGowen says “The Pollard does a great job at telling stories. And the fact that we get to tell a different kind of Christmas story is the most exciting part for me. It’s A Wonderful Life is a story that never gets old. I’ve always loved the movie, and to be playing George is like a dream come true. I can’t wait to tell his story again.”

When asked how he and his character are similar, and what differences they have, McGowen adds, “George and I are both passionate and determined. But, I already love my life, whereas that’s what George must learn.”

It’s A Wonderful Life: A Live Radio Play opens November 23 and runs until the eve of Christmas Eve, December 23rd, in historic downtown Guthrie, 120 W. Harrison Ave, Guthrie OK. Guthrie at Christmas time is simply a must-see that you will want to come back for every year! For tickets, visit thepollard.org or call the box office at 405-282-2800. 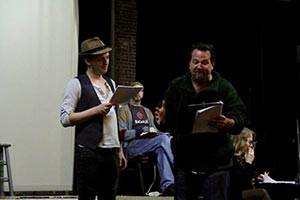