“Hair” A Crowning Achievement from UCO and CityRep! 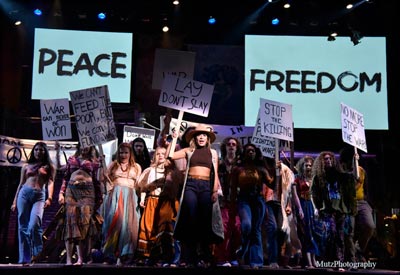 The University of Central Oklahoma and Oklahoma City Repertory Theatre have been collaborating for a decade providing excellent theatrical productions, and Hair is at the pinnacle of great musical theatre.  Of course, fifty years ago, Hair was a departure from traditional musical theatre, and the success of the musical was a surprise to writers Gerome Ragni and James Rado.  Alongside Greg MacDermott (music), Hair became an overnight sensation.  Half a century has passed and Hair remains as sensational as ever.

Hair is the original rock musical, ultimately the template for musical productions that followed such as Godspell or Rent, setting a high standard.  The story follows a ‘tribe’ or group of bohemian hippies and their struggle against established mores and ideas.  Fifty years ago so much was going on that gatherings became a ‘happening’ as youthful idealists rebelled against the draft and prevailing artificial social constructs.  They grew their hair, demanded freedom for themselves and others, protested against injustice, racism and sexism.  They experimented with mind altering drugs, free love and embraced loud music.  Every generation rebels, but in the 60’s it was a renaissance.  They wanted to change the world.

Hair is still relevant today—not because they failed to change the world but because they triumphed in changing the world.  We have made a lot of progress in these five decades, and we are moving forward because the long hairs made a difference.  They succeeded, and they are still accomplishing goals as witnessed by the audience for this production of Hair at Mitchell Hall on the UCO campus. 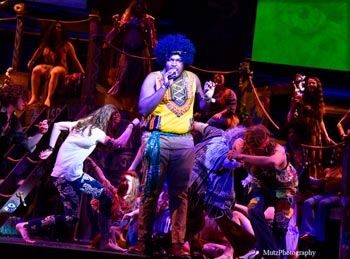 Donald Jordan, Founding Artistic Director of City-Rep and Steven Smeltzer, on the Musical Theatre faculty at UCO have put their heads together to combine professionalism in equity theatre with the stamina and creativity of the outstanding students UCO boasts!  Smeltzer’s direction and choreography is based on his vast experience, including performing in several productions of Hair.  As a result, the cast of Hair does a magnificent job in creating these characters and in re-creating the idealism that brought about so many changes during our 20th century renaissance.

There are 37 roles in Hair and each and every performer does an outstanding job singing, dancing, leaping, joyously and lovingly with excellent understanding and characterization.  Cameron Blakely is Claude, who must decide whether to burn his draft card, or succumb to establishment pressures and do his military duty. Blakely reveals Claude’s complex character with skill; his angst and his tenderness, his humor and humility.  Claude understands that he is at a crossroads and the decision he makes now will have a long term effect. Blakely is able to smoothly communicate this complicated character to the audience with natural wisdom.  Hagen Wano is Berger, who is prepared to burn his draft card and more with expected impunity.  He is an angry young man, hiding his emotions behind a happy-go-lucky façade that tears at the soul. Hope Chancey is Sheila, who loves them both, and more than anything she loves justice. Chancey bridges the transition from wise woman to little girl with charm and ease.  These three dedicated actors have excellent chemistry with each other combined with intense rapport with the audience. They are supremely believable within the bizarre context of cultural revolution.  As a result, the songs are evocative and poignant, and the emotions broadcast through voice are devastatingly true. 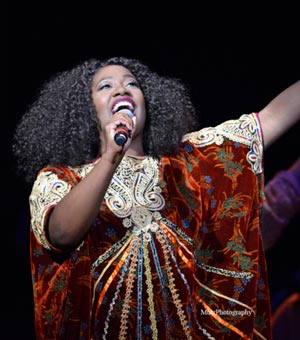 Caleb Barnett as Hud, Mandy Miller as Jeanie, Erica Burkett as Dionne, Easton Edwards as Woof and Sophie Mings as Crissy are all tribal leaders in this far-out diverse group of drop-outs changing the world.  The depth of feeling each character has provided substance to the important subplots.  Barnett is Hud, comfortable in his own skin, colorful in his attitude as well as his skin.  Barnett is beautifully proud and gentle. Miller’s Jeanie is up front in more ways than one; she has humor and style in her personality that allows us to predict her experience will be positive in her long term motherhood. Her joy in life and loving is humbling and ecstatic. Burkett’s Dionne is funny and sexy, the Black American Princess sticking out her tongue at the world.  Burkett conveys the attitude with cheerful abandon. Edwards is Woof the uniquely prancing, dancing boy next door.  He blends his opposing natures easily in this performance.  Mings creates a Crissy both beautiful and bold, dedicated and graceful; she gives Crissy a façade connected to reality.

Brad Baker is Margaret Mead, the eccentric lady who questions and surprisingly supports their endeavors. Baker creates a character at the opposite end of his own spectrum with ease and a clarity that makes Margaret Mead delightfully outrageous, prim and proper and potently natural.  Baker is a natural comedian as well as a skilled actor, blending the two disciplines with disciplined concentration.

The ensemble cast members have each created magnificently individual characters.  Each one stands out connecting to various members of the audience with unswerving accuracy.  Megan Montgomery is hysterically funny and she also pulls my hair out by the roots with severe gentleness. Jaleesa Beavers is a New York actress on her way, far from her Oklahoma roots.  Returning home to appear in this production gives us a treat.  Thank you for coming and sharing talent and song so graciously!  The phenomenal energy of the dancers led by dance captain Tristan Hill, and the soaring voices led by vocal captain Graeme Morrison create a great magic. Music Director Mariann Searle leads the orchestra from Aquarius to Sunshine weaving the music seamlessly with the vocals; it is never contrived.   Than Medlam and Jay Gleason on guitars, Nick Federer on bass and drummer, Peter Pollock.

All the ensemble members are illuminating in their performances. (Many years ago I had a beautiful skirt, peasanty and stunning–I was like a gypsy and it flowed about me as gracelessly, I danced.  Somewhere along the way it disappeared.  Now I know, one member of the ensemble raided my closet 50 years ago.  It flows gracefully as she dances with a dreamboat hunk from my checkered past.) Their faces blend into many visages seen over the years in too many productions to count but their voice and talent is indelibly stoned forever in memory. 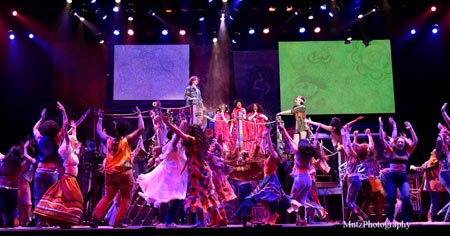 These ensemble members bring great substance to their tribe and their roles, each tribe member connecting especially well with differing members of the audience.  The experience is shared.  And as a result, the work of Hagen Wano, Cameron Blakely and Hope Chancey shines.  This Hair is riveting; on the edge of your seat you will also dance, and sway to the beauty of the music and the incredibly gifted cast members. There are many adjectives one could use to describe the talent and dedication these young performers bring to Hair but there is one that fits every single actor listed above, as well as every one of the additional tribal members and that word is fabulous.  FABULOUS!  The youngsters 50 years ago did make a difference, and the youngsters on stage at Mitchell Hall are changing the world with their song, their dance and their passion carrying their message with very special talents!

Hair is being shown at the Mitchell Hall Theatre on the UCO campus (University and Main) through Sunday, February 10, 2019.  Curtain is at 7:30 pm and Saturday and Sunday will also include a 2:00 pm matinee.  Yes, there is brief and discrete nudity, some profanity, and a little hallucinogenic assistance, for shock value, but the innocence and idealism is paramount.  The talent is superb, the set, lighting, sound, music and movement are superior in every way.  This show deserves a standing ovation, a jumping up and down ovation and furthermore, it’s pretty groovy.  Call the box office 405-848-3761 for City-Rep or 405-974-3375 for UCO. This crystal revelation; this experience is too important, too relevant and too nostalgic to miss!

What a powerful piece of performance art!! I saw Saturday evening’s performance, my first time experiencing Hair in all my years of theatergoing. This show is a beautiful, moving experience and a staple for the personal catalog of anyone who loves theatre. In it, you can find the sparks of inspiration that became Rent, Dogfight, and even Hamilton. Without Hair, those musicals wouldn’t have existed. Hair created the rock musical, the protest art that entertains you while breaking your heart, and teaches you about the world our parents fought to give us.

This stunning cast of young artists carry the burden of the past while holding onto their youthful hope. Hair was shocking and controversial in the 60’s, and while it’s not as shocking by today’s desensitized standards, it still holds relevance and cultural significance. This wonderful cast recreates a landmark moment in American history. Emotionally charged, groovy, and absolutely breathtaking, they’ll take you to a turning point when the world was changing and the growing pains were felt by everyone. If you’re not old enough to have experienced the timeframe brought to life on this stage, speak to someone who is. Their story is probably similar to those of the characters.

Another brilliant collaboration by UCO and CityRep!