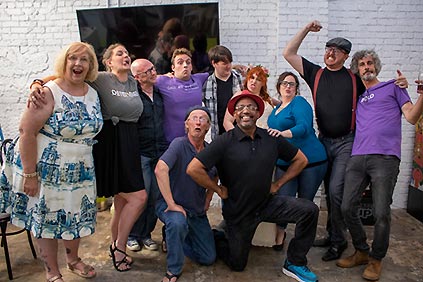 “Romeo & Juliet….sort of” “Drunken Classics” and soused Shakespeare—the marriage of improvisation and Shakespearean lilt.  The 3rd Act Theatre Company is a brand new theatre located at the popular Shoppes at Northpark at the corner of 122nd and May Avenue.  Until they begin their first season with “The Lost Boy” August 8, 2019 at this great location, they have been gathering at many of the watering holes throughout the city showcasing their talents.  They do so with wine taken with wisdom and beer imbibed with balance.  So does the audience participating to the extent they wish.  Shakespeare purists would be appalled at the turns the adlibs take but Shakespeare himself may very well enjoy and join in with glee from above.  Who knows?  Or, rather, who doth know?  Or rather does any Impertinent Flea-Bitten Canker-Blossom care?  The audience is given a list of Shakespearean Insult Generator’s and anything italicized comes from that list. It becomes an Infectious Idle-Headed Barnacle and it could easily be printed on a t-shirt that is for sale.

Romeo and Juliet suffered a tragedy as they rebelled from their feuding parents.  Many have shed tears over their unjust demise, but thanks to The 3rd Act Theatre, the tears shed are the result of great mirth as the performers, (with a great deal of audience assistance) improvise Romeo and Juliet out of misery and despair into merriment and delight.  These shows have been a fundraiser as well as a wonderful glimpse into the talents from the 3rd Act actors. 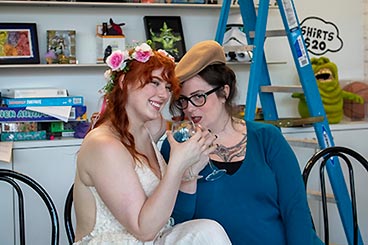 This production of “Drunken Classics” as the improvised Shakespearean and Classic titles encompass includes seven experienced Shakespearean actors with amazing improvisational talents.  As a result there are moments when Romeo has no bones and Juliet wildly gyrates her hips with an imaginary hula hoop.  The nurse indiscreetly nurses from her own bottle of brew. Who knows what the audience members decide who have been elevated to King and Queen of the evening through the evil auctioneering of the company and the equally evil contribution of their friends?  Romeo becomes a Scotsman with a brogue and ends each sentence with typical Scots blasphemy.  However, Juliet has become a marine drill sergeant and the nurse takes another tipple.  Lord Capulet is only 5 years old and apparently the Friar farted.  Or was it Juliet? Or Romeo?  At any rate they are hitched.  The nurse hiccups and has another tipple.  The role of Tybalt is temporarily being taken by Elmer Fudd. The play goes on as Juliet fakes her death and drinks the potion but sends the note to Romeo that she is not dead.  As the narrator explains, ‘what could go wrong with a plan dependent on the 16th century Italian Postal Service?’  Meanwhile, the roles of the servants, Tybalt, Benvolio and Mercutio are temporarily being played by the Kardashians.  And the nurse has another tipple.

This comic interpretation is directed by James Tyra and co-directed by Jamie Brewster.  (The hilarity requires alternate directors in the event one of them is dissolving.)  The cast includes Don Taylor as the Narrator/Prince tasked with interrupting actors with Royal Points of Order or instructions regarding their performance.  The ideas are taken from the King and Queen and occasionally from the nurse who has Drunken Points of Order to inflict. 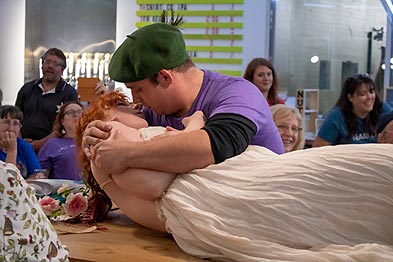 Justice Wickstrom plays Romeo ranging from goofy to annoying, Brooke Howard is Juliet, beautiful and firm—not the sweet young usually seen in Juliet!  Hanna Mobley is the nurse and a hysterically funny nurse as she has been enjoying herself a bit!  Keegan Zimmerman as Benvolio/Friar, Nicholas Toscani as Tybalt/Servant and David Mays as Lord Capulet/Mercutio complete the Shakespearean cast slimmed down in numbers significantly.  Don Taylor as Narrator/Prince has been added to provide continuity, hilarity, communication and fill in any gaps from the slimmed down version.  As a group, the cast is hysterical!  Each has his own level to stoop beneath!  The Bawdy Fool-Born Bar-Wench  is delightfully exposed while Beslubbering Earth-Vexing Strumpets prevail!

This production of The 3rd Act Theatre Company was developed among five friends created a mysterious event based on a dream of how they would develop a theatre company.  So they founded The 3rd Act and d have made their dreams a reality.  See?  Anybody can do it!  The founders are:  Michele Fields, Allison Kubat, Christine Jolly, Amandanell Bold and Don Taylor.  These founders have created a new community theatre combining the talents of five individuals with 75 years of community theatre experience.

The first season is about to begin, but hopefully the fundraising efforts will continue delivering hilarity with the ‘Drunken Classics’ series.  The opening show for Season # 1 is “The Lost Boy” by Ronald Gabriel Paolillo a story taken from the life of James M. Barrie the first of the Lost Boys.  The show runs from August 8 through August 18, 2019 and will be at The 3rd Act’s venue in the Shoppes at Northpark at 12040 N. May Avenue. 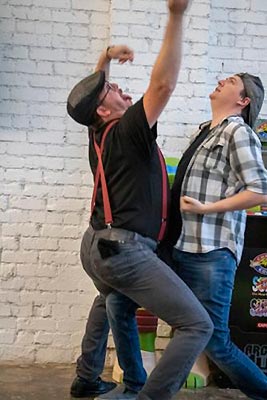 The season will include three more offerings:  “Dracula” by Gary Wright, running October 3-13 2019, “The Importance of Being Earnest” running February 6-16, 2020, “Moonglow” running April 3-12, 2020, and they will all be at the Northpark location.  For information and tickets about any shows and fundraising events visit www.3rdacttheatreco.com or email: [email protected].  The Oklahoma City metropolitan area welcomes another fine community theatre to the creative pulse in this talented city.  For the Saucy Motley-Minded Wagtail’s among us we have the 3rd Act Theatre.