Go Back to High School with UCO’s Grease 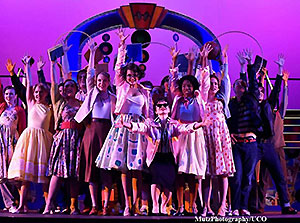 Though it debuted in 1971, with a hit movie in 1978, it seems like Grease has been around forever. It’s woven so completely into the American songbook, and heavily into the theatre rotation, that nearly everyone from sea to shining sea knows the songs, the characters and at least some of the story. But in case you’ve somehow missed it entirely, here’s a quick rundown: Based in 1959, the classmates of Rydell High, an Anywhere, USA High School, assemble back at school after an eventful summer. A new student joins them, the demure Sandy Dumbrowski, Catholic school reject with that classic new girl persona. She recounts “summer nights” spent at the beach with the dreamiest of boys, completely unaware that the boy in her story, Danny Zuko, is the leader of a band of ruffians called the Greasers, and he goes to Rydell also. Sandy’s new group of friends, The Pink Ladies, are the feminine equivalent of the Greasers, and they’ve got stories of their own. Danny and Sandy are quickly reunited, but trials are evident from the get-go. Grease is a sock-hop era Romeo and Juliet, and Sandy and Danny are two star-crossed teenagers from different sides of the tracks.

The Greasers are Danny, played by Dylan Herrin, and his buddies Kenickie, Doody, Roger, and Sonny. The Pink Ladies are Betty Rizzo, Frenchy, Jan, and Marty. Sandy is played by Morgan Rothwell. Herrin has a smooth swagger as Danny. He’s confident and suave, but fooling no one about his feelings for Sandy. Herrin is an enjoyable Danny Zuko. This character doesn’t typically hold up well for modern audiences. He’s just not traditionally a likeable guy. Herrin’s version, however, is toned down just enough that he’s slick, but not slimy. He’s got that princely charm, but he’s not obnoxious or crass. He’s a real dreamboat. Rothwell is understandably sweet as Sandy, but she’s also strong. She finds her place among the Pink Ladies, at her new school, and with Danny. She’s not afraid to stand up for herself. Rothwell portrays Sandy like she should be. Not weak, but coming into her own. She’s tough in her own gentle way. 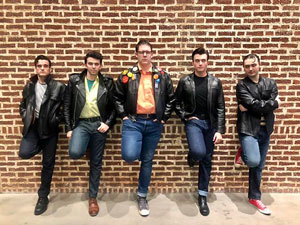 The Greasers of UCO’s production of Grease.

D.J. Fortner is Kenickie, Graeme Morrison is Doody, Ben Hardin is Roger, and Seth Paden is Sonny. Stand out moments occur for each of the Greasers. Fortner’s “Greased Lightnin’” pumps up the audience, and rightfully so. He’s perfectly placed in the convertible during this number, showing off as the singing, gyrating, jalopy-with-potential owning Kenickie. Likewise, Morrison tears it up during “Magic Changes”, stealing the scene with his pizzazz. He utilizes the acoustics in that high-ceilinged theatre flawlessly. It’s magic indeed. Hardin’s moment comes, of course, with “Mooning”, Roger’s anthem and love song to Jan. Hardin has wit, personality, and comedic timing down to an art. Paden is the class clown of the bunch. He’s a full-body actor, expressive from head to toe. As Sonny he’s quite endearing and cute. He’s up for anything, with energy and lightness on his feet to drive home that point.

Chelsea Thiessen is saucy and sultry as Rizzo. She walks with a haughty air, the posture that’s synonymous with Rizzo. Her song “There are Worse Things I Could Do” is a turning point for both her character and Sandy. Thiessen delivers the song, and the message therein, with emotion and poise. Thiessen’s a powerhouse, a true force to behold. Kalyn Glover is superb as Frenchy, the bubbly beautician to be. Glover is delightful and cheery as she incites empathy for the crestfallen Frenchy. She’s an everywoman, very relatable in her struggles with her studies and education endeavors. Her imagination runs wild during “Beauty School Dropout”, which is sung to her by the Teen Angel, played by D’Shaud Howard. Howard is brilliant, a sparkling angel who brings Frenchy back down to earth. 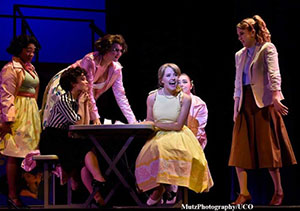 The Pink Ladies of Grease. Photo by Mutz Photography.

Hailey Hatfield is Jan, the funny Pink Lady who loves to eat. Thankfully, that aspect has been downplayed in this production. Nothing is more miserable than having to sit through a two hour musical while watching a character who’s eating during every line of dialogue. That kitsch is downright gross and distracting. While she does down a Twinkie or two, it’s not constant, thankfully. It would certainly be terrible to miss the vocal and acting talents of Hatfield due to edible props. More than just comedic relief, Hatfield’s Jan is genuinely likeable and crowd-pleasing. Her banter and budding romance with Roger is pulled off without a hitch.

Sarah Royse is Marty, the glamorous goddess of The Pink Ladies. Royse croons effortlessly during “Freddy My Love”, slinking up and down the stage in her silk robe, a gift from her out of town beau. Marty’s the fashionable one. She’s also the voice of reason and packs a punch with her one-liners. Royse is statuesque and cool as she stares down those greasers, and no man stands a chance against her. She’s just too smart for them all.

Jackson Lease is the adorkable Eugene Florczyk. Lease is silly and sweet as this nerd, and watching him dance is simply hilarious. Tyler Treat is the terse Patty Simcox, a teacher’s pet who takes high school very seriously. Treat sashays across the stage and pertly swings her ponytail, a woman on a mission. She proves a worthy foe to Sandy as she vies for Danny’s affections. Daniel Johnson is Vince Fontaine, radio personality and host of a school dance competition. Johnson is appealing yet sleazy, elegant and snakelike. He’s downright villainous.

Jaci Reed is Miss Lynch, the killjoy teacher and cohost of the dance contest. The excitement during the dance proves too much for her, and in this moment Reed lets loose. Reed is brave and unabashed, with a skillset that ranges from uptight and snobby, all the way to jubilant and carefree. Jessica Cajina wipes the floor with the fellow dance contestants as Cha-Cha DiGregorio. She singlehandedly wins the dance-off with Danny as her partner. 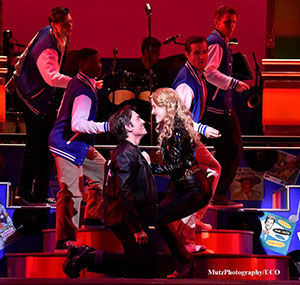 Dylan Herrin as Danny and Morgan Rothwell as Sandy in UCO’s Grease. Photo by Mutz Photography.

This production is a thoroughly rehearsed, well-greased machine. Smeltzer’s choreography is air tight. Fans of the movie can easily recognize the characters, but they’re not carbon copies of the film. Each actor has taken their role and given it their own personal touch and flair. Grease is nearly fifty years old, and with its controversial themes of youthful angst, underage drinking, teen pregnancy, and fitting in with the crowd, it could easily feel tired, archaic and overdone. Thankfully, that won’t be found here. This cast and Smeltzer’s crisp direction make an absolutely dynamite show. They’re energetic and electric. This Grease feels new and exciting, while remaining nostalgic and yes, even more than a little empowering. For now, and probably forever, Grease is still the Word.