Glorious Ghosting from the Pollard Theatre with “Ghost the Musical” 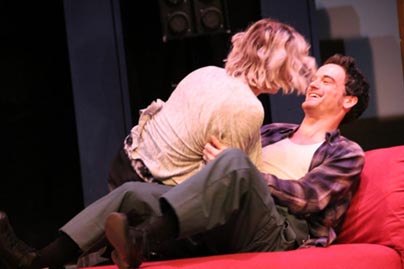 Now it is told musically! A story of love eternal and the bonds that death may never break.  A yarn of heroism and defeating corruption; an adventure filled with suspense.  A tale of friendship devastatingly false—yet withal a new friendship profoundly loyal.  “Ghost the Musical” is the latest hit from the Pollard Theatre in downtown Guthrie, thrilling audiences through October 27, 2018. “Ghost the Musical” is adapted by writer Bruce Joel Rubin from his hit movie “Ghost.”  Music & lyrics by Dave Stewart and Glen Ballard, the show retains the essence of the original movie adding the musical numbers gracefully.

“Ghost the Musical” follows the story of two New York lovers, Sam Wheat and Molly Jensen, a young couple with the world at their feet and planning a future together.  After Sam’s untimely death, Molly is left bereft, and Sam is trapped between life and death as a ghost.  He’s unable to ascend beyond or below; he has unfinished business left on earth.  The unfinished business is his murder, and he must solve it to save Molly from becoming another victim.  He finds help from Oda Mae Brown, a medium who has never, until meeting Sam, actually contacted someone from the other side.  He’s unable to communicate with Molly or his best friend and colleague, Carl Bruner.  He maneuvers Oda Mae into assisting him. So, although she resists, she is given no choice. 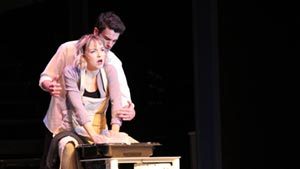 Emily Pace as Molly works at her potters wheel as Seth Paden as the ghost of Sam caresses her. Photos courtesy of the Pollard Theatre

The cast is a solid reflection of their joint talents, each member performing beautifully in their roles, leading or ensemble.  Molly Jensen is played by Emily Pace, a young actress with great vocal and emotional range.  Pace bonds on a universal level with Molly making her portrayal lovable and loving, heart-wrenching and truthful.  Her voice is clear and lovely, becoming Molly with grace.  Sam Wheat is portrayed by Seth Paden, and he’s the ideal Sam.  His shock at suddenly losing his life is palpable. It’s electric, traveling in waves through the audience.  Each transition he must make is subtle yet profound.  Carl Bruner is played by Charlie Monnot an actor quite familiar to Oklahoma City audiences, is frequently a gentle and kind character, but in “Ghost the Musical” he is cast against that type.  Bruner has a kind façade, but a rotten core. Monnot reveals the sinister and selfish Carl with skill and a chilling desperation.

Oda Mae Brown, the con artist medium who routinely preys upon the gullible, is played by De’Vin Lewis, a notable Oklahoma City talent.  Lewis expertly reveals the Oda Mae’s heart of gold. Her comedic timing is as profound as her incredible vocals.  A joy to watch in every scene, Lewis gives an amazingly solid performance at each and every step!

The supporting and ensemble cast is excellent–each cast member makes the most of every scene, creating memorable moments.  In addition to directing, Stevenson takes on the role of the mad Subway Ghost with skill.  He is the ghost of nightmares, frightening and fixated.   Dakota Muckelrath is Willie Lopez, the trigger-happy hireling who dispatches Sam.  Another nightmare figure for Halloween dreams.  Mariah Warren is excellent as Louise and Kara Pharoah is wonderful as Clara.  Megan Montgomery, Tiffany Tuggle, Carl Lance and Maurice Quintel are ensemble members who shine in their performances at every turn.  The ensemble is superb; making the most of every delightful moment with quality professionalism.

Band members under the leadership of Todd Malicoate provide excellent accompaniment for each song, They must not be unsung; their overall contribution is exciting as well as song-worthy!  Aaron Marshall is on drums, Jason Hunt on guitar, Tristan Gfeller on bass and Amanda Fortney on violin.  Malicoate is on piano.  These band members frequently play for the Pollard and their considerable abilities are outstanding.

“Ghost the Musical” plays through October 27, 2018 at the Pollard Theatre in downtown Guthrie.  The address is 120 N Harrison Avenue.  Curtain is 8:00 pm Thursday through Saturday with one matinee on Sunday, October 21, at 2:00 pm.   For information and tickets visit the website www.thepollard.org or call 405-282-2800 at the box office Tuesday through Friday.

“Ghost the Musical” is a haunting tale that should be seen, or perhaps a haunting nightmare will result…

The review below is specifically for the paper and will be published in The Oklahoman on Friday, October 26, 2018.  There are similarities, but the differences are greater. Read on… 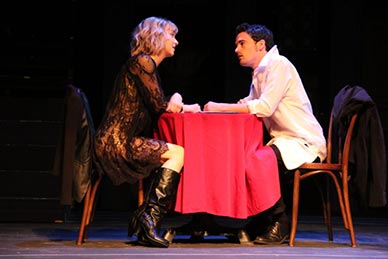 The Pollard Theatre in Guthrie is presenting “Ghost the Musical” through October 27, 2018. Screenwriter Bruce Joel Rubin adapted the musical from the movie “Ghost” that he wrote over a quarter century ago. The love story is thrilling, and the thriller story is chilling, as Sam Wheat and Molly Jensen cope with Sam’s terrible, untimely death. Caught between life and death after his demise, Sam, now a ghost, must solve his own murder in order to save Molly from the same fate. He manages to succeed with the help of a quack medium, Oda Mae Brown. This is also a story of betrayal—Sam’s best friend and colleague, Carl Bruner, is revealed as a villain despite his pleasant demeanor.

Directed by W. Jerome Stevenson and Jared Blount, this production has the advantage of diverse talents as the two directors have such complementary skills. Stevenson is also the designer of scenes and lighting while Blount is the designer of sound and video, creating a beautiful and eerie environment that allows for smoothly creative special effects. Musical Director Todd Malicoate leads an excellent band to provide a very nice accompaniment to the vocals, but also to create an ominously powerful and haunting mood. 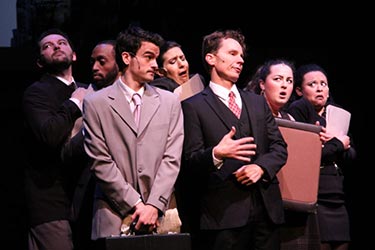 The cast of “Ghost the Musical” is impressive. It boasts some of Oklahoma City’s best talents.  Emily Pace is Molly Jensen. Her vibrancy and emotional range is ideal for the lead female character. Pace has an exceptionally beautiful and expressive voice captivating her audience.  Seth Paden is Sam Wheat. His happy-go-lucky exterior belies the serious man of determination and commitment underneath that the audience comes to know as he struggles to communicate with the living. The two lovers have an intensely powerful connection with each other, one that apparently transcends death, but also one that definitely enchants the audience.

Charlie Monnot is Carl Bruner, friend and colleague to Sam. Beneath his nonchalant-side-kick exterior lies a sinister core of evil and greed. Monnot creates the duality immediately, yet his exposure shocks the audience as much as his betrayal destroys Sam. The menace shows beautifully, even in song. De’Vin Lewis is an amazingly talented singer and actress. Her character of Oda Mae Brown is absolutely delightful. As a medium, she is a charlatan without scruples, but her humanity is heart-of-gold admirable. Lewis has an outstanding voice. It soars throughout the theatre. And in another aspect of her role entirely, she manages to display a wonderful comedic sense that is hilariously funny.

The entire cast of ensemble players brilliantly connects with the audience and each other.  Supporting actors include Stevenson who is fantastically fatalistic and frightening as the Subway Ghost. Willie Lopez is the triggerman without a conscience and Dakota Muckelrath portrays his vile villainy with vigorous vitality. Louise is brought to life by the talented Mariah Warren and Clara is created wonderfully by Kara Pharoah, who makes her Pollard debut. Megan Montgomery and Tiffany Tuggle are exciting additions to the cast that impress the audience with memorable moments. Maurice Quintel and Carl Lance are also outstanding in exceptional performances.  An excellent cast executes individual roles in perfect harmony—whether in dramatic actors’ voice or the captivating, artistic presentation of the musical score!

“Ghost the Musical” plays through October 27, 2018 at the Pollard Theatre in downtown Guthrie. The address is 120 N Harrison Avenue. Curtain is 8:00 pm Thursday through Saturday with one matinee on Sunday, October 21st, at 2:00 pm.   For information and tickets, visit the website www.thepollard.org or call 405-282-2800 at the box office Tuesday through Friday.

‘A haunting tale that must be seen … or perhaps a haunting nightmare will result … “Ghost the Musical!” ‘