Fun with Politics in “Running Mates” at 3rd Act 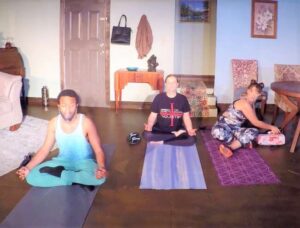 In the throes of this world-wide pandemic it is hard to find a moment that seems normal.  The 3rd Act Theatre Company of Oklahoma has brought those rare ‘normal’ moments to us with their productions.  The audience still wears masks and seating is limited due to social distancing.  But the show allows us to escape for a few brief hours.  The actors do wear face shields that are clear, barely noticeable until the actor drinks or eats.

In the throes of current political upheaval and unrest there are too many unresolvable conflicts.  The 3rd Act Theatre Company of Oklahoma has brought resolution to a simple conflict with the current production “Running Mates: Or The Family Party” by playwright Beth Kander.  This light-hearted comedy directed by Don Taylor explores the political activity of a family highlighting the different perspectives universal to every family.  The love they have for one another ultimately trumps their differences, an outcome that needs to occur not only within families but within nations.

Kander’s sensitive and humorous story is well directed by Taylor with a cast of six.  The story in “Running Mates” revolves around a respected long-term mayor of a small town in Georgia.  Anderson Georgia residents have been electing their mayor, Sam Storm, for so long there is no longer any opposing candidates for his election.  Storm, played by Jim Clark, is a modern man, embracing tolerance and objectivity in his opinions.  Nevertheless, it is not unheard of for a man or a woman engaging in same sex conversations to resort to chauvinistic comments.  So, of course, Storm gets caught doing exactly that! 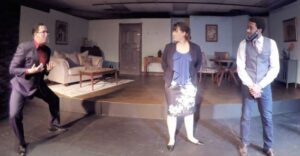 Mrs. Mayor is Sofia Storm played by Leigh Miller. She has an unassailable reputation as an excellent First Lady of Anderson.  When Mrs. Storm discovers her husband’s gaffe, she decides it is time for him to have a refresher course regarding feminine equality.  She throws her hat into the ring for the upcoming mayoral election!  Her dear friend, Liddie Valentine becomes her campaign manager.  Portraying Liddie is Allyson Rose.  Rose is a currently single woman with a tough exterior and a heart-of-gold that complements Miller’s more sedate but determined persona.

Going head to head against her husband leaves room for a great deal of humor that is extended as the candidates have campaign managers also butting heads.  Valentine for Mrs. Storm and Mayor Storm has Jimmy Benjamin (J. B.) as his sidekick.  J.B. is quite frenetic and very literal.  Keegan Zimmerman’s character perfectly balances the mayors  popular but laid-back approach.  As Sofia Storm battles with husband Sam Storm, Liddie Valentine battles J.B. Benjamin. 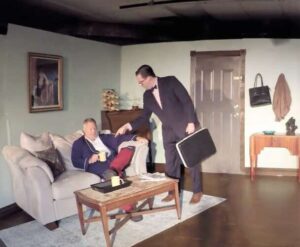 Not only do both candidates vie for the vote of Anderson residents, one resident is of utmost importance.  Which candidate will daughter, Savannah Storm, support?  Savannah has learned a lot from her parents about tenacity and doing the right thing.  Which parent will be the best example to follow?  Allison Sugimoto is Savannah Storm, a strong young actress with the ability to hold her own in any situation.  She makes an interesting choice.

Sofia and Liddy have been taking private yoga classes from an instructor who graciously appears weekly at the Storm home to guide the two women in their yoga exercises and meditation.  This is a privilege that must cease, however both women are quite certain that their yoga instructor, Ted Wink, will support the candidacy of Sofia.  He also makes an interesting choice.  Ted Wink is played by Mercedez Ferguson, a new citizen of Oklahoma City and a welcome addition to the theatrical and documentary photography scene. 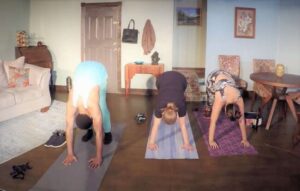 It is pleasant to be concerned about a glitch due to a missed sound cue instead of a glitch from a voting machine error.  More comfortable to watch actors fumbling with their face masks in order to consume their drinks than it is to do so ourselves.  The day will come when the clear face shields are no longer required and actors will not have to deal with the monumental task of acting around them.  Until then, it is imperative to support the actors willing to do so with the grace and assurance shown by the cast of “Running Mates” alongside the excellent crew under the helm of Don Taylor.  After all, it isn’t easy or natural  having a relaxing conversation while sipping a good scotch with an insurmountable barrier to remove every single sip.

“Running Mates: Or The Family Party” plays live on stage at the 3rd Act Theatre in the Shoppes at NorthPark Mall at 12040 N. May Avenue November 13 through November 28 , 2020.  Curtain is 8:00 pm.  The final performance will be available live-stream on November 29, 2020.  Visit 3rdActTheatre.com or call 405-593-8093 for information and tickets for any performance.  Also be sure and ‘like’ 3rd Act Theatre on Facebook.