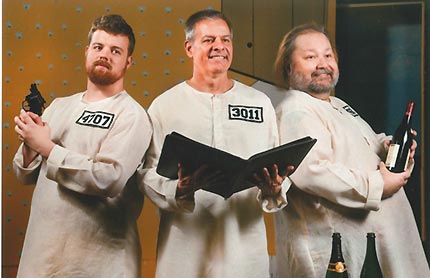 “My Three Angels” is the charming comedy from 1953 written by the collaborating couple Samuel and Bella Spewack and directed by Richard Lemin.  The play takes place in Cayenne, French Guiana in 1910 as the Edwardian Era closes.   Felix Ducotel, an honest, kindly, but quite inept family man manages a mercantile that his cousin, Henri Trochard owns.  He and his wife are having much needed repairs done on the roof by convicts as their home in Cayenne is a French penal colony.  It is Christmas and Ducotel and his wife are dreading the arrival of Monsieur Trochard but their daughter, Marie-Louise is delighted with the impending visit as Trochard’s handsome nephew and heir, Paul will also be arriving.  The three convicts, Joseph (3011), Jules (6187) and Alfred (4707) are excellent roofers and even better eavesdroppers.

As the play develops, these three fallen angels decide to intervene in the lives of the Ducotel family by slightly rearranging the events that are about to take place.  The three men, led by Joseph, want to ensure that the family has a Merry Christmas and that the lovely and innocent Marie-Louise finds true happiness in love.  Like many who operate outside the boundaries of the law they have their own moral code, believing that justice is often served through rather nefarious activities. 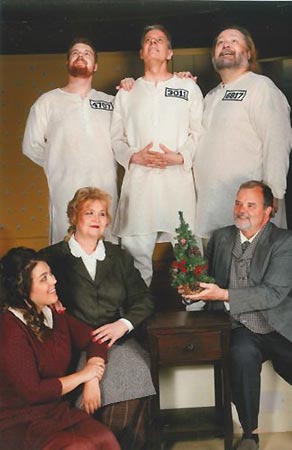 David Patterson, cast as Felix Ducotel is unable to perform due to illness; however it is hoped that he will be able to return during the run of “My Three Angels” hale and healthy.  In his absence Director, Richard Lemin takes over the role, doing so with great skill and believability.  Deborah Franklin is the sweetly smarter wife, Emilie Ducotel, performing nicely.  Allyson Rose is daughter Marie-Louise a lovely, unrealistic character played with charm but no depth.

Chip Chappelle as the profit-loving Henri Trochard is exceptionally well done with just enough devious dastardly villainy to give him an edge, but Chappelle avoids the stereotype.  Clinton Joseph is nephew Paul, a little too one-dimensional for a cad.  Carol McDonald-Walley and Matthew Percival are delightful in their cameos, the flighty Madame Parole and the debonair but genuine Lieutenant.

The three desperado convicts make “My Three Angels” one and all, quite amusing as they plot to undo the plans of the evil Trochard. Using somewhat immoral methods-the end justifies the means-they examine every possible idea to carry out their plan, but invariably choose the illegal one.  Doug Monson is inspired as the con artist Joseph.  Definitely the leader, he enjoys interfering in the lives of the Ducotels.  James A. Gordon is Jules, and he is a rather nervous fellow, once capable of blind rage.  Ideally cast, Gordon still seems to be uncomfortable in the role.  Derek Kenney is the third convict, a young man with strong principles that came too late.  Kenney reveals the humor as well as the genuine pathos in the character. The three convicts are the core of the show and display great timing and chemistry. 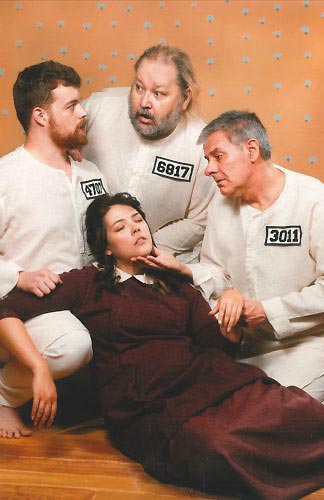 Lemin is a strong director, and as the sudden upheaval calms, the cast will overcome the obstacles that occur with the sudden change.  The chemistry among the three convicts is particularly apparent with Monsoon’s expressions; “My Three Angels” is certainly a worthy show.  However, Monson has a serious scene stealing rival!  Adolph.  Fortunately, he is never seen, only imagined, so imagine away at “My Three Angels” at the Jewel Box Theatre April 18, through May 12.  The theatre is the north annex of First Christian Church at 3700 N. Walker in Oklahoma City.  Visit www.jewelboxtheatre.org or call the box office at 405-521-1786.