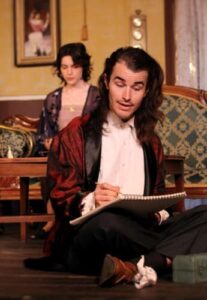 Noel Coward is one of the wittiest playwrights gracing the 20th century his delightful English drawing room farces never fail to amuse and “Hay Fever” presented in 1924 is no exception.  The play is nearly a century year old and while it is a bit dated in some respects the pure comedy of the play is universally timeless.  “Hay Fever” has no discernible plot, but it is notable that many people, especially nowadays have virtually no plot to their lives and this makes the play absolutely relevant to the modern audience.

Don Taylor directs a cast of nine in “Hay Fever” at the 3rd Act Theatre and it is clear that Taylor has a firm grasp of those comic elements that make Noel Coward so much fun.  He put together a cast that has the outrageous subtlety and lazy energy that brings the audience into the piece escaping the dreariness of today’s  problems.

Deborah Franklin plays Judith Bliss a retired actress who has never really left the stage.  The critics called her ‘receptive and exultant’ traits she pridefully preserves in life.  In this farce, she has merely transferred her hysterical histrionics to her drawing room.  She is married to a novelist, David Bliss, who is played by Edmund Gert.  While his character is restrained compared to his flamboyant wife, he ultimately appreciates her performance welcoming her announcement that she will return to the stage.  He has invited a houseguest for the weekend, a young lady who is applying for a job as his assistant.  He also hasn’t told his wife about the invite, or even the maid, simply assuming that the lovely Japanese room will be available at a moments notice.  The ambitious but shy young lady, Jackie Coryton is played by Maddie Loury the typical English ‘rose’ of English sensibilities.

The son of the house is Simon Bliss, played by Reed Bentley.  He has inherited his mother’s flamboyancy and augmented this with a display of faux wisdom beneath his years.  Without telling a soul he has also taken the liberty of inviting a guest, Myra Arundel, noted socialite.  She is a social climber, perhaps a gold-digger, but even she has a hard time blending into the vague confusion that  takes place in the Bliss household although she is the perfect tenant for the exciting designs of the beautiful Japanese room.  Elizabeth Garrison brings a great deal to the role of Myra. 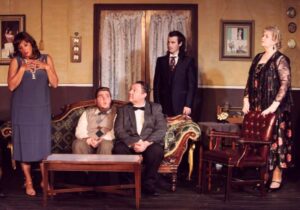 Sorel Bliss is the beautiful and free-spirited daughter of the household, charming and a bit rebellious, but definitely a Bliss at her core.  This role is delightfully played by Lindsay Seaman.  Sorel has recently met a diplomat, Richard Greatham, a nice young man with aspirations and she has taken the liberty of inviting him for a quiet country weekend as surely the lovely but somewhat feminine Japanese room will accommodate them nicely.  Sorel sees no reason to inform anyone of her possible assignation so the diplomat showing up will be an undiplomatic surprise to the rest of the household.  It is no surprise that Joe Burleigh is cast in the role of the accomplished diplomat. 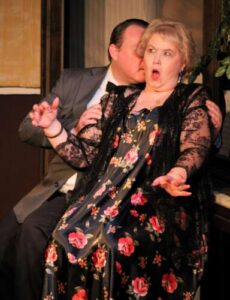 Judith Bliss has also invited a visitor for the weekend—a young fan named Sandy Tyrell who has followed the career of the aging actress since childhood.  The hapless fellow is played by Adam Park Despite the age difference Judith Bliss vamps this poor young fellow with great success planning to install him in the best guest room in the house – the Japanese room.  .  As the mistress of the household, she sees no reason to tell anyone of her plans.

So now the members of the household have doubled from four persons to eight persons, and nobody is inconvenienced in the least.  Everyone seems to ignore the fact that throughout her career Judith Bliss relied upon her dresser to avoid and/or correct any difficulties.  She has continued to have this indispensable asset at her beck and call after retirement and the expert dresser has become an ineffectual housekeeper.  There is absolutely no reason that Clara should be able to plan for four extra guests all promised the same bedroom.  It certainly isn’t necessary to alter the dinner menu in any way, because Clara always manages to manage!  Clara is wonderfully played by Robin Robinson, bringing a great deal of substance to the role.  The role of the maid in a Noel Coward play is always a plum role and Robinson makes the most of Clara with all of her foibles and fumbles!

Life is pretty ridiculous, as is the setting of a typical English drawing room comedy by Noel Coward!  Taylor’s direction gives the audience a brief but essential respite from our cares and he is aptly assisted by Stage Manager Michelle L. Hall and a great crew to boot!  The secret to making “Hay Fever” so much fun is how much joy these actors are having in their roles 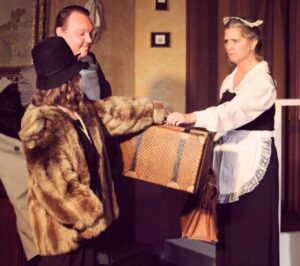 “Hay Fever” runs from September 16 through September 25, 2022 at 3rd Act Theatre in the Shoppes at Northpark Mall located at 122nd and North May in Oklahoma City.  Curtain is 8:00 pm Friday and Saturday and there is also a 2:30 pm Sunday matinee.  For further information and tickets visit     www.3rd Act TheatreCo.com or call the theatre directly at 405-593-8093.  Have some fun!