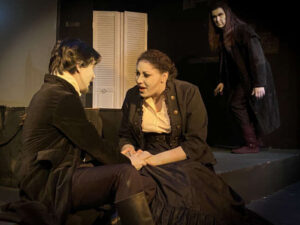 The 3rd Act Theatre of Oklahoma City is presenting a new adaptation of “Frankenstein” through September 27, 2020 as part of their Noire productions.  The final performance on Sunday, September 27 will be live-streamed and all the previous performances are live on the stage at North Park Mall.  The author of this latest version is an actor and promising young playwright, Vincent Hannam, and this production is directed by the talented Dakota Lee Bryant, a promising actor and director in Oklahoma City.  This is quite appropriate as the original author of the novel “Frankenstein” Mary Wollstonecraft Shelley was only 18 when she wrote “Frankenstein” in 1816.

Mary  Shelley’s “Frankenstein” or “The Modern Prometheus” is considered the first literary work establishing the science fiction genre.  Written as a competition between Lord Byron, Percy Shelley, and Shelley’s new young wife, Mary, “Frankenstein” tells the story of a scientist determined to create the spark of life in his laboratory.  The result is a creature, a monster to be feared and pitied, a disaster for his creator, Victor Frankenstein.

Over the past 200 years there have been many adaptations of the story in plays and film. Vincent Hannam’s adaptation re-creates the sensations experienced by movie-goers in the black and white era of Hollywood nearly 100 years ago.  Clearly the story is one that will follow us through the centuries. 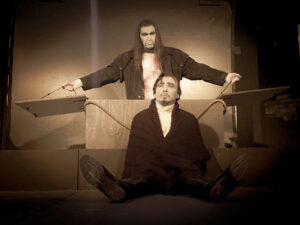 Bryant leads his cast of 3 talented performers into characterizations that are enhanced ty the black and white costuming and make-up.  The occasional touches of red become strikingly vibrant.  The three actors portray all the characters with Ford Filson as Dr. Frankenstein and others, Peter Fischaber as the monster and others and Kat Adams as Elisabeth and others.  It is quite common for fans to mistakenly use the name Frankenstein to refer to the monster.  Frankenstein is the name of the creator and the creature was not named.  This error is quite understandable when viewing this production as one can see that the true monster in the story does carry the name of Frankenstein, and his nameless creation is a victim of circumstance.

Each of the performers create a believable and frighteningly accurate representation of the events, and although they have a little trouble meshing with one another, their interpretations are excellent representations of the original authors intent as well as the intent of James Whale who directed the 1931 classic movie. 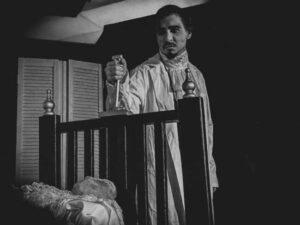 The minimalism of the set as well as the addition of a screen used to shadow and enlarge aspects of the story provide an excellent feel to the show.  As the story progresses one can see realization dawning upon the face of Dr. Frankenstein, who, although a gentleman, has created a monstrosity, and caused a great deal of pain to his primary victim, the raging yet somewhat gentle creature brought to life through man-made science and without the addition of a God-given soul.

Don Taylor designs are always excellent and “Frankenstein” is no exception.  Sound and lighting design by Amandanell Bold, is very effectively done.  Bryant designed the costumes, an integral part of his direction and presumably the makeup as well.  The facial contouring though, must be the result of the actor’s input, as the artistic representation are very appropriate to the facial structures of the cast.

Cristina Adair is listed as a stage hand and also in the cast as Bird.  Her contribution is very effective and striking.  All in all, this production is very well done, although it is assumed that the viewer knows the story well.  Anyone unfamiliar with the story may be very confused, although that is frequently the case in the Noir as well as the Noire genre.  Bleak is more evocative than fact.  Black and white is more shadow than contrast and size has no relevance at all.

“Frankenstein” plays live and on-site at the 3rd Act Theatre in the Shoppes at NorthPark Mall at 12040 N. May Avenue through September 26 , 2020.  Curtain is 8:00 pm.  The final performance will be available live-stream on September 27, 2020.  Visit 3rdActTheatre.com or call 405-593-8093 for information and tickets for any performance.  Also visit 3rd Act Theatre on Facebook. 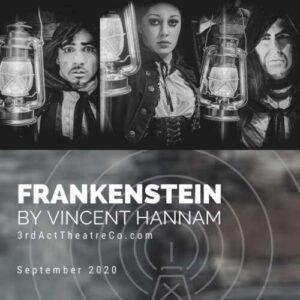