Fascinating, Funny and Fabulous is CityRep’s “A Doll’s House, Part 2” 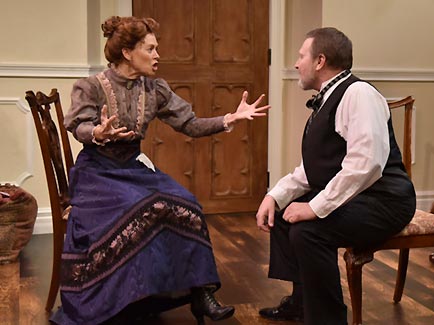 A door slam heard round the world took place on stage at the Royal Copenhagen Theatre in Denmark in 1879.  The date was December 21 and the occasion, the premiere of Henrik Ibsen’s new play, “A Doll’s House”.  The tale concerns Nora, a typical housewife of that era, and her husband, Torvald.  Nora discovers that marriage, in a man’s world, is based on a masculine conception of the ideal wife: an  empty-headed but very sweet possession.  No longer able to stay in such a marriage, Nora storms out, leaving husband, home, hearth, and even her children, behind.  It is one of the very first feminine statements of independence we see on the stage. Yet we feel the reverberations from that door slamming today.

Good writers learn to walk a mile in another’s shoes.  Henrik Ibsen and Lucas Hnath are legendary good writers, able to understand a female character and her perspective beautifully.  “Part 2” requires only an excellent director in order to present the story.  Oklahoma City Repertory Theatre has just the director! Perfect for this show, she is one of the founders of Oklahoma City Repertory Theatre, Ruth Charnay.  In her hands, Nora’s story: her conflicts, her decisions—and their effects on others—comes to fruition with grace and understanding. 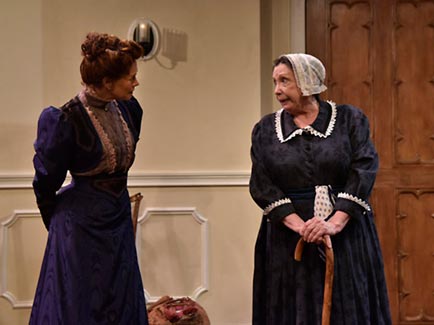 On Nora’s return, she first finds her elderly Nanny who stayed behind, and has raised Nora’s children to be successful adults.  The gracious Anne Marie is now an old family retainer, not fearing to share her opinions with Nora.  Also, there is Torvald, the man Nora once thought she loved, saddled with the changes made since she left.  She also meets her daughter, the child who was too young to remember Nora as her mother: now grown up and full of her own opinions.

These four characters reveal a uniquely sensitive look at the perils of womanhood in the 19th century, the 20th century, and the 21st century as well.  Often it is a humorous look at the ages-old battle of the sexes, but it is also a look back and forward into our human condition with all its foibles and confusion about sex, the role of women in society—and the role of men.  The play is a period piece; it takes place in 1894, but the attitudes and language are truly 21st century.  Under Charnay’s expert direction, Hnath’s approach can be wonderfully understood.  Many things have changed, but today, men are still men and women are still women.  The battle between the sexes rages on, but nowadays the dice are not always loaded so heavily. 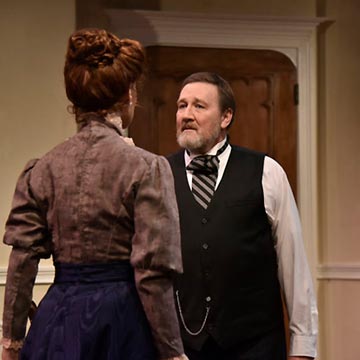 It takes a lot of skill to bridge a century on the stage in an hour and a half, but the cast of “A Doll’s House, Part 2” is equal to the task.  Stacey Logan is not only one of the finest talents in this region, she is also one of the most dedicated to her craft.  She is the perfect Nora for this sequel play as well as the perfect Nora for Ibsen’s vision.  It takes a real man’s man to match her, and to create a character that grows—Steve Emerson is Torvald, precisely as envisioned.  You can see the perfect couple they imagined themselves to be at the beginning of “A Doll’s House.” You can also see the respect that Torvald now has for his lost love.  That we are able to watch that respect grow in Nora’s eyes, is a tribute to the skill of both actors. Emerson and Logan create a power couple to match the writers’ intentions.

Standing up to them, and for them, are Anne Marie, the Nanny, played exceptionally well by Pam Dougherty, and Emmy, the daughter left behind, who is beautifully portrayed by Avery Carlson.  Dougherty brings reality to the role of old family retainer… the one who’s not afraid of her mistress,  who washed the mistress’ dirty face, and who also paddled her behind. Nora cannot escape that familiarity, and needs it.  Carlson’s Emmy startles Nora with her wisdom and intelligence; one can see pride, and also regret, in the face of the lost parent.   It is not surprising to see that Carlson hails from the hallowed halls of Oklahoma City University’s Theatre Department. 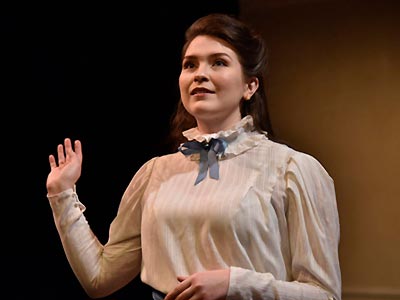 We first see Charnay’s vision for the show in the set design by Ben Hall.  It is simple, yet extremely elegant, and perfect for the period.  Lloyd Cracknell and Jeremy Bernardoni are responsible for the wonderful costumes. The visual effects are well coordinated by Tristan Decker’s lighting design. Steve Emerson can’t stay out of the backstage creative efforts, joining Marcellus Hankins in sound design.  Charnay also has the organizational assistance of Whitney Hendricks as Production Stage Manager, Michael Corolla in properties and assistant stage management, all alongside Donald Jordan who provides further assistance to the stage management efforts.  The show flows with apparently effortless abandon as a result: making it natural, realistic and comfortable for the audience to peer around that fourth wall.

The superb cast relies on the abilities of the understudies for the show.  These actors do the same work, and their contributions are very much an asset to the cast as well as the director.  Debra Rick Gentleman is the understudy for Nora, Michael Corolla is the understudy for Torvald, Roberta Sloan is the understudy for Anne Marie and Kaylila Pasha understudies Emmy.  As a unit, the eight performers bring clarity and a depth of understanding to the show under Charnay’s guidance and consequently,  Logan, Emerson, Carlson and Dougherty deliver an enhanced performance.  Everyone has a little help from the dramaturg, Anna Holloway, and Stacy Logan’s beauty is enhanced by glorious tresses from wig designer, Tod L. McKim. 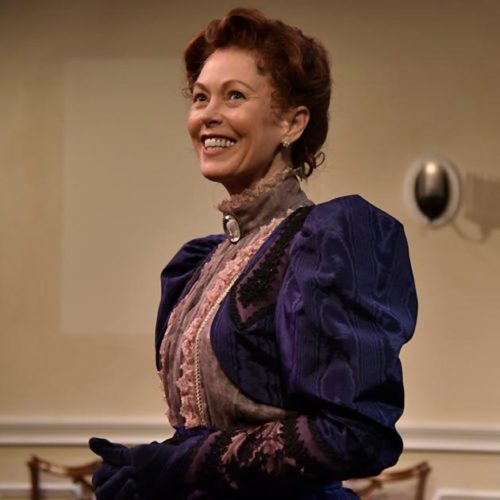 “A Doll’s House, Part 2” plays at Oklahoma City’s Civic Center Music Hall in the intimate CitySpace Theatre on the lower level.  Showing from November 8 through November 24, 2019, the show is a wonderful adult show that is suitable for all ages mature enough to watch a play.  The curtain goes up at 7:30 every Friday and Saturday evening with a 1:30 Saturday and Sunday matinee.   The Oklahoma City Civic Center Music Hall is located at 201 N. Walker Avenue.   For further information and tickets contact the Oklahoma City Repertory Theatre (CityRep) Box Office at 405-848-3761 or the Civic Center Box Office at 405-297-2264.  Visit CityRep on line at www.okcrep.org to know more about the great work being done by gifted professional performers in Oklahoma.