“Defending the Caveman” Diverts and Delights! 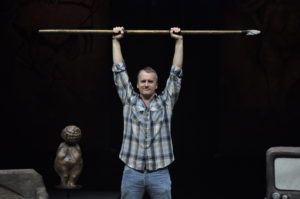 Anyone who has ever loved another of the opposite sex, whether spouse, parent, sibling or friend is often flummoxed trying to figure things out.  Countless novels, short stories, plays, songs and operas are written and performed with the battle of the sexes at the center of the plot.  But anyone who really does want to figure it out should see “Defending the Caveman” and, suddenly, it will all become clear.  That understanding comes with more laughs than a barrel of monkeys or a cave filled with their descendants.

“Defending the Caveman” was last seen in Oklahoma City in February, 2013, again with John Venable and thanks to Don Jordan of CityRep.  The resulting review states:  ‘A giggle becomes a chuckle, a chuckle becomes an exhilarating guffaw that is most infectious’ and that also holds true in 2017.

Rob Becker is the brilliant comic who originally wrote and performed “Defending the Caveman” a quarter of a century ago.  With a little updating now and again in order to use technologically modern terms the show is timeless.  The battle of the sexes will never be won and it will never be lost.  John Venable is the versatile performer bringing “Defending the Caveman” to Oklahoma audiences and he has a sensitivity that is remarkable.  Like all men, he doesn’t have a clue about how women really operate and that is okay because no woman has a clue about how men operate.  Understanding the opposite sex is not only impossible, it is unnecessary.  All one needs to do is accept the other sex has a different perspective and appreciate the difference.

‘Laugh yourself silly and fall in love all over again’  was also stated in the review from four years ago, and a very appreciative audience certainly did this past weekend just before Valentine’s Day.  Since he only comes the one weekend Mr. Venable promises he will return.  Since you are reading this after Valentine’s Day, 2017, the run is over, but that doesn’t mean you should miss it.  Tell the folks at CityRep to bring John Venable back again and perform “Defending the Caveman” for those who need to see it or see it again.  Call CityRep at 405-848-3761 and while making reservations for “Mr. Burn’s” opening February 24 tell them to bring “Caveman” back.  If you are reading this review at a later date, then you know you can make reservations to see “Defending the Caveman” because it worked!  It’s back!  We can all see it again.  Laughing like crazy and falling in love. Falling in love again with your spouse in all his (or her) ridiculous glory and with John Venable in all his equally ridiculous glory.

CityRep is one of Oklahoma City’s finest examples of artistic common sense.  They strive to make the audience laugh or cry, fantasize and dream, learn and discover and have fun growing.  Something new is coming—“Mr. Burns” a Post-Electric Play” opens February 24, 2017 and runs through March 5, 2017.  A co-production with the Oklahoma City University School of Theatre, “Mr. Burns” will play at the CitySpace Theatre at the Civic Center Music Hall.  Also, mark the calendar for Sunday, April 2, when Audra McDonald, a six (6!) time Tony award recipient will be performing.  CityRep takes us back to OCCC for this one night only!  There are now three reasons for folks to visit www.cityrep.com or call 405-848-3761 for tickets, information or compliments.