Children Shine in “Winnie the Pooh” 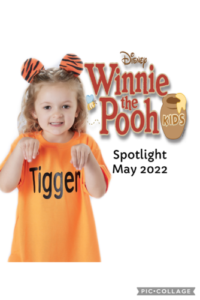 The production of “Winnie the Pooh” presented by the Broadway Babies at Spotlight Acting Academy was directed by Makenzie Boatright and Maya Cook.  Makenzie Boatright also wrote the book or adaptation for stage from the works by A. A. Milne and is also based on the Disney “Winnie the Pooh/Kids” version.  The music and Lyrics are by Richard M. Sherman, Robert B. Sherman, Robert Lopez and Kristen Anderson-Lopez.

This production was presented Sunday,  May 15 at 3:30 pm.  The staging took place on a beautiful set designed by Jonathan Beck Reed.  The play was presented by the entire cast standing in a line across the stage.  Center Stage an extension into the audience was placed with a single microphone where the cast members actually spoke their lines.  It was a long walk to the microphone for some of these young cast members! 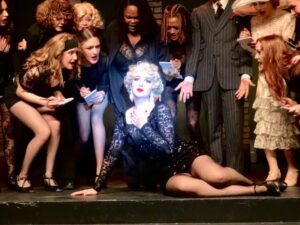 The musical numbers allowed the children to perform in a more natural way and the Broadway Babies had six songs to sing.  While singing the children provided appropriate movement that was quite well paced, although there were a few delightful variations.  By far the song that seemed to be a favorite was “The Wonderful Thing About Tiggers”, although all the songs were quite delightful.

Nevertheless, children in this age group are enjoyable performing at all times and this cast was certainly enjoyable.  Bee to bonnet, Bear to beehive, Winnie the Pooh and all the special friends of Christopher Robing all shined in their performances with bright eyes.  The event bolsters the confidence of future performers as well as students in general giving their school careers a leg up which is why classes are advisable for everyone, shy, outgoing, energetic or enthusiastic, children benefit from the experience.

While this semester is over, look for classes during the summer.  Summer productions are “Mary Poppins Jr” performed by Broadway Babies, Razzle Dazzle and Broadway Bound.  For information about acting classes conducted from Spotlight Academy or dance classes from Dance Unlimited visit www,danceunlimitedpac.com.  The facility is conveniently located on Hefner Road at 514 S. Bryant Avenue. 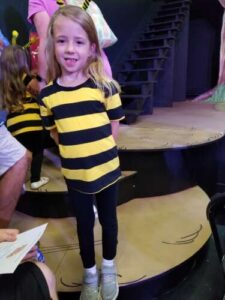 My Grantdaughter! Scarlett Edwards as a Bee in “Winnie the Pooh” at Spotlight Acting Academy. Photo courtesy of Elizaberh Hurd