UPDATE: Charles Dickens brought to Life at The Harn Homestead with Lyric Theatre’s A Christmas Carol 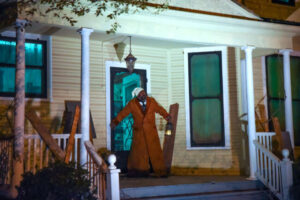 Ebenezer Scrooge comes to life again at Harn Homestead with W. Jerome Stevenson as the irascible miser in the role.  The show will continue to alternate the Holly and Ivy casts with Stevenson and Kaleb Michael Bruza as Mr. Bob Cratchit headlining.  There is absolutely no difference between the productions in effect, but there are subtle differences that make comparing the two casts extremely interesting.

When the ghost of Jacob Marley appears, Scrooge reacts with the line ‘there is more of gravy about you than the grave” and the possibility of Scrooge’s vision being due to a ‘bit of underdone potato”  To carry the roasting metaphor along, this is a roast where Scrooge enjoys a bit of horseradish sauce with his roast and Jonathan Beck Reed does not.  In other words, Stevenson is slightly more bitter and strident in his interpretation and Bruza’s reaction is unique to that interpretation.  One characterization is not better than another, but each gives the audience a perspective that is very real and hopeful.

The Harn Homestead in Oklahoma City is just south of the capital complex on Lincoln Boulevard and is a fascinating place to visit.  It is also the ideal setting for the show “A Christmas Carol” and evokes the Dickensian flavor, even though it is not a London setting.

The flavor is different for each cast but the resulting effect is the same for the audience and while the different combination of casts brings slightly altered interpretations to the table, each perspective is valid and fascinating.  So, it is not too late to see “A Christmas Carol” at the Harn Homestead and take advantage of the wonderful Christmas spirit engineered by Michael Baron and Ashley Wells.

The Harn Homestead in Oklahoma City is a delightful place to host Lyric Theatre’s annual production of Dicken’s A Christmas Carol.  The various locations with slight adaptation work well to present each scene allowing the audience to move from one location to another.  There is always a bit of adjustment but everyone is very accommodating to make room so that the younger children can move up front to see, and to pick up the occasional old lady if that is needed.  It is essential to dress more warmly than the weather prediction, it is not hard to carry an extra blanket, but it is hard to carry a shivering kid. 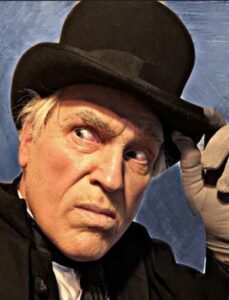 The Holly cast begins the tale November 16, 2021 led by the fabulously talented Jonathan Beck Reed as Ebenezer Scrooge.  He is joined by the equally talented Charlie Monnot as Bob Cratchit, the timid clerk Scrooge relentlessly torments.  Susan Riley returns as Mrs. Cratchit as well as a few cameo roles and Mariah Warren is wonderful as Mrs. Dilbert among others.  A favorite character is the Ghost of Christmas Past, delightfully performed by Emily Pace as well as Caleb Barnett as the Ghost of Christmas Present.  Matthew Alvin Brown is Fred whose sense of family and generosity make Scrooge’s transformation so important also narrates.  Andi Dema is always a delightful Topper and Marley is still terrifying with Jason Bias creating an imposing apparition.  The cast also includes Charlee Barks as Fan, Scrooge’s young sister, Kaylene Snarsky as Belle, Kiara Tourneau as Belinda and Saxon Neal as Young Scrooge.  The Audience Hosts are very helpful in creating the mood and leading the audience and they are Carter Haney, Crayton Haney, Selena Simmons and Abigail Ruth Manners.  The entire cast manages to bring a sense of finesse to the outdoor setting making this version, although quite different from standard performances so outstanding.  The coldness of the season is appropriate and adds to the overall sentimentality of this classic.

Michael Baron has directed Dicken’s classic for many years and alongside choreographer and co-director, Ashley Wells they have put together a wonderful way to bring this longstanding Christmas tradition to Oklahoma audiences without sacrificing any of the artistic integrity established by Charles Dickens.    Puppet designer Penny Benson creates a beautiful work with Tiny Tim.  Yes, he is done as a puppet, and while this would not work well in the usual theatrical setting it does work nicely in the outdoor performance as the cast members handle the situation competently and sensitively. Brian T. Hamilton is Musical Director, lighting is by Fabian J.Garcia, and the beautiful costumes are from Jeffrey Meek. Technical direction is by Adam Koch and sound is by Brad Poarch and Corey Ray.  Courtney Strong handles the props.

One can see that elements of this performance may even be retained for future years, and it is certainly something to consider for future performances to be done at the Harn Homestead, although not all of them.  It is a good solution for the pandemic that may be a good alternative for some future performances when the weather is good for the experience.  Walking along the tidy pathways of the Harn Homestead puts one in exactly the right time period for A Christmas Carol and in that time period, people were more attuned to being outdoors even in the cold dreary London of the day.

The upcoming Ivy cast is filled with equally talented performers and led by the incomparable W. Jerome Stevenson as Ebenezer Scrooge.  Be sure to contact Lyric Theatre’s Box Office and arrange for tickets on their website at www.lyrictheatreokc.com or call the box office at 405-524-9312.  Performances will continue through December 23, 2021, weather permitting.