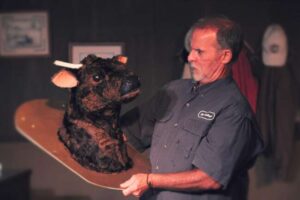 Mia McCullough is a talented playwright with many awards to her name.  Her play titled “Chagrin Falls” is currently being presented at 3rd Act Theatre in Oklahoma City.  Amandanell Bold directs a cast of four men and two women. The action takes place in the small Oklahoma town, Chagrin Falls, named for a four-foot cascade outside of town.  Oklahomans can be a rather self-deprecating lot, and initially the townsfolk seem rather defensive about where they live and work.  As the first act progresses it becomes refreshingly noticeable that the characters are not depicted as the typical odious residents of flyover country, but rather they are intelligent members of the working class without the hillbilly hick often depicted in the media.  Yet it soon becomes evident that the gloomy countenance of most folks is not undeserved.  The town’s economy is depressing.  Not in the sense of poor performance, it is simply that the industry in Chagrin Falls revolves around death.  There are two industries employing residents and everyone in town is directly or indirectly dependent on them. The fictional Chagrin Falls hosts a maximum-security prison that handles executions employing a large number of residents as guards and support personnel.  The other industry in town is a slaughterhouse, employing most of the remaining residents.  There are a few ranches and farms, as well as shopkeepers and all employment options are either directly or indirectly dependent upon the business of corporate killing.

The local watering hole is the bar/diner located in the Delford Hotel in the small downtown district.  The proprietor is Irene Delford a long-standing member of the community.  She is preparing for guests, the family of a crime victim who are coming to witness the execution of the man responsible for the death of a loved one.  Additionally, she welcomes a journalism student who is doing a story on the execution, a young Asian-American, Patrice Dougherty.  Several local gentlemen also drop by, Riley McDougal, recently retired from the slaughterhouse and in mourning for the recent death of his wife.  Also, the local Reverend, and two of the prison guards. The Reverend does his best to comfort his flock and also functions as Prison Chaplain. Thaddeus Newell and Henry Harcourt are the two guards, very different in personality.   Thaddeus is a young and very depressed man waiting for the death of his beloved mother who was once Irene’s great friend.  Henry is a hail-fellow well met kind of guy, strangely unaffected by the gloomy stench of death that permeates the town.  The group of six must deal with their own personal demons that have been so greatly impacted by the foundation of this town’s survival.  Each has their own grace and humanity.

“Chagrin Falls” is a cerebral play and McCullough is a master of dialogue.  In this age of action-packed movies, audiences often have a hard time focusing on a piece as wordy as the show is in spite of McCullough’s mastery at dialogue.  Amandanell Bold directs “Chagrin Falls” boldly creating interesting moments that hold the attention of the audience and she makes the most of the action that does take place as well as the dialogue. 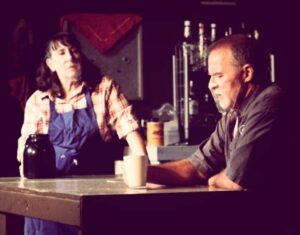 Anna Holloway as Irene Delford and Rob May as Riley McDougal converse over coffee at the Delford Hotel Bar. Photo courtesy of April Porterfield.

Anna Holloway is Irene Delford, practical and productive.  She has captured the heart-of-gold ambience that keeps her friends and customers loyal and sane.  Rob May is Riley McDougal, a long-standing friend who has made the Delford Hotel his home away from home as his own house is filled with so many memories.  Unfortunately, memories travel with him.  J. Harlan Henry is Thaddeus Newell, and he frequently spends time at the Delford helping Irene, fishing for the restaurant, and Irene prepares dinner for him and also for his mother.  Dakota Lee Bryant is Henry Harcourt full of bubbly good humor and grace, a happily married young man filled with optimism for the future.  The Reverend is played by Grant Brittan, a relative new-comer to Chagrin Falls having arrived from New England recently.  He sees a great deal of tragedy in his profession and in his short time in Chagrin Falls has already walked the last stretch to the death chamber with 14 convicts. 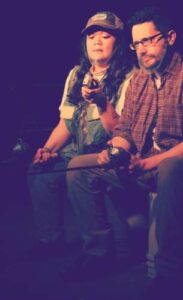 Vivian Le is the young woman reporting on the upcoming execution, Patrice Dougherty.  She seems to have a rather unprofessional approach to the interviews that she conducts and her primary interest in speaking to the convict facing death is clearly the focus of her visit.  It becomes quickly apparent that she has a hidden agenda in doing so.  Patrice is searching for answers, and while she may not find the answers she searches for, she may be surprised at what she does learn.  And that is the hope conveyed within this tragedy-all the characters search for answers, but find that the questions they have about life may not actually be the questions that need answers.

“Chagrin Falls” is not a family show, it is a rather mundane tragedy and a dynamic example of the human condition.  And, as such, it is a valuable show for audiences looking for more than simple entertainment.  The performers do an excellent job of creating multi-dimensional and interesting characters that are likeable, human and interesting.

Rob May is particularly brilliant in his performance of the conflicted Riley McDougal.  A Viet Nam veteran, Riley carries the weight of that war on his shoulders, carefully concealed from his family and conscious self as he spends the large part of his life as a family man working hard and cherishing his beloved wife.  Now, with her loss and his retirement from the slaughterhouse he again faces the plight of the common man and the recognition of his own mortality for the first time in a frightening way.  May deftly defines Riley’s tortured realization of his own actions revealing an imperfect man, striving always to be a good man.

Harlan Henry as Thaddeus Newell and Dakota Lee Bryant both perform superbly creating characters of depth and personality. Grant Brittan develops a genuinely concerned man of God conquering his own demons as he helps or at least tries to help the members of the community and the prisoners he ministers. Vivian Le as the young woman and Anna Holloway as the experienced woman command the interest of the audience without fail.  David Burkhart provides the voice-over.  The efforts of the entire cast serve to create individual characters that are full of depth and are people we would be proud to know as they grapple with universal problems in our time.

Bold’s direction is solid as well as creative and she is assisted by an excellent crew.  Christine Jolly is stage manager with Liz Holmes assisting.  Don Taylor designs the set and Michele Fields the lights.  J. Harlan Henry is the fight choreographer as well as one of the fighters and the costumes are from Dakota Lee Bryant.

Dakota Lee Bryant as Henry Harcourt and Rob May as Riley McDougal over a beer at Chagrin Falls Delford Hotel. Photo courtesy of April Porterfield.

“Chagrin Falls” plays at 3rd Act Theatre in the Shoppes at NorthPark Mall, 12040 N. May Avenue in Oklahoma City.  Showtimes are  Friday and Saturday at 8:00 pm and Sunday Matinees at 2:30 running through November 7, 2021.  The pandemic is ending and to ensure that it does, face masks are still required for patrons.  The actors will be wearing face shields and they are handled quite adeptly.  There will be a 15-minute intermission.  This is a show that is unforgettable and worthy.