Carpenter Square Presents the Colorful White Guy On the Bus 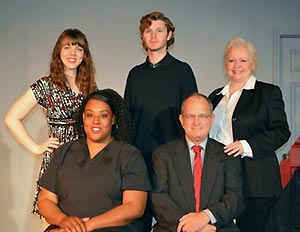 The cast of White Guy on the Bus. Photo courtesy Carpenter Square Theatre.

Bruce Graham’s 2017 drama White Guy on the Bus offers a surprising and honest take on race relations in the U.S. Bringing a personal touch to the subject matter, Carpenter Square Theatre tackles this heavy topic with a strong cast. Terry Veal is Ray, the titular White Guy who sits on a city bus every week and befriends a black mom who travels the same route for school and work. Time flashes backwards and forwards, showing the audience Ray’s life with his wife Roz, played by Laurie Blankenship, and their conversations with unofficially adoptive son Christopher, played by Ian Marino.

Veal is nerdy and awkward, undoubtedly a richly developed quirk of his character. Veal portrays a once happy man who quickly spirals out of control as his life falls apart. That undoing is chilling, and Veal leaves the audience cringing back while inching closer to the edge of our seats. Blankenship as Roz is boisterous and confident, an English teacher in inner-city Philadelphia schools. She’s sure of herself and her place in the world. A challenge is presented in Christopher’s wife Molly, played by Julia Seely. Seely and Blankenship spar at family get-togethers, gesturing angrily with their wine glasses as the conversations heat up. Both women are courageous in their convictions. Together they speak on the subtle and important race and class issues that still plague our country to this day.

Nykezia Giles is Shatique, the nursing student who Ray befriends on his daily commute on the bus. Giles carries a burden with her. That burden of knowing your life circumstances may never improve, no matter how hard you work. Giles, too, is convicted in her plight and determined in her beliefs. Giles and Veal create an interesting dynamic. They’re unsure of each other, then they reach a level of friendly comfort. Then that level of camaraderie is shattered as harsher truths come to light.  Giles and Veal make a somewhat rocky transition from friend to enemy. But, that is the intention of the play, and it’s carried off well by both. This play is jarring and shocking, which makes it true to real life. It sends the accurate message that life can change without warning, knocking you off the course you thought you were on.

White Guy on the Bus exists mostly in two person conversations. There are a few group scenes, but mostly the actors relate to each other one on one. Veal’s relationships with each of the other characters develop and show you not just who he is, but who he becomes. His relationship with Ian Marino as Christopher is a loving one. Marino meets the high standard set by Veal in each scene, sparking flickers of love and anger into thorough, passionate exchanges. Marino has moments where nerves seem to beset him, but he works through it. Opening weekends are hard for everyone, and as he sinks into the character, those opening night jitters will surely smooth over. 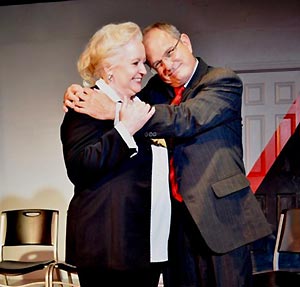 Production Director Doobie Potter makes intentional choices with the characters, set and costuming. A succinct color scheme is displayed throughout the show, reminding the audience that the world itself is not black and white. Costumes, set design, and props all follow through with this same theme, and it makes for a fun night of looking for “Easter eggs” in each scene. Potter is a talented and unique director, who’s created a poignant and bold play.

White Guy on the Bus forces us to look inward. There’s at least one character or conversation we can all recognize in someone we know or even in ourselves. It’s a conversation starter for some important topics that need to be talked about, and the performances are powerful and well-done.

*CST is moving after Season 35, to their new home at 1009 W. Reno. The move will happen in time for Season 36, which begins in September.